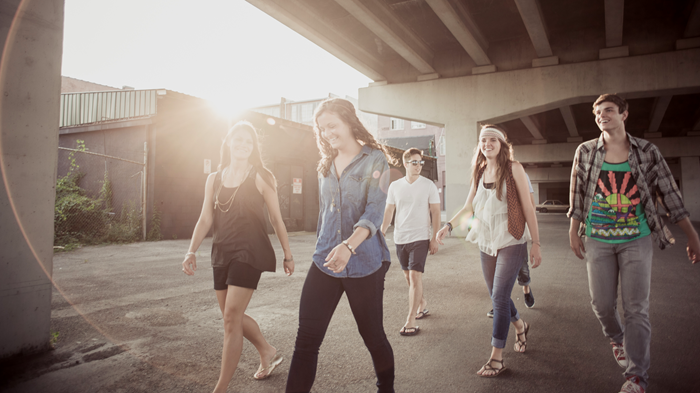 Imagine Generation Z—the 70 million kids born between 1999 and 2015—and you probably picture them staring at their devices. A bunch of app-savvy, tech-addicted teens who never knew a time before smartphones.

Half of Protestant youth pastors consider technology and social media the defining factor of this latest generation, but a new study released today by Barna Group sheds new light on striking social and demographic trends: Teenagers in Gen Z are at least twice as likely as American adults to identify as LGBT or as atheist.

These are important markers of identity among the youngest segment of America, and pose new ministry challenges for the church.

While the latest Gallup poll reported only 4.1 percent of Americans—and 7.3 percent of millennials—identify as LGBT, Barna found that 12 percent of Gen Z teens described their sexual orientation as something other than heterosexual, with 7 percent identifying as bisexual.

This generation is more sensitive to LGBT issues overall, with 37 percent saying their gender and sexuality is “very important” to their sense of self, compared to 28 percent of their Gen X parents.

Additionally, about a third of teens know someone who is transgender, and the majority (69%) say it’s acceptable to be born one gender and to feel like another.

Though teens exploring sexual identity have long been a part American churches and youth groups, they haven’t always been this open about their identity and willing to address it so transparently.

“It is a new challenge for student ministry leaders, because there is more discussion in the public square regarding LGBT issues,” Ben Trueblood, director of student ministry for LifeWay Christian Resources, told CT.

“In the past, it was possible for difficult issues like this to be brushed aside or go unaddressed entirely. But that approach cripples the purpose of student ministry,” he said. “Now, student ministry leaders are forced to teach what the Bible says on these issues, as well as equip teenagers to respond biblically.”

Among Gen Z members between 13 and 18 years old, 13 percent consider themselves atheists, compared to just 6 percent of adults overall.

Meanwhile, 59 percent of Gen Z identifies as Christian, compared to 68 percent of adults. Only 1 in 11 teens is considered by Barna to be an “engaged Christian,” a category the research organization uses for those whose beliefs and practices are shaped by their faith (i.e., not “Christian in name only”).

“This new study shows that Gen Z has a highly inclusive and individualistic worldview and moral code,” said Brooke Hempell, Barna senior vice president of research, who released the study in partnership with the Impact 360 Institute, a teen ministry. “They see the world and themselves in strikingly different ways than their Gen X parents.”

A recent issue of LifeWay’s Facts and Trends magazine focused on ministry to Gen Z, calling it the “post-Christian” generation since so many are being raised by millennial and Gen X nones who don’t ascribe to a particular faith tradition.

“Previous generations grew up with some Judeo-Christian values of the past, at least as a reference point,” said one student minister, Rick Eubanks of Oak Grove Baptist Church in Burleston, Texas.

Among Christian teens, Barna found that most—79 percent—feel comfortable sharing “honest questions, struggles, and doubts” with their parents. Fuller Youth Institute has pointed to this level of trust as crucial for helping kids grow and keep their faith.

“Every young person needs to know that all of their questions, complaints, doubts, and struggles have a hearing,” said Brad M. Griffin, the institute’s director. “They need to know that you—and God—are going to hear and hold the questions without pushing the young person away.”

One out of five teens in the Barna study imagine Christianity as negative and judgmental. Some of the biggest barriers to belief are the problem of evil (29%), perceived hypocrisy among Christians (23%), and the conflict between science and Scripture (20%). Gen Z is less likely than older generations to see science and the Bible as complementary. 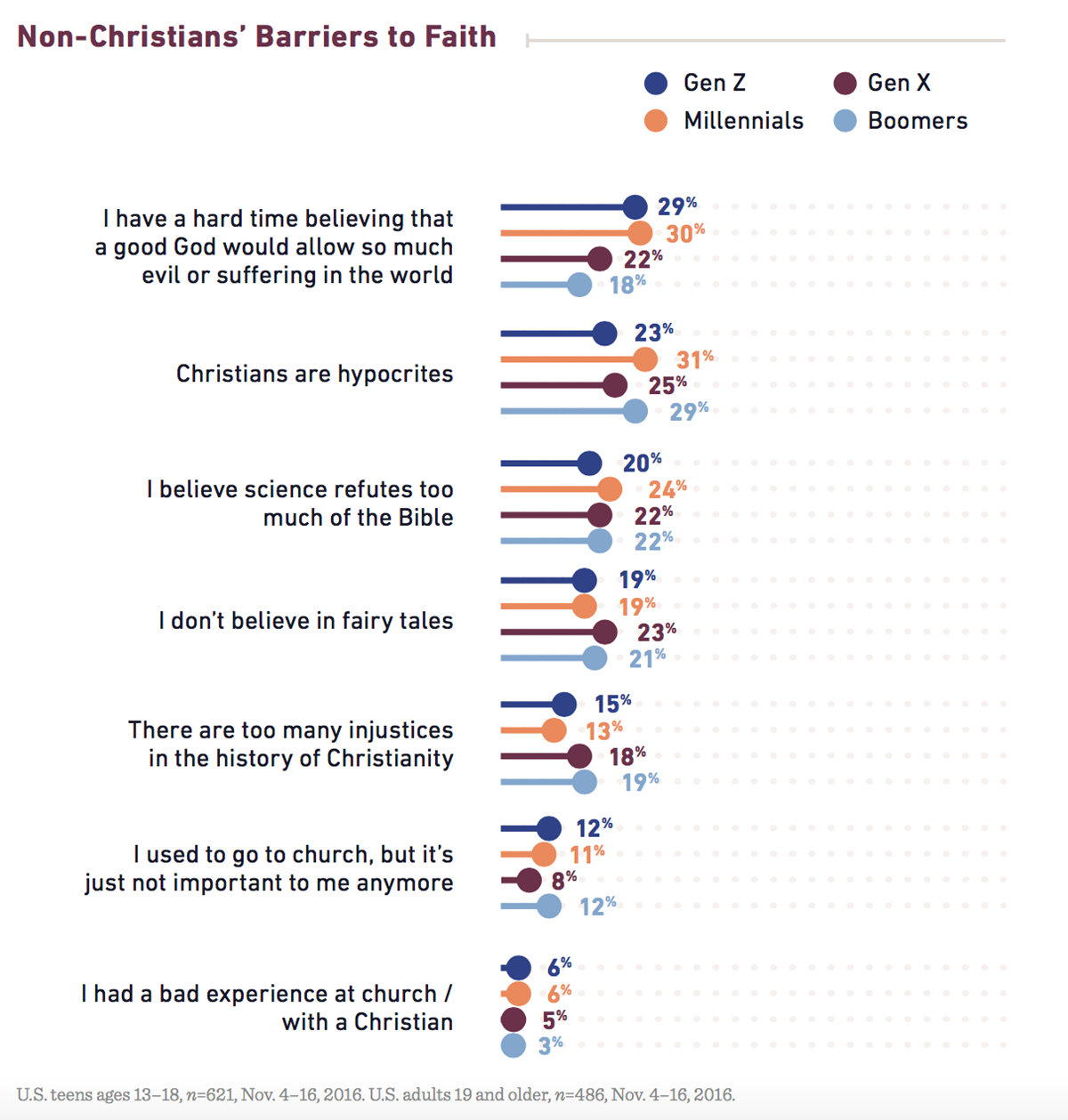 In Facts and Trends, Gen Z Christian and college student Jessica Berlin warns that her peers often see religion as oppressive, so parents and leaders should focus on Christianity as a relationship with Christ.

Teens’ approaches to social and spiritual issues reflect an evolving worldview shaped by the cultural events that defined their upbringing as well as their use of social media. In the Barna survey, a third of youth pastors say their biggest struggle is “undoing” what the world teaches teens.

Pastor James Emery White writes in the 2017 book Meet Generation Z, “Members of Generation Z hold few things dearer than acceptance and inclusivity. They view many moral stances, such as opposing gay marriage, as social stances in line with racism. To them, acceptance means affirmation.” 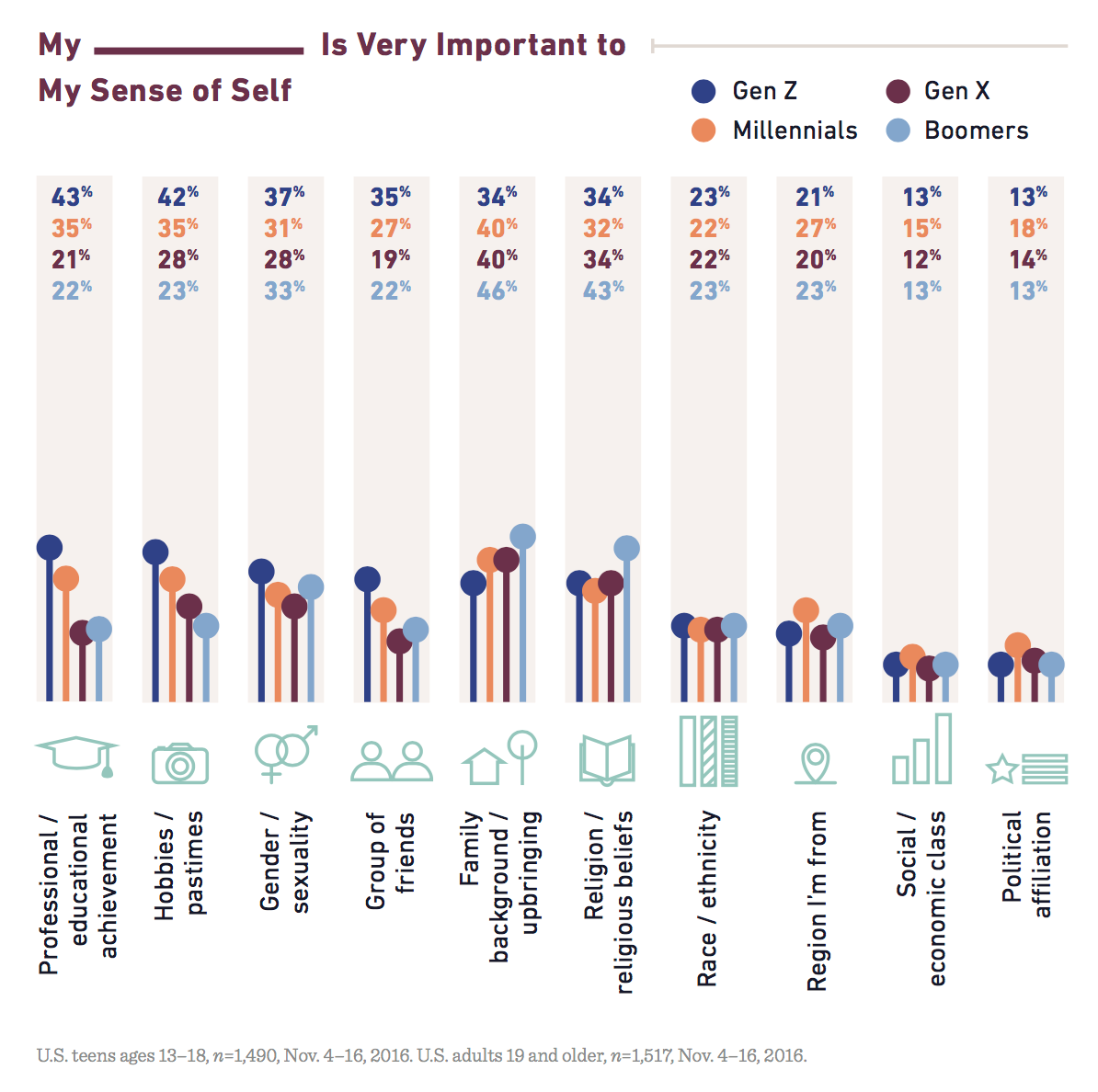 These teens have experienced diversity on a different scale than most adults; half are nonwhite, making them the most racially and ethnically diverse generation in American history, Barna said.

And yes, they officially love their screen time: more than half (57%) are on their devices four or more hours a day, and more than a quarter (26%) are on them eight or more.

A recent study out from Baylor University has noted a correlation between increased Internet time and decreased religious affiliation.