Most think persecution is severe, but only half are very concerned or strongly support asylum or financial aid.
Sarah Eekhoff Zylstra|March 13, 2018 10:14 AM 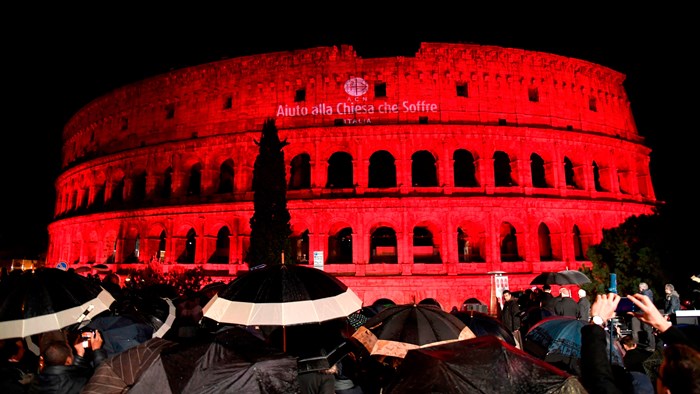 The Colosseum in Rome was recently lit up the color of blood.

“This is a symbol of the persecution of Christians in the entire world—those who suffer because of faith,” stated Alfredo Mantovano, president of the Italian chapter of Aid to the Church in Need (ACN), the global Catholic organization which sponsored the February 24 light display.

“We light up the Colosseum with red because their shed blood cannot leave us indifferent,” he stated. “We cannot wash our hands of the blood of this injustice as Pontius Pilate did 2,000 years ago.”

The reminder was a timely one for Catholics in the United States, according to a survey released this month. While 9 in 10 believe that persecution of Christians around the world is somewhat or very severe (51% and 40%, respectively), only half said they were very concerned (49%). Almost 1 in 5 said they were not concerned at all (18%).

Instead, the study of 1,000 Catholic adults (conducted online in January by ACN’s US branch and McLaughlin & Associates) found that they worry about other issues more.

Then comes Christian persecution (49% very, 33% somewhat). It’s close behind, but has the lowest level of concern out of the five issues surveyed, as well as the highest share of those with no concern: Christian persecution (18%), climate change (16%), refugees (14%), human trafficking (7%), and poverty (6%).

As John Allen, a veteran Catholic journalist and analyst, noted for Crux, the results reveal “a relatively low level of urgency among American Catholics about coming to the aid of persecuted Christians.” 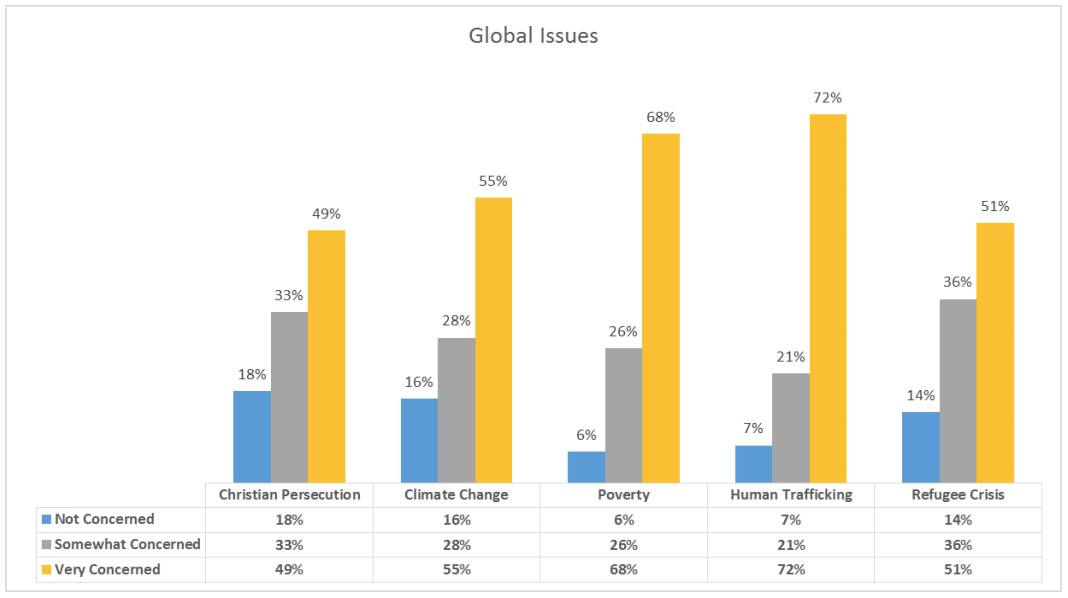 “The survey reveals quite clearly that there is a need to increase the engagement level of the US Catholic Church when it comes to global Christian persecution—both at the grassroots and leadership levels,” stated George Marlin, chair of ACN-USA.

Three out of five American Catholics said that Christians experience less than half of religiously-based attacks around the world.

They’re incorrect: Researchers with Under Caesar’s Sword, a $1 million Templeton Religious Trust study, found that Christians experience between 60 to 80 percent of the world’s religious discrimination. (More of it is experienced by evangelicals/Pentecostals than by Catholics.)

American Catholics were more accurate when ranking the top five worst persecutors of Christians out of 16 nations. Their picks: North Korea, Iran, Iraq, Syria, and Pakistan.

Two of their picks match one of the most respected rankings, Open Doors’s World Watch List, which ranks the top 5 persecutors of Christians as North Korea, Afghanistan, Somalia, Sudan, and Pakistan. Iraq is No. 8, Iran is No. 10, and Syria is No. 15.

On a personal level, many said it was very important to pray (64%), to raise awareness at the parish level (56%), and to contact members of Congress (49%). 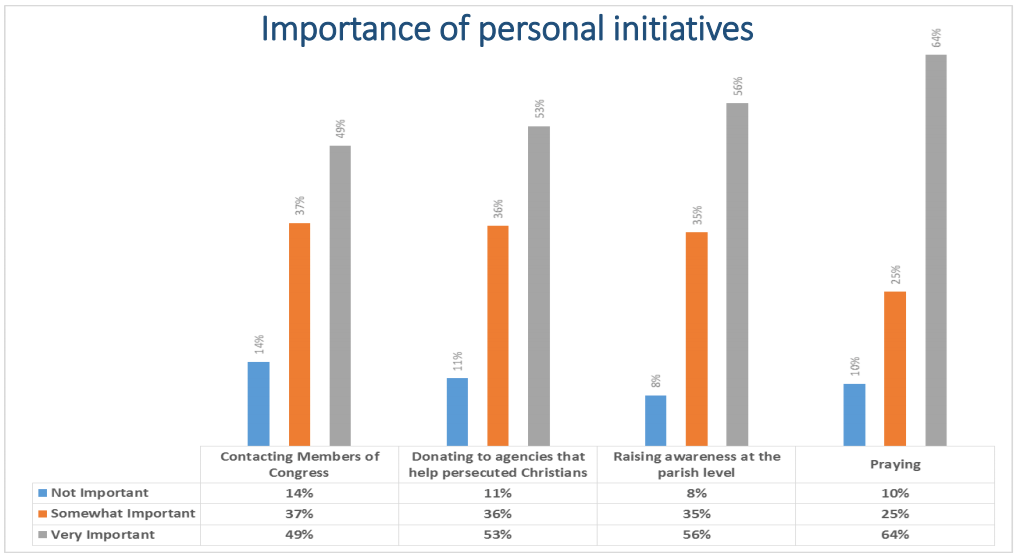 About half said it was very important to donate to agencies that help persecuted Christians (53%); more than half said they have done so in the past year (53%).

“Giving increases among regular Mass-goers,” the report stated. “The majority of those who do not regularly attend Mass do not give to any organization.”

Pope Francis often references the persecuted church, and American Catholics have noticed. Four out of five said he was very (49%) or somewhat (33%) engaged on the issue, higher than they ranked US bishops (27% very, 39% somewhat) or their local parish (24% very, 42% somewhat). 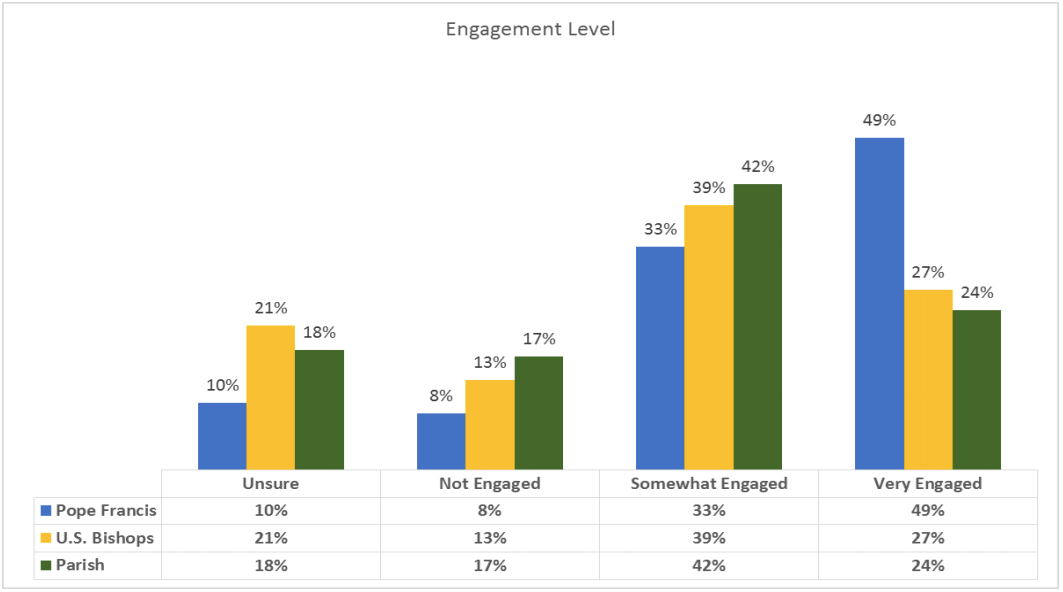 “There is a need to better inform and engage the Catholic audience,” Marlin stated. “There is an obligation to keep the spotlight on the topic and showcase the seriousness and pervasiveness of Christian persecution around the world.”

Other findings of the survey include: