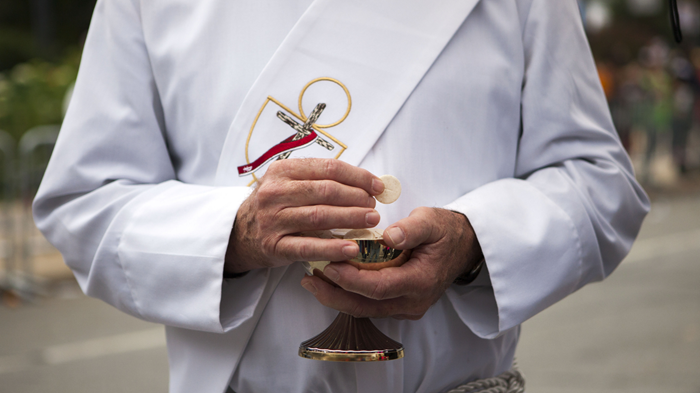 Three-quarters of German bishops approved the measure earlier this year. But those critical of the move questioned whether the national conference had the authority to expand who was eligible to receive communion, a sacrament generally reserved for members of the church in good standing and only offered to non-Catholics “in grave and pressing need.”

The German proposal aims to accommodate Catholics in mixed marriages and requires spouses to “affirm the Catholic Eucharist” in order to participate. The bishops cited cases where “the spiritual hunger to receive Communion together … is so strong that it could threat the marriage and the faith.”

Heinrich Bedford-Strohm, president of the German Protestant Church (EKD), said the news from Catholic leaders was “an important step in our ecumenical past,” particularly as leaders of both bodies push for unity following last year’s 500th anniversary of the Reformation.

The move to extend Communion to interfaith couples represents a pastoral impulse that plenty of Christians could appreciate; here in the US, a quarter of married Catholics have non-Catholic spouses, 14 percent of whom are practicing Protestants.

“While theologically initiated Protestants normally—and rightly—abstain from taking the Eucharist, seeing in it a theurgic act that runs roughshod over Scripture, many others view it simply as a fellowship meal, one in which they naturally want to participate alongside of a spouse or loved one,” said Chris Castaldo, an expert on evangelical-Catholic engagement and the lead pastor of New Covenant Church in Naperville, Illinois.

“Such people may not be ready to kiss the papal ring or sing the Ave Maria, but they wish to celebrate the table among Christians with whom they’re in intimate communion. Catholic teaching, however, does not currently allow this.”

Experts say there are good theological reasons for Protestants, despite their desire for unity among the churches or shared spiritual practices in marriage, to be cautious over an invitation to “affirm the Catholic Eucharist,” which is deeply tied to the Catholic understanding of the church and salvation.

If a Protestant were to consider potential participation in Holy Communion during a Catholic Mass, “I would want them to go into this with their eyes wide open, theologically speaking, not sloppily,” said Beeson Divinity School dean Timothy George, an “open-table Baptist” when it comes to Communion and a leading voice in dialogue between evangelicals and Catholics.

“To affirm the Catholic Eucharist is, in a way, to affirm the pope overall,” he said. “It’s a way to affirm the priest, who doesn’t just represent Christ, he’s alter Christus,” or believed to be celebrating the Mass in the place of Christ.

Catholics inside and outside Germany have also raised theological concerns over extending Communion to Protestant spouses.

Cardinal Gerhard Ludwig Müller, a German bishop who formerly served as prefect of the Congregation for the Doctrine of the Faith (the Vatican body designed to safeguard church doctrine against heresy), wrote for First Things that participation in sacraments requires believers to be all-in with Catholicism:

There has certainly been significant progress in the Catholic Church’s dialogue with various Protestant communities. Nonetheless, the Catholic Church cannot stray from the essential doctrines of the faith that concern her own mission and the sacraments she dispenses. If she did, she would become unfaithful to Christ.

It is not enough for a non-Catholic Christian selectively to accept for him- or herself some of the Church’s teachings and reject others or consider them unimportant. If Protestant Christians come to the inner conviction that in their conscience they affirm the whole Catholic faith and its ecclesial form, then they must also seek full visible communion with the Catholic Church.

Along the same lines, the US Council of Catholic Bishops (USCCB) states, “Because Catholics believe that the celebration of the Eucharist is a sign of the reality of the oneness of faith, life, and worship, members of those churches with whom we are not yet fully united are ordinarily not admitted to Holy Communion.”

This week’s Vatican meeting will take place between Monsignor Luis Ladaria Ferrer, who currently leads the Congregation for the Doctrine of the Faith; Cardinal Kurt Koch, president of the Pontifical Council for Promoting Christian Unity; and German church leaders including Cardinal Reinhard Marx, head of the German bishops conference.

The conversation over differing views of Communion dates back centuries in Germany. At the 1541 Colloquy of Regensburg, just decades after the Protestant Reformation, Catholics and Protestants were able to agree on the doctrine of justification but were gridlocked once the conversation turned to the Eucharist, according to Castaldo, himself a convert from Catholicism.

“It’s hard to imagine intercommunion getting traction in the US at this time, given the influence of conservative bishops,” he said. “The situation in Germany is nevertheless significant as an indication of Rome’s magisterial elasticity. All roads may not lead to Rome any longer, but the via Roma has a way of radiating outwardly to the Church Catholic.”

Similarly, a preview of this week’s meeting by the Catholic site Cruxnotes some ironies of the German bishop’s request to Pope Francis, who’s “striving to be a decentralizing pope in a highly centralizing era.”

For evangelical leaders like George, a decision to keep Catholic communion closed to Protestants does not represent a failure of ecumenical progress. The goal of dialogue between the two traditions shouldn’t be forced accommodation in the name of unity.