The #MeToo Movement Has Educated Pastors. And Left Them with More Questions.

More pastors say they are addressing these issues from the pulpit. Still, half say they lack training in how to address sexual and domestic violence.
Bob Smietana - Facts and Trends|September 18, 2018 09:00 AM 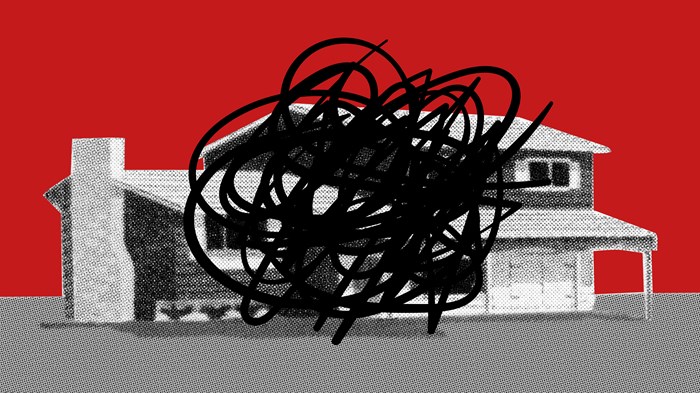 In recent months, churches have been rocked by high-profile accusations of sexual misconduct among clergy.

More accusations are likely to come—from congregations big and small.

Two-thirds of pastors say domestic or sexual violence occurs in the lives of people in their congregation. And many pastors believe the #MeToo movement has made their churches more aware of how common sexual and domestic violence are.

More pastors say they are addressing these issues from the pulpit. Still, half say they lack training in how to address sexual and domestic violence.

Those are among the findings of a new study on pastors’ views on #MeToo and sexual and domestic violence in churches from Nashville-based LifeWay Research. The study, sponsored by IMA World Health and Sojourners, is a follow up to a 2014 survey.

“Pastors are starting to talk about issues like sexual harassment and domestic abuse more than in the past,” McConnell said. “They don’t always know how to respond—but fewer see them as taboo subjects.”

Most aware of #MeToo

For the study, LifeWay Research conducted a phone survey of 1,000 Protestant senior pastors earlier this year—then compared the results to a similar survey in 2014.

Twelve percent of Protestant pastors say someone on church staff has sexually harassed a congregation member at some point in the church’s life. Eighty-five percent say no staff member has been found to have done so. Three percent don’t know. Pentecostal (94%) and Baptist (89%) pastors are more likely to say there has been no harassment found. Christian/Church of Christ (79%) and Presbyterian/Reformed (79%) pastors are less likely.

Eighty percent of pastors say their church has a policy for sexual harassment allegations against staff. Nineteen percent say they don’t have a policy. Two percent don’t know.

A few pastors have firsthand knowledge of abuse. One in 5 pastors say they personally have experienced domestic or sexual violence. Four out of five say they have not.

The #MeToo movement has prompted some pastors to action. It also appears to have led to some confusion among pastors and their congregations. 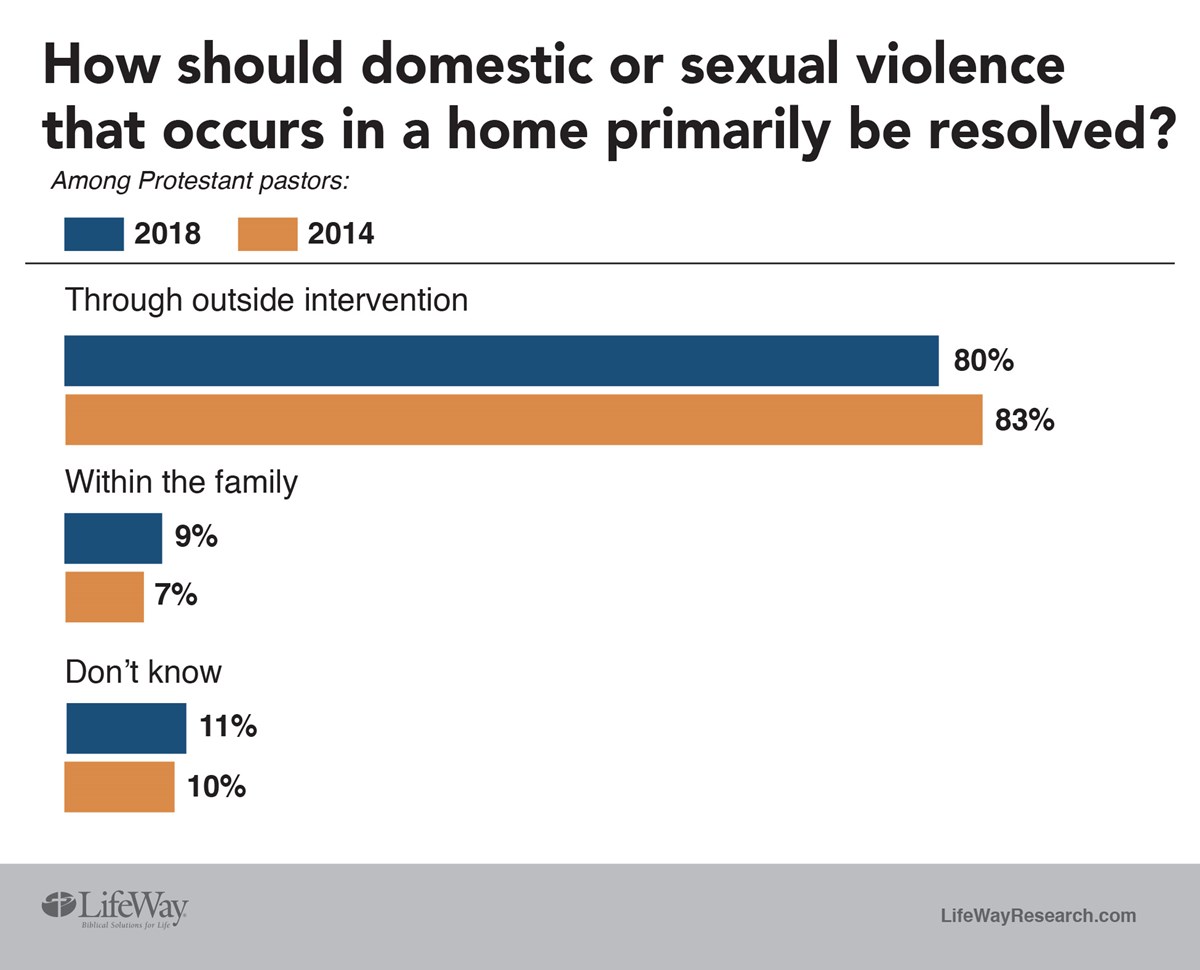 Methodist (57%) and Presbyterian/Reformed (52%) pastors are more likely to say they will preach more about sexual and domestic violence. Fewer Lutheran (37%), Church of Christ/Christian (36%), Baptist (30%) and Pentecostal (24%) pastors say they are now more inclined to preach on those topics.

Forty percent of those who have heard of #MeToo say they understand issues of sexual and domestic violence better because of the movement. Twenty-one percent say their understanding of the issues has not changed. Thirty-nine percent say they now have more questions.

Congregation members also have questions, according to pastors.

A few (14%) say their congregation has become callous toward the issue.

Among other findings about pastors who have heard of #MeToo:

“We are encouraged that more and more pastors are speaking out and seeking training to make their churches safer sanctuaries for survivors of violence, but the results also show that we—as a Christian community—still fall short,” said Sojourners President and Founder Jim Wallis.

“If we believe that how we treat the most vulnerable is how we treat Christ, we must be in deep solidarity with the women and men who experience domestic or sexual abuse at some point in their lives,” Wallis said. “If we believe we are all created in the image of God, we cannot tolerate that only half of pastors feel prepared to respond to domestic and sexual violence situations.”

For the study, LifeWay Research asked Protestant pastors a series of detailed questions about how they handle the topics of sexual and domestic abuse. 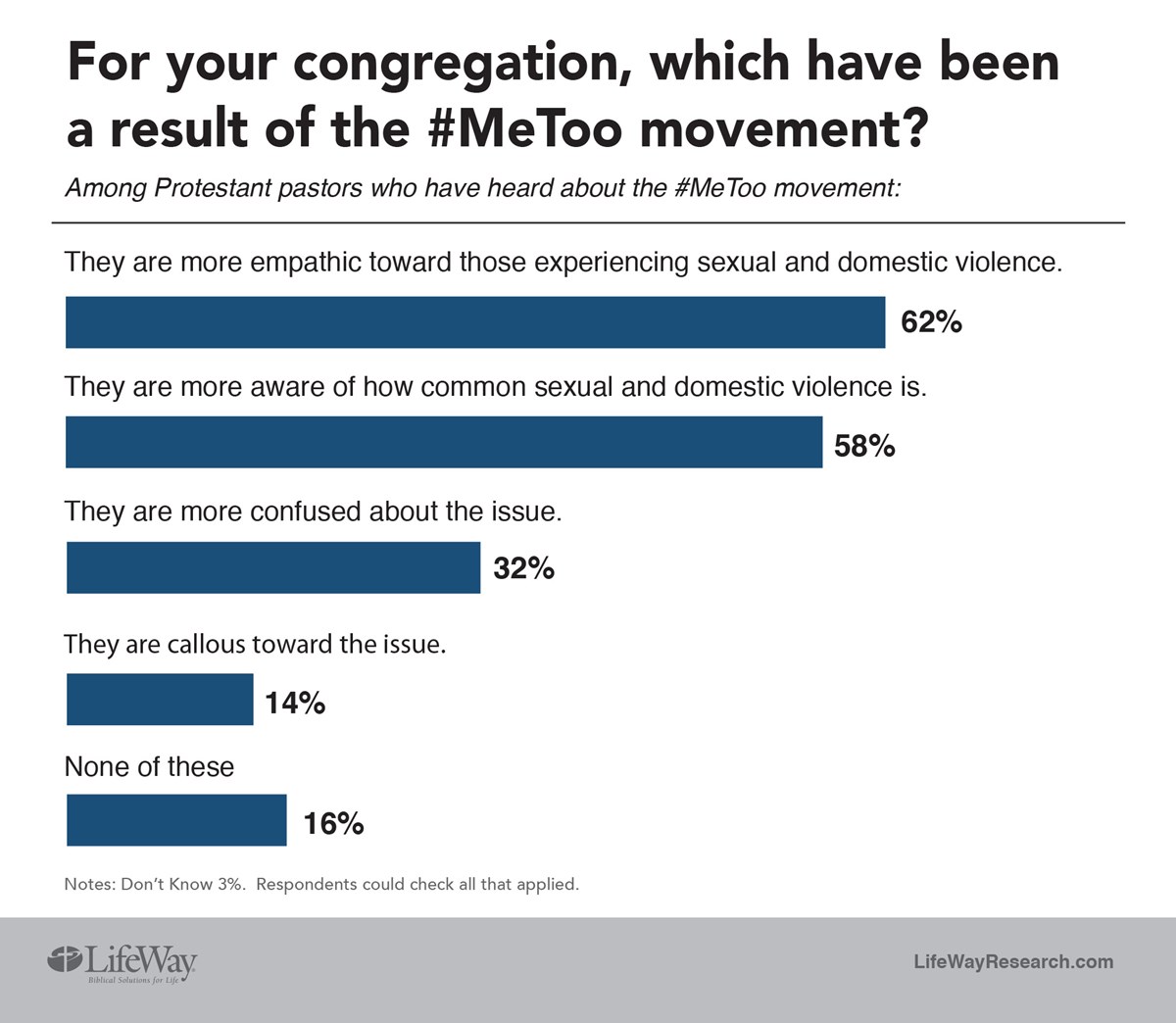 By contrast, only 34 percent of Protestant senior pastors spoke about domestic violence more than once a year in a similar study in 2014.

Only 1 in 5 (18%) say they address domestic or sexual violence because it is an issue in their congregation. Almost half (46%) speak about it because they have been trained in domestic violence issues.

LifeWay Research found that pastors often take action when they learn about cases of domestic and sexual violence.

Pastors believe victims need help from outside of their families when abuse occurs in the home. Eighty percent say in cases of domestic or sexual violence that occur in the home—including physical violence, child abuse, or marital rape—outside intervention is needed. Nine percent say such violence should be resolved primarily within the family. Eleven percent don’t know.

Sixty-four percent of pastors agree that sexual or domestic violence occurs in the lives of people in their congregation—including 24 percent who strongly agree. Thirty percent disagree—including 13 percent who strongly disagree. Sixty-two percent say their church has taken action against domestic or sexual abuse at least once a year.

Ninety-six percent of pastors say they have a responsibility to ask church members about possible abuse if they see signs of domestic or sexual violence. Three percent disagree.

When responding to a case of domestic or sexual violence, 81 percent of pastors say they have provided a referral to an agency that assists victims. Seventy percent have provided marriage or couple’s counseling. Forty-six percent provided counseling for the abuser. Forty percent did a safety risk assessment for the victim.

Despite their willingness to help, many pastors still feel ill-prepared according to the study.

Only about half (55%) of pastors say they are familiar or very familiar with domestic violence resources in their community. And half say they don’t have sufficient training to address sexual or domestic abuse.

And some of the ways they respond can cause more harm than good according to experts, said McConnell.

Domestic violence experts, for example, say providing safety for victims should come first. Yet, less than half of pastors have done an assessment. And many pastors provide couples counseling in response to violence, something experts say can put victims at risk, said McConnell.

“We know caring faith communities respond to need. But in responding to abuse and harassment, we have much work left to do,” said Rick Santos, president and CEO of IMA World Health. “Our next generation of faith leaders need to be prepared to preach about prevention from the pulpit, create a safe space within their churches and lend their voices to the movement for lasting change in our society.”

The phone survey of 1,000 Protestant pastors was conducted June 19-July 2, 2018. The study was sponsored by IMA World Health and Sojourners. The calling list was a stratified random sample, drawn from a list of all Protestant churches. Quotas were used for church size. Each interview was conducted with the senior pastor, minister or priest of the church called. Responses were weighted by region to more accurately reflect the population. The completed sample is 1,000 surveys. The sample provides 95 percent confidence that the sampling error does not exceed plus or minus 3.2 percent. Margins of error are higher in sub-groups.

Comparisons are made to a phone survey of 1,000 Protestant pastors conducted by LifeWay Research May 7-31, 2014 using the same methodology.

The #MeToo Movement Has Educated Pastors. And Left Them with More Questions.

The #MeToo Movement Has Educated Pastors. And Left ...