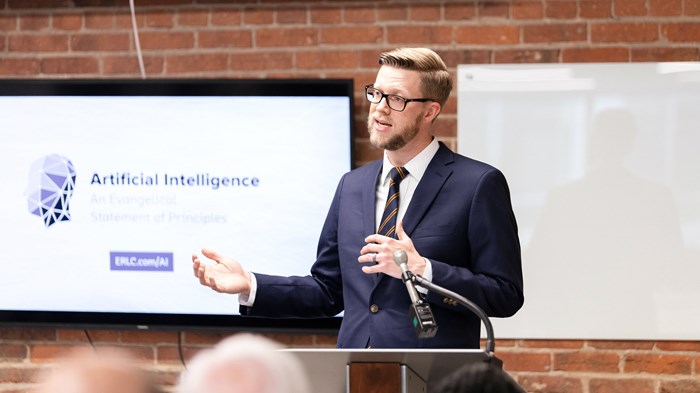 With a landmark statement on AI—the most prominent consideration of the issue among American evangelicals—these leaders are putting moral and ethical concerns at the forefront as the emergent technology grows behind the scenes.

“We recognize that AI will allow us to achieve unprecedented possibilities, while acknowledging the potential risks posed by AI if used without wisdom and care,” state the authors of the new Evangelical Statement of Principles on Artificial Intelligence, unveiled today in Washington, DC. “We desire to equip the church to proactively engage the field of AI, rather than responding to these issues after they have already affected our communities.”

Experts in faith and AI have applauded their proactive efforts to address this area, calling it “a pioneering move” for the church, as secular and government spheres have recently struggled to confront technology’s ethical issues.

SPEAKING OUT
Jason Thacker: Artificial Intelligence Favors the Powerful. But It Doesn’t Have To.

“We need a common starting point on which to evaluate the weighty ethical decisions before us about how this technology will be develop and used,” said Jason Thacker, ERLC’s creative director and the author of a forthcoming book on AI and human dignity.

The statement, composed by experts in business, public policy, tech, ethics, and biblical theology, consists of 12 articles, each offering biblical affirmations and denials about human nature and various implications for the future of artificial intelligence.

The document emphasizes God’s power as the author of life and humans’ special role as image-bearers. It mostly focuses on conceptual and theoretical frameworks for using AI but also explicitly decries the use of AI for sexual pleasure as well as “manipulative and coercive” data collection.

Rooting its discussion in the worth, dignity, moral agency, and creativity of all persons, it goes on to “deny that any part of creation, including any form of technology, should ever be used to usurp or subvert the dominion and stewardship which has been entrusted solely to humanity by God; nor should technology be assigned a level of human identity, worth, dignity, or moral agency.”

The statement testifies to the possibilities of innovation for human flourishing and the lessening of suffering but denies that the use of AI is “morally neutral.”

Article 3 relates to the relationship between humanity and artificial intelligence. It affirms “the use of AI to inform and aid human reasoning and moral decision-making,” and denies “that humans can or should cede our moral accountability or responsibilities to any form of AI that will ever be created. Only humanity will be judged by God on the basis of our actions and that of the tools we create. While technology can be created with a moral use in view, it is not a moral agent. Humans alone bear the responsibility for moral decision making.”

Other articles speak to AI’s implications in areas like medicine, sexuality, work, and war.

In the shadow of ongoing debates over privacy on social media, Article 8 on data and privacy is particularly prescient, affirming that privacy and personal property are rights not to be violated by states or corporations.

The article goes on to deny the “manipulative and coercive” use of data. “We further deny that consent, even informed consent, although requisite, is the only necessary ethical standard for the collection, manipulation, or exploitation of personal data—individually or in the aggregate.”

ERLC president Russell Moore has been discussing the implications of emergent technology throughout his ministry career; more than a decade ago, as a professor of Christian ethics, he challenged students to think through potential to baptize robots or cyborgs.

As that far-off future has grown even closer, Moore said he has lost sleep over AI.

The statement’s release comes on the heels of recent national and international declarations on the technology.

In February, President Trump issued an executive order on the matter stating, “Continued American leadership in AI is of paramount importance to maintaining the economic and national security of the United States and to shaping the global evolution of AI in a manner consistent with our Nation’s values, policies, and priorities.”

Last week, Google slashed the AI ethics panel it had announced only a week earlier after outcry over its constituents. It also elected to cancel its contracts with the Department of Defense after employees sounded the alarm on ethically thorny military AI projects.

Earlier this week, the European Commission published their own ethical guidelines for “trustworthy artificial intelligence.”

“The ethical dimension of AI is not a luxury feature or an add-on,” said Andrus Ansip, EU vice-president for the digital single market, in a Monday press release. “It is only with trust that our society can fully benefit from technologies.”

The evangelical statement marks a strong, timely insertion into the global AI discussion.

“The statement stakes an early claim for a seat at the AI ethics table for thoughtful Christians,” said David Brenner, an attorney and founding member of the group AI and Faith. He calls the ERLC’s action “a pioneering move.”

“The statement demonstrates how religious belief brings a systemic and holistically grounded approach to the ethics discussion, rather than the ‘one-off’ considerations of what is right and fair that we have seen in the recent lurchings of Facebook and Google.”

Tripp Parker, a machine learning leader at Amazon who reviewed the statement before it was published, said he is glad to see the church stepping into this conversation earlier than it might have historically.

“The church has largely ignored some of these big technological movements or been late to the game,” he said. “So I think this is a positive step to at least be talking about that, about what uniquely Christian we bring to this conversation.”

He praises the document for its framework and for “staying in its lane,” not overstating its case or trying to be a technical paper.

But he and Brenner don’t believe the statement is perfect.

“The statement is strong in theology and theory but less strong on the practical issues posed by cutting edge technology,” said Brenner.

Parker said the statement is somewhat “anemic” in fleshing out the effect of sin on the work of developing AI. He’d also like to see a more positive view of what AI can do for society. “What is the positive vision we could make about this; what should we be pointing toward?”

Michael Paulus, director and associate professor of information studies at Seattle Pacific University, said, “One wishes it were more diverse and inclusive, theologically as well as technologically, which would allow for broader discussions about a range of issues related to human nature, the promise of technology, and our hope for the future.”

More will need to be said about how various technologies alter human understanding of ourselves and our place in the cosmos, he said.

Even so, he believes the statement provides a constructive first step for anyone anxious about AI.

As countries, corporations, and citizens are continually encouraged to embrace and accept new technologies, the Luddite temptation and its counter, the perception that all progress is forward progress, will grow.

The statement’s concluding article on the future of AI announces that even as some technology outpaces human abilities, “God alone has the power to create life, and no future advancements in AI will usurp Him as the Creator of life.”

“We deny that AI will make us more or less human, or that AI will ever obtain a coequal level of worth, dignity, or value to image-bearers,” the authors state.

“Future advancements in AI will not ultimately fulfill our longings for a perfect world. While we are not able to comprehend or know the future, we do not fear what is to come because we know that God is omniscient and that nothing we create will be able to thwart His redemptive plan for creation or to supplant humanity as His image-bearers.”