Doubt Your Faith at an Evangelical College? That’s Part of the Process

Research shows that students at CCCU schools are more likely to face a religious crisis than their secular counterparts.
Daniel Silliman|August 30, 2019 08:00 AM 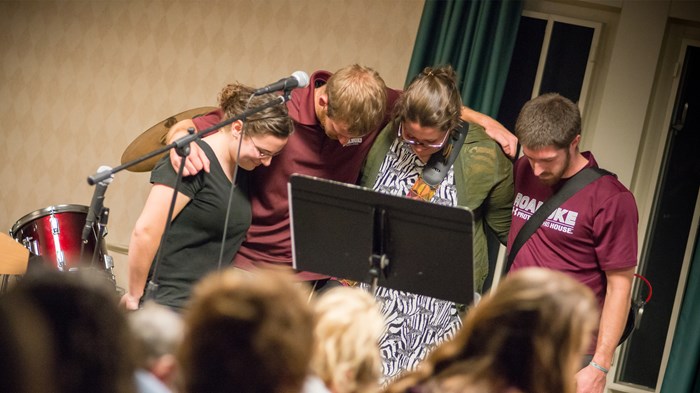 It was quiet in the morning chapel when a Bethel University student took a pen and paper and put words to the fear: “Does God really love me?”

Then another student at the small evangelical school in Mishawaka, Indiana, took another piece of paper and wrote, “Am I good enough?”

Three students wrote, “Can a loving God send unbelievers to hell?” Six asked, “Why does God answer some prayers and not others?” Twelve: “Is Christianity the only way?” Twenty: “Is God really real?”

Shawn Holtgren, Bethel’s vice president for student development, was not surprised at the questions and doubts, which come up for students every year.

“In youth group they were surrounded by likeminded kids, and then they come to a place like Bethel, and they enter into a more searching phase,” Holtgren told CT. “It’s a process of beginning to question.”

A new two-part study published in Christian Higher Educationshows how common it is for students at evangelical colleges and universities to struggle with their faith. In fact, they are more likely to feel unsettled about spiritual matters, unsure of their beliefs, disillusioned with their religious upbringing, distant from God, or angry with God than their peers at secular schools as well as those at mainline Protestant and Catholic institutions.

Jennifer Carter, an assistant professor of leadership at Southeastern University in Lakeland, Florida, analyzed surveys of more than 14,000 students at 136 colleges and universities, looking for patterns and predictors of religious struggle.

But for students at schools affiliated with the Council for Christian Colleges and Universities (CCCU), it’s the other way around. They tend to feel secure in their faith at the start of college but three years later, they’re in crisis.

This seems backwards. People go to evangelical colleges and universities—at least in part—because they want a school that nurtures their faith. When Carter looked at the results of her study, though, she said it helped her understand her own undergraduate experience at Valley Forge Christian College (now University of Valley Forge), in Pennsylvania.

“I was raised in a Christian family, went to a Christian college, and had a lot of questions—and felt a lot of guilt and shame about that,” she said. “I thought when I left college I’d have this really solidified faith, and I left with questions and doubt. I didn’t know that was really normal.”

In graduate school at Azusa Pacific University in California, Carter found that her studies in social science gave her a new perspective. “Crisis is a precursor to growth,” she said. “We can see that in life generally, but in faith especially.”

“It’s almost that we have to deconstruct their faith, but in a nice way,” said Wanda Walborn, associate professor of spiritual formation at Nyack. “We have to carefully and lovingly get you back to Jesus, get you back to the grace of God, outside of performance.”

This isn’t a new phenomenon, either. Adam Laats, a historian of higher education at the State University of New York at Binghamton and the author of Fundamentalist U: Keeping the Faith in Higher Education, said provoking spiritual struggle is part of the religious tradition. He looked at oral histories of evangelical missionaries, recalling their Bible college education in the 1920s, ‘30s and ‘40s, and found they almost always talked about their college experience as a time of spiritual struggle.

“It was a standard trope,” Laats said. “It’s that sawdust trail tradition. They experienced spiritual tumult, though not necessarily disaffection. They remembered having that sense of tumult and they said, later, ‘I think that was what the school intended, to prepare us for Christian work.’”

Contemporary leaders at Christian colleges and universities don’t really have to push students to spiritual crisis. They expect students to come to this point in their faith and prepare to help them through it.

“We know the cycle that students experience,” said Laurel Bunker, the associate vice president of Christian formation at Bethel University in St. Paul, Minnesota (not connected to the school of the same name in Indiana). “We don’t fear the struggle. What we’re more concerned with is when students struggle in silence.”

Students at Dordt University, in Sioux Center, Iowa, are required to live on campus all four years, in part so they have a community around them when they have questions, doubts, and difficulties.

“Think about the model Jesus had with his own disciples,” said Aaron Baart, the dean of chapel. “They needed three years to stumble alongside him and even doubt their faith. That was important. They needed to do that.”

Baart told CT the connections students develop a have long-term impact on their faith. A Dordt survey found that 96 percent of alumni say they attend church weekly.

Colleges across evangelical denominations set up campus life and curricula to address the spiritual questions they know will come up—something that doesn’t happen as directly or intentionally at secular schools.

“Developmentally it’s a time of struggle,” said Rebecca Stoltzfus, president of Goshen College, an Anabaptist school in Indiana (not affiliated with the CCCU). “It’s part of the design of college and part of the design of being a young adult. Struggle is built in. What we try to provide are professional staff and faculty who are rooted in their own faith and able to journey alongside, in ways that honor the journey of the student.”

The Valley of the Shadow of Doubt

Evangelical institutions offer course work, specifically aimed at doubt, big religious questions, and existential life issues. They will also hold chapel services and small groups, some of which are required, as well as mentorship or discipleship programs.

At Bethel in Indiana, seven out of 10 students are in one-on-one mentoring relationships or part of a small group. Many of those small groups are designed to address the doubts and the barriers to faith that students wrote down in chapel, according to Holtgren.

“They’ve been told in church or Christian culture, ‘Don’t doubt. Just believe.’ And that phrase was not adequate,” Holtgren said. “We want to be examples of Christians and hold up Christians who have walked through the valley of the shadow of doubt. Let me walk with them through that.”

As students are returning to evangelical colleges and universities across the country, this year, this is the kind of prayer the faculty and staff are praying for them. They frequently feel a great urgency—not to save their students from spiritual crisis, but to meet them in it.

“If we don’t give them the answers, we leave them out to sea without a paddle. Without a life preserver. Without water to drink. They’re dog paddling in this sea and they get tired,” said Bunker from Bethel in Minnesota. “Just hoping they have an experience of the Holy Spirit and float into a good church? That’s not enough.”

Carter’s next study will look at seniors who have resolved their religious struggle, and ask them what the CCCU schools did that made a difference.

Doubt Your Faith at an Evangelical College? That’s Part of the Process

Doubt Your Faith at an Evangelical College? That’s ...