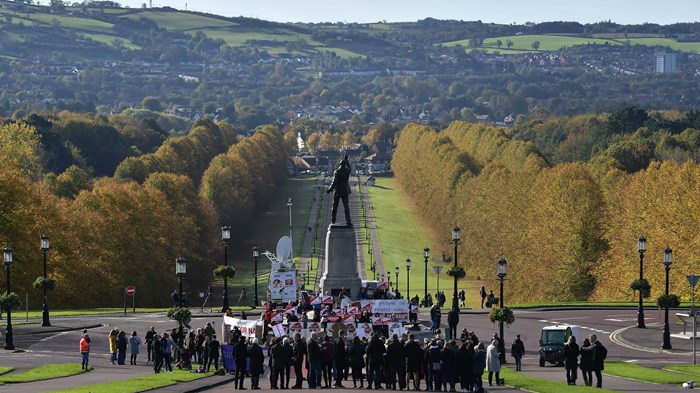 Abortion and gay marriage have become legal in Northern Ireland for the first time, rallying Christians against dramatic policy changes put in place without their consent.

Northern Ireland’s longstanding opposition to abortion has made it a pro-life holdout in the United Kingdom, with a local ban against the procedure in all cases except if a mother’s health is in danger. Yet, these abortion restrictions were overturned after lawmakers failed to assemble on Monday to block laws passed on its behalf by the United Kingdom.

The UK directive went into effect midnight last night, meaning women can no longer be prosecuted for obtaining an abortion. Hospitals will not provide abortions in Northern Ireland until April 2020.

“The changes will mean Northern Ireland moves from having the most protective environment for the unborn to having some of the most liberal abortion laws in Europe,” said Peter Lynas, Northern Ireland director of the Evangelical Alliance of the United Kingdom, which co-founded the pro-life, pro-woman campaign Both Lives Matter to oppose reforms.

“They were imposed without the consent of the people of Northern Ireland and will fundamentally shift our culture. There has been a significant mobilization, particularly on the issue of abortion. The issues have also united churches and seen evangelical and Catholics working closely together.”

Northern Ireland, whose Protestant population is now roughly equal to its Catholic population, has resisted efforts to legalize abortion for decades. Research by Both Lives Matter indicates that 100,000 lives have been spared from abortion in the region since the rest of Great Britain adopted the 1967 Abortion Act allowing the procedure.

The UK government declared in July that Northern Ireland’s laws on abortion and gay marriage (the country previously recognized same-sex civil partnerships only) were out of compliance with human rights regulations, and would have to change if the region’s own government didn’t intervene, The New York Times reported.

The Evangelical Alliance lobbied for the local assembly to reconvene, after it had not met for more than 1,000 days. Not enough members turned up on Monday to prevent the UK laws from being enacted.

Arlene Foster, who leads the Protestant, conservative Democratic Unionist Party, said in August that opposition to abortion has united Protestants and Catholics as “one issue where alliances have developed across the main traditions in the community.”

Yet, some polls showed that public opinion was turning. The country of Ireland (not part of the UK) voted last year to repeal its abortion ban by a landslide, allowing women to procure abortions at up to 12 weeks of pregnancy. Around the same time, a majority of people in Northern Ireland—65 percent—said abortion should no longer be a crime.

Musicians Keith and Kristyn Getty (known for hymns like “In Christ Alone”) referred to the legalization of abortion as “the greatest evil to ever reach Northern Ireland.”

“Please pray for the leaders of Northern Ireland,” they asked fans in a post on Monday. It was their first time addressing politics in their home country. “There are many working hard for life. The ugliness of it all is hard to describe and a fair place to speak nearly non-existent. Please pray for the local church there. For compassion, innovation, courage and boldness in conviction. Please pray for those groups tirelessly advocating for the protection of mothers and their babies.”

Christians opposed to the abortion change have adopted the hashtag #bothlivesmatter, and 30,000-plus signed an online petition that critiqued the policy change for going against the will of the people. Protestors around the Northern Ireland parliament in Belfast similarly challenged the UK decision, with banners reading, “Abortion? Not in Our Name.”

“This is not progress; it is a retrograde step. Abortion will now be legal in Northern Ireland on the grounds of disability and gender, there will be no effective regulation until at least March 2020 and even that is not guaranteed,” Nola Leach, chief executive of Christian Action Research Education (CARE), told Christian Today in the UK (no affiliation). “The people of Northern Ireland deserve more than this. We continue to believe that both lives matter and our work to be a voice for the voiceless and to argue for a better way that upholds the dignity of both mothers and babies.”

Pro-choice activists celebrated the change. Previously, women who opted to abort—including in cases of rape, domestic violence, incest, and diagnoses that indicate the baby will not survive after birth—had to leave the country to do so. Some bought abortion pills illegally online and risked criminal charges if caught. The Times noted that procuring an abortion in Northern Ireland could bring a sentence of life in prison.

In the United Kingdom overall, around 80 percent believe abortion should be legal, compared to around 60 percent of adults in the US, according to a 2018 Pew Research report.

While churches in Northern Ireland are most mobilized around defending the unborn, they have also opposed the same-sex marriage change, which will go into effect early next year, with some marriages recognized as early as Valentine’s Day 2020.

Lynas said they acknowledge that there is broader social support for that move, even if evangelicals themselves maintain a view of marriage as between one man and woman. Over the past 18 years, 17 other jurisdictions in Europe have legalized gay marriage.

“We are working to ensure freedom of religion and conscience are maintained so that no one is compelled to act against their beliefs,” he said in a statement to CT. “There is a risk that churches and religious organizations might be compelled to participate in same sex marriages or allow their buildings to be used for that purpose. There is a concern that schools will be obliged to teach about same sex marriage and abortion in a more proactive way.”