After His Son’s Death, TobyMac Tells Fans: ‘We Follow God Because We Love Him’ 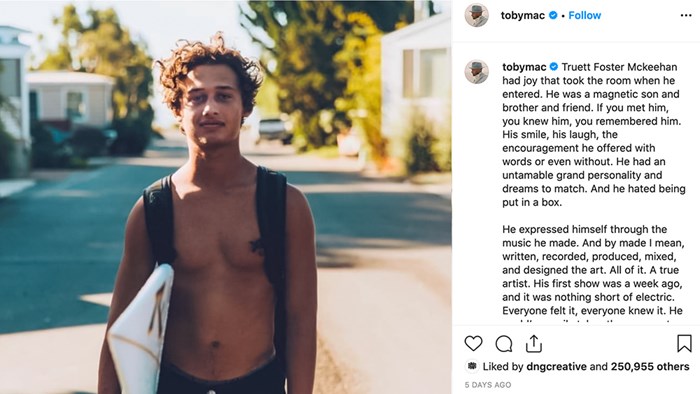 The cause of death is not yet known. The Nashville Fire Department responded to a report of cardiac arrest and the death is under investigation by the Nashville Metro Police, according to reporting from the Tennessean.

TobyMac, whose real name is Kevin McKeehan, posted about his son’s death on Instagram Thursday.

“Truett Foster Mckeehan had joy that took the room when he entered. He was a magnetic son and brother and friend,” he wrote. “He was by no means a cookie cutter Christian but give me a believer who fights to keep believing. Give me a broken man who recognizes his need for a Savior every time. That’s who Truett was and how he should be remembered.”

McKeehan was an aspiring musician who collaborated with his father multiple times over the years, rapping on “TruDog: The Return,” in 2004, when he was only 6; “Hype Man (TruDog ’07);” “LoudNClear (TruDog 10)”; and most recently on “Backseat Driver” in 2015.

McKeehan was also an artist in his own right. As an independent rapper, he performed under the names Shilo and Moxie. He uploaded his music to Youtube and Soundcloud and developed a small following.

One of his most-viewed Youtube videos was “Villa Pl. Freestyle,” which showed McKeehan rapping while riding a skateboard downhill. His latest single was a breakup song, called “Eyes,” released in June: “So she left then she said / baby you know why / You get lost in your head I can’t read your eyes.”

McKeehan performed “Eyes” during a show at the Factory in Franklin, a week before his death. It was his first live show.

TobyMac, who has charted 20 solo singles on Billboard’s Christian songs chart, texted his son after the performance. “I wanted to tell you how proud I was of you last night,” he wrote. “Your show was amazing and I think you got the ‘it’ factor which is very important but unexplainable. Your joy is infectious and you invite people into it.”

McKeehan replied: “you have always believed in me, make me feel like a superhero.”

TobyMac shared the final exchange on his Instagram page after McKeehan died. He added: “My wife and I would want the world to knows this … We don’t follow God because we have some sort of under the table deal with Him, like we’ll follow you if you bless us. We follow God because we love Him.” TobyMac added that God is “the God of the hills and the valleys.”

The artist spoke about his changing relationship with his son last year, when McKeehan moved to Los Angeles and went through some difficult experiences.

“Watching people you love go through hard things is tough, and I want people to know that they are not alone,” TobyMac toldDigital Journal.

After His Son’s Death, TobyMac Tells Fans: ‘We Follow God Because We Love Him’

After His Son’s Death, TobyMac Tells Fans: ‘We ...