Pushed by pandemic, schools are reinventing a core part of campus life to work on the internet.
Liam Adams|April 2, 2020 06:40 AM 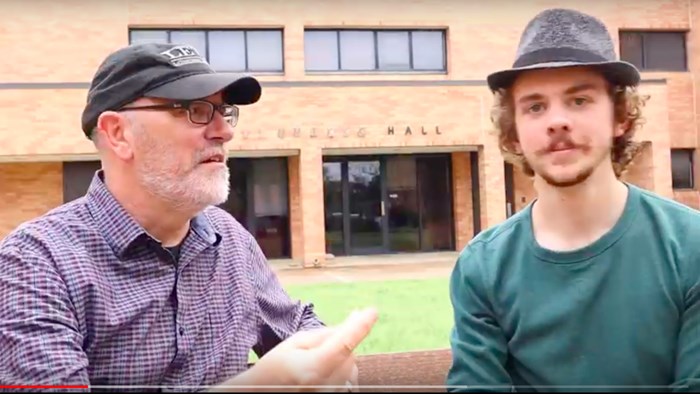 On a bench in the foreground, LeTourneau University campus pastor Pat Mays welcomes viewers and announces an update on a recent mission trip to Mexico. He shouts and snaps his fingers. There’s a quick cut, some editing magic, and freshman Wil Manchester jumps from the distant background to appear on the bench next to Mays, wearing a fedora and ready to share his experience on the spring break trip.

It could be a TikTok video, but this is LeTourneau’s “chapel” now.

The Texas school’s campus is closed, like most institutions of higher education across the country, and everything has moved online for fear of spreading COVID-19. For Christian colleges and universities, this includes chapel.

The daily or weekly service is often critical to the identity of a Christian college or university—it’s where the whole community comes together in one place and interacts. Chapel services are seen as a key part of students’ spiritual formation, and attendance is often required for credit necessary to graduate. And it’s not uncommon for a discussion—or controversy—that starts with a chapel speaker to define the life of a campus for a semester and sometimes the experience of a whole class of students. Chapel sets Christian higher education apart.

Now schools are trying to figure out how to translate that core part of their community life onto the internet.

“This feels like a brand-new school year, in a way, where we’re inventing new ways to connect with students and deliver content,” said university pastor Jamie Noling-Auth at George Fox University in Oregon.

Going online in a matter of weeks has been a challenge to a lot of Christian schools, where there hasn’t been a lot of emphasis on being tech savvy in the past. Angie Richey, president of Life Pacific University, in California, said it might have taken years to launch “online chapel” if there weren’t an urgent need to do it right now.

“Innovation thrives in crisis,” Richey said. “This is a way to keep some type of consistency in the midst of separation and isolation. It’s kept us together.”

Some schools are just trying to keep it simple while ministering to their college community in this time of crisis and keeping everyone connected. At Harding University, in Arkansas, president Bruce McLarty stars in a daily, five-minute YouTube video he films in his home office on his iPhone.

“This is about as low tech as it gets,” McLarty says in the first “virtual chapel” video.

Except, of course, it’s not as low tech as gathering students into a physical building. Compared to what Christian colleges have been doing, this is the future.

“It’s been a big learning curve,” said Laurel Bunker, associate vice president of Christian formation and church relations at Bethel University in Minnesota. “You can’t fall flat in front of the camera if you’re going to engage with the audience. You can’t just sit there and say, ‘Hi, let’s open up the word of God.’”

Bethel’s online chapel is a daily video and a podcast with interviews of faculty and staff, as well as a short weekly sermon. Bunker said she had to learn how to make eye contact with the camera. The audience should “feel as though you’re really looking at them and talking to them personally,” she said.

There were also technical difficulties, at first. Bunker has an old Dell computer that needed to be updated before she could record quality sound and video.

Many Christian colleges require chapel attendance as part of their core curriculum. That can be difficult to measure online. At some schools, like Oklahoma Baptist University, Life Pacific, and Palm Beach Atlantic in Florida, students are receiving chapel credit through quizzes and questionnaires after they’ve watched the videos. Other schools, including Harding, George Fox, and Covenant College in Georgia, have decided to waive the attendance requirement this year, giving students credit whether they log on and watch the videos or not.

“For a lot of us campus ministers, we’re just rolling with it,” Noling-Auth said. “It’s like, whatever we need to shift, we’re going to shift.”

Noling-Auth and her team are uploading sermons to Spotify multiple times a week. They’re also making an effort to have a presence on Instagram.

“We don’t understand the scale of how something like the coronavirus is going to be impacting our students and our families,” Noling-Auth said. But they want to do whatever they can so that that students “can continue to receive pastoral care, spiritual nurture, and biblical encouragement.”

While moving the services online, some chaplains feel extra pressure to be creative and entertaining. They’re trying to find ways to grab students’ attention. Charleston Southern University is producing daily, one-minute devotional videos featuring administrators, faculty, students and even board members. The first featured Clark Carter, vice president of student life, singing along to the Mister Rogers’ Neighborhood theme song, “Won’t You Be My Neighbor?” while he rubbed his hands with sanitizer, before he turns to the video and says, “Oh, hello, neighbor.”

At Life Pacific, the university is looking at using newer forms of social media, including TikTok and Snapchat, to engage students.

At LeTourneau, Mays is posting creative lessons to YouTube, making use of time lapses and other editing tricks when he can. His most recent video starts with a soliloquy about trees and wind and features students helping with yard work at his house.

“I don’t like to watch talking-head videos. They’re always, honestly, a little boring,” said Mays, who is also part of an improv troupe. “Anytime you can mix serious stuff with chances to laugh, or at least smile, to me, those are very rich moments.”

Richey said that kind of creative engagement will only become more important going forward. She wouldn’t be surprised if schools keep doing “virtual chapels” and looking for new forms of social media engagement, even when students are allowed to return to campus.

“There is so much noise out there,” Richey said. “So how can we be unique, how can we be creative without compromising authenticity to who we are?”