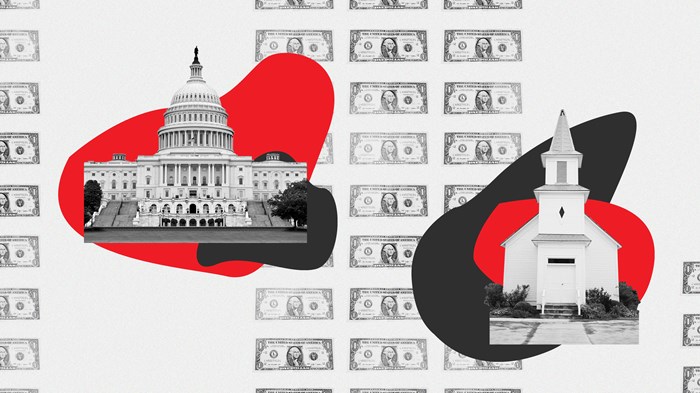 Churches and ministries in the US have never before been offered the kind of financial relief now available through the coronavirus stimulus package.

For some—like the religious liberty advocates who lobbied to clarify eligibility for faith-based employers—their inclusion in the federal government’s $350 billion small-business loan effort comes as a major answer to prayer.

But for many Christian leaders, the unprecedented setup still raises questions. With the country’s long tradition of church-state separation, is it a good idea for congregations to accept the funding that comes as part of a government stimulus? And if they decide to, how does it work?

Special guidance released Friday stated that religious employers including churches would be able to participate in the Paycheck Protection Program (PPP). It allows small businesses that have suffered financially due to the COVID-19 outbreak to apply for loans, which can be forgiven if used to cover payroll and mortgage costs.

This week, Russell Moore, president of the Ethics and Religious Liberty Commission (ERLC), assured Southern Baptists that the program “is not any way a ‘bailout’ of churches” but part of a broader safety net to stave off widespread unemployment. He wrote that he did not see the financial relief as a dangerous entanglement, saying that funding through a forgiven loan in these circumstances would not open up a church to government oversight.

Evangelical Council for Financial Accountability (ECFA) president emeritus Dan Busby anticipates that tens of thousands of churches at minimum will apply for the PPP loans.

Over the past week, financial resources ministries have been rushing to answer FAQs, host webinars, and advise leaders on whether or how to pursue the government options, which include not only the payroll loan forgiveness but also the Economic Injury Disaster Loan (EIDL), a low-interest loan of up to $10,000 for particular costs due to the coronavirus shutdowns.

“Ah yes, seminary taught me well on how to fill out loan forgiveness forms from the Small Business Administration,” one small-town Virginia pastor remarked sarcastically on Instagram on Monday.

Fellow Christianity Today publication Church Law & Tax held a webinar for a record-setting 12,000 registrants last Thursday, while organizations like the accounting firm CapinCrouse, Guidestone Financial, the ERLC, and the ECFA have shared similar resources to help answer questions about the stimulus loans and how to apply.

After some lenders had initially turned churches away early last week, the biggest questions have been whether churches really qualify in the first place—they do—and how to submit their loan applications, which can be used request as much as two-and-half-times their typical monthly payroll.

Busby called the speed at which the government passed the loan package through the CARES Act and issued the guidance addressing religious employers “miraculous,” joining evangelicals leaders in applauding the efforts by legislators such as Senators Josh Hawley and Tom Cotton, who prioritized explicitly including churches and religious nonprofits.

Crown Financial Ministries, whose workload has “doubled in intensity” during the past couple of weeks, has also offered guidance on PPP, but with a far more apprehensive approach. Crown CEO Chuck Bentley explained that though the ministry qualifies for around a quarter-million-dollar loan, it won’t be applying. In addition to avoiding taking on debt, “our bottom line is that we think we should not accept any taxpayer funds for our ministry, and that we should trust the Lord to provide,” he wrote.

Bentley told CT that though he doesn’t believe it is sinful for others to take the loans, he urges leaders to be prayerful and thoughtful before rushing to accept the assistance.

“Is it really manna from heaven? It’s manna from Caesar, that’s for sure,” he said. “What’s it going to look like in terms of the optics in the long term, that this is where the church went for a rescue?”

More than half of Protestant churches have already noticed a significant drop in giving, and there’s no end to the shutdowns in sight, so leaders may be eager to take whatever relief they can. LifeWay Research found that, of the pastors who saw tithing decrease when their churches stopped meeting in person, most reported declines of 25 percent or more. With unemployment skyrocketing, they don’t know how much worse things will get for the financial health of their congregations, and because the loans will be distributed on a first-come, first-served basis, there’s incentive to apply early.

Since there’s no guarantee that more money will be appropriated if the initial funding runs out, “I would suggest to anyone who’s really seriously interested, now’s the time to apply,” said Busby. “Going into an application with an organization’s eyes wide open is what seems prudent to me. The organization needs to realize that they may be criticized for accepting government money—I’ve already seen it on the internet—and decide up front whether it’s the thing to do.”

‘The church should be first to help’

Bentley hopes churches can take benefit from a different stimulus incentive—the checks being sent to out to Americans as early as this week or next.

“I would ask the families to consider, if they don’t need it, possibly that could be something that they give from,” he said. “There are a lot of families that are ready for this crisis, and they could give sacrificially and generously.”

He’s also echoed the advice being given to pastors who are suddenly ministering from across screens: Be sure to remind congregants of online giving options and emphasize the importance of regular tithing during this time. And perhaps be willing to take voluntary, temporary salary cuts—a measure his team implemented during the recession more than a decade ago to avoid layoffs.

Beyond the congregational level, fundraisers are rallying believers to offer their support across the body of Christ. The Churches Helping Churches Initiative, led by the And Campaign, aims to raise half a million dollars in April for cash-strapped churches that need immediate assistance.

“Although the federal government has moved to provide some assistance to Americans and nonprofits, we believe that the church should be the first to help their brothers and sisters in need,” said Justin Giboney, president of the And Campaign. “Many of our churches in low-income, urban areas have been hit hard because of the virus’s spread in densely populated areas and the loss of jobs for hourly workers, who cannot do their work remotely.”

In just the first few days, it raised $160,000 with the help of partners like former New England Patriots tight end Benjamin Watson. Churches can apply for $3,000 grants through the site ChurchRelief.org, and the initiative hopes to provide them in the coming weeks, rather than the months expected to be needed to get the small business loans.

“By then it will be too late for many churches and missed the moment of greatest need,” the initiative stated. “Churches’ costs are increasing right now as they provide critical assistance for their communities.”

Thrivent Financial recently completed an online fundraising campaign, raising $3.5 million in donations plus a $1.5 million match. The money will go to 1,100 churches and organizations involved in relief efforts, like food banks and shelters.

And individual congregants are stepping up. Busby shared that an ECFA member congregation suffered a 50 percent drop in giving its first week, and one of its attendees cut a check to make up the difference.

Good to have options

For churches and ministries experiencing financial shortfalls at this time, the loans represent a “significant opportunity,” said CPA and tax attorney Ted Batson, writing for Church Law & Tax. But the program is new for everyone—not just recipient churches but also the government and the banks.

“This is a complex loan program,” he wrote. “Expect the [Small Business Administration] and lenders to be flying blind for several weeks as the application process is designed, forms are created, and regulations and other guidance are created.”

From the outside, one of the biggest critiques around churches’ and ministries’ inclusion in the small-business loan program is their tax-exempt status. However, religious liberty advocates argue that if other 501(c)(3) organizations can apply for coronavirus relief, an employer’s faith convictions shouldn’t keep a group from being eligible.

And while nonprofits don’t pay income taxes, that doesn’t mean they carry no tax burden. Churches and faith-based nonprofits pay payroll taxes for non-ministerial positions, and even pastors pay income taxes, though some of their pay is exempt. Under the stimulus package put into law less than two weeks ago, they are able to take advantage of individual stimulus checks and small-business loans—same as nonreligious employers.

As the economic downtown caused by the coronavirus pandemic continues, even Christians who recognize that others may be concerned about government funding are relieved to be included and have this opportunity.

“Churches and pastors have options available to them depending on their own situations and convictions,” said O. S. Hawkins, president of the Southern Baptist Convention’s financial services agency Guidestone Financial. “While we would never tell a pastor what he must do, it is good that the options are available for pastors and churches who may wish to avail themselves of the options available through this legislation.”

As with any decision in a time of crisis, leaders will be seeking direction from God and trusted counsel on what moves to make—cost-cutting, seeking relief, relying on cash reserves—when they can’t predict their financial future.