Whether COVID-19 or ISIS, believers from Iraq, Syria, and Egypt know “neither plague nor persecution can snuff out the church of Christ.”
Jayson Casper|April 3, 2020 10:00 AM 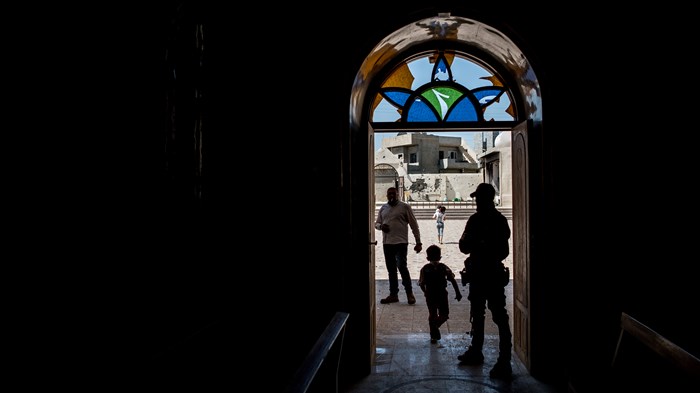 Image: Carl Court / Staff / Getty Images
Iraqi Christians gather for the first Easter service in Qaraqosh after it was liberated from ISIS in 2016.

Christians around the world are about to lose their usual Easter celebration—the highlight of most congregations’ annual life together.

Yes, there will be a livestream. Their pastor will likely call them. They may even chat on Zoom with friends and family.

But it will be different. The community of believers has been sundered by the new coronavirus. And threatened with it is Christ’s body, his bride, his temple for his presence in the world.

If there is any consolation, it is that this is not the first time.

“There are forces of nature—and forces of man—that challenge our ability to experience the presence of Christ,” said Gregory Mansour, the Maronite bishop of Brooklyn.

“[COVID-19] is different from persecution. But it is the same.”

A born-again Catholic led into personal relationship with Christ by the Navigators, Mansour later reconnected with his ancient Lebanon-based church. His clerical colleagues there received thousands of ISIS-fleeing Christians from Syria and Iraq.

“There was a deliberate desire to obliterate churches, hymnals, prayers, and people,” he said. “The only thing we had left was a spiritual communion.”

Though his own diocese is far removed from those events, it remains in the epicenter of America’s COVID-19 outbreak. One female doctor in his church is serving on the front lines, reminding Mansour of the plague of St. Cyprian (249–262 AD): that when all others ran away, Christians ran in to help the suffering.

Trying to find solace for his people in light of losing Easter, Mansour turned for inspiration to St. John-Marie Vianney, the patron saint of parish priests.

Vianney grew up during France’s anti-clerical Reign of Terror (1793–1794), when priests risked their lives after the French Revolution to visit the frightened faithful and serve Communion in private homes.

“When we cannot go to the church, let us turn towards the tabernacle,” Vianney later wrote. “No wall can shut us out from the good God.”

Even if the walls are covered with Islamist slogans.

In 2014, a coalition of al-Qaeda–linked rebel fighters overran the mostly Armenian city of Kessab in northwest Syria. Holy Trinity Evangelical Church was among those ransacked, as militant fighters destroyed its crosses. Many believers fled in their pajamas.

“In the midst of these circumstances, they kept their eyes upward,” said John, a US-naturalized Syrian, who requested his last name be withheld as he continues to travel in the region.

“Our identity is in Christ, and not about our gatherings.”

About half of those churches are in Syria and Iraq, and they lost 60 percent of their original membership during the war. The loneliness for those remaining was terrible, said John, as friends and family emigrated elsewhere—likely to never return.

“It felt like imprisonment, trapped, and not knowing if we would live to the next day,” he said, describing services held despite missiles raining overhead.

“But it was beautiful, because we stuck together and networked for survival. It was not about our personal needs but the hope we had in Christ and in each other.”

The Kessab fellowship found refuge among the Orthodox and evangelical churches in nearby Latakia and was able to go back home a year later. And since the return of relative stability, John says churches in his network have seen their attendance boom.

Their hope was contagious.

“There was something different about the Christians; they were not afraid,” he said. “The church had a God of relationship, and a sense of peace.”

For the Assyrian Church of the East, this peace came from two directions. Like the Armenians, its Iraqi members found cross-denominational spiritual shelter in Syria, Jordan, and Lebanon.

It was not completely natural, said Mar Awa Royel, bishop of California. The church has no formal communion with any other Christian body.

Tracing its heritage to the preaching of the apostle Thomas, the Assyrian Church of the East spread the faith to the borders of China. But by only accepting the first two Christian councils—Nicaea and Constantinople—and not later ones, the disputed label of “Nestorian” keeps them from full fellowship with the Eastern Orthodox and non-Chalcedonian Oriental Orthodox churches, while the rejection of papal primacy separates them from Rome.

“It was an ecumenism of displacement,” Royel said. “Official dialogues don’t always go well. But refugees force church leaders to put aside their age-old differences and come together.”

Building off of agreements for “limited communion in cases of pastoral necessity,” established after Iraqi displacement following the first Gulf War, Roman Catholic, Greek Catholic, and Syrian Orthodox priests all agreed to serve the Eucharist to the Assyrian faithful. They also loaned their altars to visiting Assyrian mission priests.

But when church leaders were unable to be physically present with their flock, they stayed electronically connected. Even refugees have a smartphone, Royel said.

“We encouraged them to follow the daily prayers and Scripture readings, to be spiritually united to the liturgy,” he said.

“It was the constant keeping in touch that kept them in communion with the church.”

Even so, as Christians around the world enter Holy Week, the COVID-19 outbreak will cause a “great sense of deprivation,” said Angaelos, the Coptic Orthodox archbishop of London.

Ruined holidays are not unusual for the Christians of Egypt. Ten years ago in Nag Hammadi, a gunman killed eight Copts as they exited Christmas mass. A year later, a car bomb killed 21 Copts on New Year’s Eve, in Alexandria. And three years ago on Palm Sunday, suicide bombers killed 47 Copts at two churches in Alexandria and Tanta.

“We are accustomed over the centuries to have Christians attacked, yet we are back in church the next day,” said Angaelos.

“It is a sign of resilience, strength, and commitment, but here—with COVID-19—it would be irresponsible.”

Instead, the Copts have a different heritage to rely on. When people ask him how he is coping in isolation, Angaelos simply replies: “I am a monk, I’ll be fine.”

Monasticism began in Egypt with the third-century St. Anthony and is the characteristic mark of Coptic spirituality. Coptic Orthodox bishops are drawn exclusively from the ranks of monks.

Angaelos warned that monastic practice could be detrimental if entered into rashly, without direction and mentorship. There is a fine line between the cell of a hermit—for liberation—and the cell of a prison—for incarceration.

To prevent the coronavirus quarantine from becoming the latter, two truths must be remembered.

“I am not alone, I am with God,” said Angaelos, “and I am gathered in communion with others.”

The monasteries of Egypt have pledged to devote all their energy toward prayer for the church, and the world, Angaelos shared. They know what is happening on the outside.

In the same manner, secluded Christians can pray for each other. This service of intercession ties believers together—and even with the communion of saints.

“We are distanced only logistically,” said Angaelos, “but we are still in the body of Christ.”

Eager to do the same for his now-isolated Brooklyn Maronites, Mansour channeled Vianney and phrases from the Divine Liturgy to craft his own offered prayer:

O Divine Ocean of mercy and compassion, be with us in our time of trial and difficulties.

Today I make an act of spiritual communion with you, the life-giving Trinity, Father, Son and Holy Spirit.

At this time I am not able to receive the sacred body and blood of my Lord, God and Savior Jesus Christ, but I choose to live in union with him and in the unity of the Holy Spirit.

I offer my day, my daily life, my joys and sorrows to you, for those around me, and for the whole world.

Be with us, O life-giving Triune God, for we know that nothing in this world has power over us.

O Lover of all people, have mercy on us and on the whole world.

It is a prayer Mansour freely offers to all, no matter the challenges they face. He said the church has endured persecutions and plagues throughout history but has always emerged, serving.

“If we cannot receive the body and blood of Christ for any reason, we can long for it,” he said.

“If we cannot be in the reality of Communion, we can achieve it, spiritually.

“Neither plague nor persecution can snuff out the church of Christ.”