New appeals for digital offerings in Kenya and Rwanda face pushback from congregants sheltering at home and out of work
Tonny Onyulo in Nairobi|April 6, 2020 10:05 AM 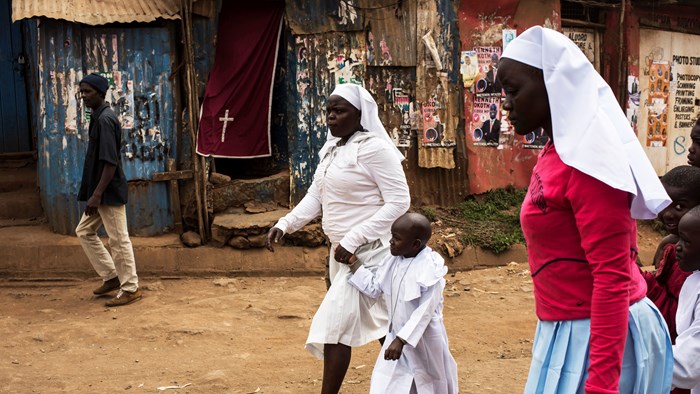 Pastor Victor Wafula preached to an empty auditorium as he decried low offerings due to low attendance, as his Nairobi congregants remained in their homes due to fear of the new coronavirus.

“We should be worried as preachers when people don’t come to church due to fear of COVID-19,” he said, pacing around the pulpit at Kibera United Kingdom Church with a microphone at hand. “Today the seats are empty and we will have no offerings and tithes. How are we going to survive?”

Wafula, who hired a few members to videotape his March 22 sermon and later post it on Facebook for the wider congregation to watch from their homes, further encouraged members to give via mobile money transfer or online payment platforms. Many of his congregants live in Kibera, the largest urban slum in all of Africa.

“Let’s honor God with our finances and stay faithful to him,” he said. “Coronavirus should not be the reason for people not to tithe. … If we give out our offering, then truly God can end this virus.”

Wafula’s appeal came two weeks after Kenya’s president, Uhuru Kenyatta, suspended religious gatherings and worship services across the country indefinitely to prevent the further spread of COVID-19 disease, which has resulted in 6 deaths and more than 150 confirmed cases in the country.

Schools run by churches have also been shut down, and pilgrimages for religious observances and festivals have been canceled, both reducing church revenues.

Africa has an estimated population of 1.2 billion people. A sizable percentage lives below the poverty line, and with the current pandemic, many face tough economic times.

Some churches fear for their future as offerings and tithes continue to dwindle week by week, resulting in cutbacks to programs and personnel.

Bishop Daniel Chemon of the Full Gospel Churches of Kenya said the COVID-19 outbreak has led to the cancellation of many church programs, including outreach to the needy, due to the lower offerings as many members heed government directives and no longer come to church.

“Our church used to overflow with worshipers. But today, you can see people are scattered and seats spread about two meters apart due to fear of COVID-19,” Chemon said during a worship service last month. “This has led to a drastic reduction in the offering that was collected across all the churches in the county. We need to pray for our country.”

Pastor Humphrey Wesonga of Winners of Soul Church in Kariobangi, a low-income residential estate in northeastern Nairobi, said some ruthless church leaders have been exploiting vulnerable worshipers by telling them to give lots of money for God’s work in order for them to be rewarded with riches. Now, he said, it was time for them to support their followers instead.

“They are used to getting easy money by fleecing their flocks,” said Wesonga, who oversees a congregation of more than 500 people. “This is the best time to also assist their members because of the current economy. People are not running their businesses, and others stay home because of the coronavirus. How can a man of God ask for tithes and offering at this time, when everyone is facing financial difficulties?

“People should not be forced to tithe,” Wesonga said. “God wants you to enjoy giving to him and to others.”

The situation is the same in neighboring countries. Rwanda, which has so far reported more than 100 COVID-19 infections, has seen an increase in churches soliciting digital offerings from members, even as many face economic hardship from coronavirus-related closures.

“This is the best time to try God by tithing,” Olive Ndayisenga, pastor of Evangelical Reformed Church in Kigali, Rwanda’s capital, recently urged his congregants by text message. “I encourage you to continue sending your tithes and offerings and God will bless you.”

The Association of Pentecostal Churches in Rwanda (ADEPR) circulated letters to its members encouraging them to still give their tithes. In one of the letters, members are advised to use offertory boxes located on church premises, or to send the money via mobile transfer. Seventh-day Adventist, Catholic, and Anglican leaders also directed their members to stay at home and to pay their tithes and offerings through mobile transfers.

Such appeals by religious leaders have not gone well with some church members and government officials.

Grace Uwimana was forced to close the Kigali restaurant she owns after the government suspended social gatherings to prevent the spread of the pandemic.

“It's very difficult to earn a living here since many of us closed our businesses,” said the 45-year-old mother of three. “We don’t know when this virus will go away. I’m just spending the money I used to save to buy food and other necessities.”

Uwimana attends Ndayisenga’s church and urges her head pastor to be compassionate amid the financial difficulties prompted by the pandemic.

“We have no money right now to give to the church,” she said. “We are also suffering and sleeping on an empty stomach because we are not going to work. Our head pastor should understand the situation and give us time to recover.”

Some members of Rwanda’s government have instead advised faith-based organizations and churches to support members who are going through financial difficulties and to stop demanding offerings from them.

“It’s time for church leaders to use their influence and savings to support their members,” stated Edouard Bamporiki, the state minister for youth and culture. “They should be supporting vulnerable people rather than the vulnerable people supporting churches. It’s unacceptable for leaders to demand offerings and tithes from their members at the time many are facing economic difficulties.”

Usta Kayitesi, the CEO of the Rwanda Governance Board which regulates faith-based organizations, said the government does not regulate tithing and it was “normal” for churches that already had digital offering options to remind congregants about them.

But she also said the ADEPR statement was poorly timed and “lacked the human connection.” “There was nothing to indicate what they intend to use the money for, whether it is to support vulnerable members or go towards activities that support people at this particular time,” Kayitesi told KT Press, a Rwandan news outlet.

“We would expect the church to show responsibility and [empathy] and play its role in supporting the weak in their communities, show[ing] love and care instead of looking to get more money from the members who are already in a precarious situation.”

Pastor Peter Niyigena of Kigali’s Fellowship Church of God agreed with the government’s advice, saying the focus should not be on money as the country battles COVID-19. He noted that one cannot serve both God and money.

“Many of my colleagues think that we should always be receiving money and gifts from our worshipers, but that’s wrong,” said Niyigena, whose church is located in the Rwandan capital’s Kangondo slum. “We should also be people who can give and support others especially vulnerable people in society. Right now it’s time for the church to unite and pray for our country. It’s not time to start soliciting for offerings and tithes.”

Wafula, pastor of the Kibera church, disagrees, saying government officials across the continent were misadvising members of the church to disobey the Word of God.

“People should be faithful in giving their tithes and offerings whether in crisis or not,” he told CT. “God doesn’t change with seasons.”