The university’s board of trustees met Friday following controversy over a photo circulating on social media.
Kate Shellnutt|August 7, 2020 04:00 AM 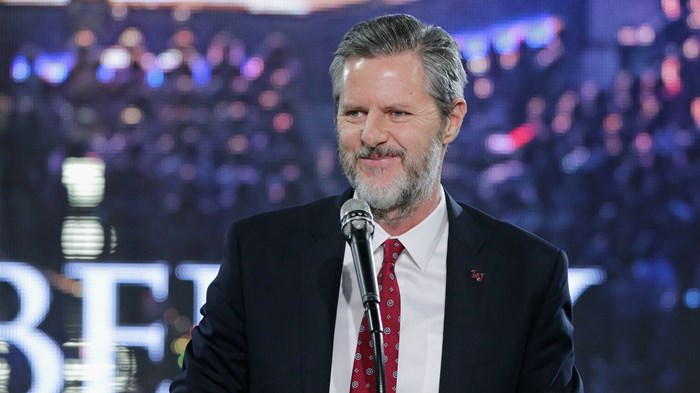 Jerry Falwell Jr. has agreed to take an indefinite leave of absence from Liberty University, the evangelical school he has led since 2007 as president and chancellor.

The executive committee of Liberty’s board of trustees, of which Falwell is a member, met today and made the decision, according to a statement posted on the university site. The leave is effective immediately.

The announcement did not indicate the reason for Falwell’s leave. In a follow-up statement, board chair Jerry Prevo cited the “substantial pressure” on Falwell’s leadership as well as the “concerns of everyone in the LU community.”

This week, a wave of Liberty alumni and supporters spoke out against Falwell after a recent photo circulated of him posing with a woman at a party with their zippers down and midsections exposed.

The critics included a US Republican congressman, an executive board member of the state Southern Baptist Convention (SBC), and several evangelical pastors. Multiple members of the Liberty community told CT they had been hopeful the criticism would shift the university’s response to the latest controversy and were encouraged by the board’s response.

Marybeth Davis Baggett, who concluded 17 years as a professor at Liberty this spring, told CT she was “surprised and profoundly grateful to hear about the board’s decision.” Baggett didn’t expect the board to recommend leave since Falwell had kept his position despite prior scandals.

“I am relieved for my former colleagues, for their students and parents, and for Liberty’s alumni that there is now an opportunity for the board to install leadership more fitting of the high calling of this great institution,” she said.

A group of African American alumni who previously called for Falwell’s resignation said the board “made the right decision.” Pastors Chris Williamson, Eric Carroll, and Maina Mwaura said they hoped the move would allow for healing for Falwell and for godly leadership for its next season.

Karen Swallow Prior, another former Liberty professor who left earlier this year, likewise extended prayers for the university and the Falwells.

“Liberty University is a Spirit-filled university with many godly professors doing the good work of teaching and discipling young Christians. Any squandering of these talents is grievous, but fortunately we serve a God who, I believe, will continue to bless this school into the future,” she wrote in a statement to CT. “I don’t believe I poured my life into the school for two decades for nothing. I love the Falwell family and will be praying for godly sorrow that brings the repentance that leads to life.”

A current professor, who asked to be unnamed because Liberty faculty do not have tenure, said Falwell’s leave “begs the question, ‘What’s next?’” since the school has not shared plans regarding an interim leader or his potential return.

He celebrated the board’s decision as addressing “a disconnect between what the university has been asking from its students and ... hypocritical behavior from leadership.”

The response to the vacation photos had swelled on Twitter on Thursday night, as Rep. Mark Walker of North Carolina, a former pastor who serves as an advisor to Liberty’s music department and spoke at a campus-wide convocation last year, tweeted, “Jerry Falwell Jr’s ongoing behavior is appalling … I’m convinced Falwell should step down.”

Alumnus Colby Garman, pastor of Pillar Church in Virginia and an executive board member with the SBC of Virginia, said the board’s support had been “bewildering” and, “If I posted the photo my church would rightly ask me to resign.”

Dean Inserra, a Southern Baptist pastor in Florida, called on the board to “show some courage.” Mark Davis, a pastor in Texas who also graduated from the university, said he worried Falwell dishonored “the name of Christ and the reputation of Liberty.”

Falwell clarified in an interview with a Lynchburg radio station that the pictures came from a party held on a yacht during his family vacation. He said it was “just in good fun” and apologized for embarrassing the woman in the picture, his wife’s assistant.

During his tenure—succeeding his father and the school’s founder, Jerry Falwell Sr.—the younger Falwell has expanded Liberty into one of the biggest Christian colleges in the world, now reporting an enrollment of over 120,000 students. But his leadership has also drawn controversy, including around his politics—such as his friendship with President Donald Trump—and personal life—like photos of him and his family at a Miami nightclub.

In June, Falwell apologized for a tweet that included an image of the yearbook photo from Virginia Gov. Ralph Northam’s blackface scandal. Dozens of black alumni said he should “withdraw the racist tweet” and resign to focus on politics.

Though he deleted the post, a string of black students and employees left Liberty this summer over concerns with its treatment of racial issues. Trustees had addressed the tweets with Falwell and defended his leadership.

Even before the news of his leave, multiple Liberty professors told CT that the concerns raised by the recent controversy had taken on more urgency and weight than before.

“It feels like more people are speaking up,” one said, “and it’s hot on the heels of his misstep earlier this summer.”

Faculty return to the Lynchburg, Virginia, campus next week, and classes begin August 24.

Four members of Liberty’s board of trustees and Liberty’s spokesperson were contacted by CT Thursday night for comment on the photo and resulting criticism. They did not respond prior to the announcement.

On Friday evening, SBC of Virginia executive director Brian Autry, who is a Liberty trustee but not a part of the executive committee that met with Falwell, tweeted that he was “thankful” for the decision asked followers to “continue to be prayerful in the days ahead for all concerned.”