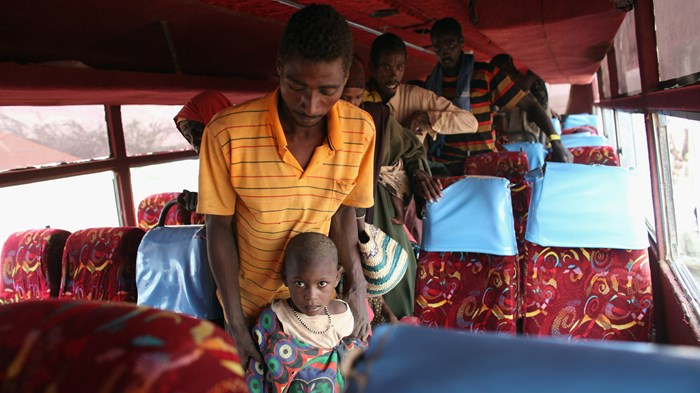 Christians traveling on buses for Christmas holiday close to the border with Somalia have recently become targets of the Somalian militant group, al-Shabaab.

According to Christians in the region, traveling has become a risky endeavor, as the militants have seized buses on remote roads. Locals in the mostly Muslim communities in the area have been accused of aiding the attacks, some of which have been fatal.

Kenyans are bracing for further attacks by al-Shabaab as the United States carries out plans to withdraw its troops from Somalia, which broke off diplomatic relations with Kenya on Tuesday, saying Kenya was meddling in its elections.

In response to the attacks, Christian and Muslim leaders have stepped up interfaith dialogue in hopes of reining in the bus attacks and other threats to the border region’s small Christian community.

“We continue to pray and talk. The interfaith dialogue has brought a great change in this region,” Nicholas Mutua, a Catholic priest in Garissa, told Religion News Service. “The buses are moving. All is fine, but we have to be on alert. The militants are very unpredictable.”

Al-Shabaab, the al-Qaida affiliate in East Africa, has posed a threat to regions along the border for almost a decade, staging attacks on security forces and government outposts in Mandera, Wajir, Garissa, and Lamu counties. Improvised explosive devices have been used to strike security forces, police posts and telecommunication masts along roadways.

Many of the non-Muslims caught in the recent bus attacks have been teachers traveling to other parts of Kenya for Christmas celebrations. Some church leaders have also been killed in the attacks.

“The target is the Christians and for their faith,” said Grace Kuthea, a teacher who has worked in the region for several years. “They usually take time for the people to forget, before they strike again.”

But the recent attacks on Christmas season travelers and some places of worship have motivated the faith leaders. “The Muslims are not against Christians in the region,” said Josiah Joab, a Pentecostal pastor who had worked in Garissa until March this year.

This isn’t the first time that al-Shabaab has come across the border to assault civilian transportation. In November 2014, militants hijacked a bus traveling from the northern Kenya town of Mandera and killed 28 non-Muslims, separating the passengers according to who could recite the Islamic creed.

A second bus attack in the Christmas season in December 2015 failed after Muslim passengers refused to identify the Christians among them to the attackers.

Sarah Farah, a teacher who later died while protecting Christians, was later honored. A short film, Watu Wote (“all of us”), based on the incident was later nominated for an Academy Award.

Mutua believes that faith leaders’ stand against the violence then saved lives. “I think the interfaith dialogue we have been having contributed to the teacher’s action,” he said.

Shaykh Hassan Ole Naado, the acting national chairman of the Supreme Council of Kenya Muslims, said solidarity with Christians was part of the effort by all Kenyans to counter al-Shabaab.

“Kenyans have teamed together to raise their voices. It cuts across the faiths,” said Ole Naado. “Mosques and churches are playing their roles, preaching peace.”

“All of us (Kenyans) are victims of a foreign problem in Kenya,” said Ole Naado.