Chinese American Churches on the Frontlines of Coronavirus Vigilance

Attendance has dropped as much as 50 percent this year.
Yonat Shimron - Religion News Service|February 25, 2020 07:27 PM 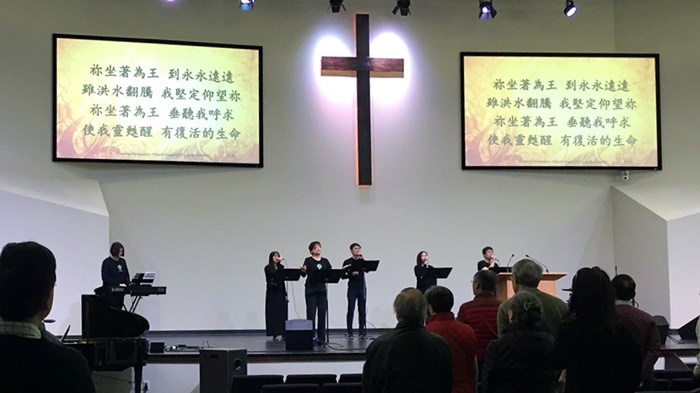 There has been no sustained community transmission of the coronavirus in the United States so far, and many Chinese churches such as Raleigh Chinese Christian Church (RCCC) are doing their best to keep it that way.

Taped to the entrance of the church’s glass doors is a yellow notice with the word “ATTENTION” in capital letters. It warns parents not to bring their children to church if they’ve traveled to Asia in the past 14 days.

Churches such as RCCC—a nondenominational congregation with services in Mandarin, Cantonese, and English—have taken it upon themselves to self-quarantine, in keeping with Centers for Disease Control guidance.

Many others have taken additional precautionary measures, such as canceling small group gatherings, Sunday lunches, and other communal events.

“I think there’s caution,” said Jerry Miller, RCCC’s youth pastor. “There may be a little bit of fear mixed in with that too, which is understandable.”

The outbreak of the virus, which began in Wuhan, China, has sickened thousands and has killed more than 2,700 people. At least 35 people in the US are infected with the so-called COVID-19 virus—all linked to overseas travel, including 18 people evacuated from the Diamond Princess, a cruise ship docked in Yokohama, Japan.

No Americans have died from the coronavirus thus far, and those infected have not spread it to the wider community.

Still, it is the Chinese American community that has borne the brunt of the health scare and it has also been the one to implement wide-ranging safety precautions.

It Doesn’t Matter If the Coronavirus Whistleblower Was a Christian

The virus impeded communal celebrations of Chinese New Year, which fell on January 25. The lunar holiday is typically a time when hundreds of millions of people travel in China to reunite with family.

Stateside, parties, get-togethers, and other holiday celebrations were nearly all called off.

Attendance at US Chinese churches dropped as much as 50 percent beginning in late January. It is slowly beginning to pick up, according to half a dozen pastors interviewed for this story.

Tan, whose church is part of the Southern Baptist Convention (SBC), said many US Chinese churches have members grieving the loss of family or friends who have died in Wuhan, a city of 11 million people in central China.

“We have one woman whose father passed away because of the coronavirus last week,” Tan said, adding that this isn’t just affecting those in China. “It has hit home pretty personally.”

The major airlines—Delta Air Lines, American Airlines, and United Airlines—suspended service to mainland China on January 31, so any Chinese Americans headed to China for work, school—or the funeral of a loved one—are unable to go. Chinese nationals who were visiting the US before the air travel restrictions were put in place cannot return home; so too, Americans who happened to be visiting China before the epidemic started. 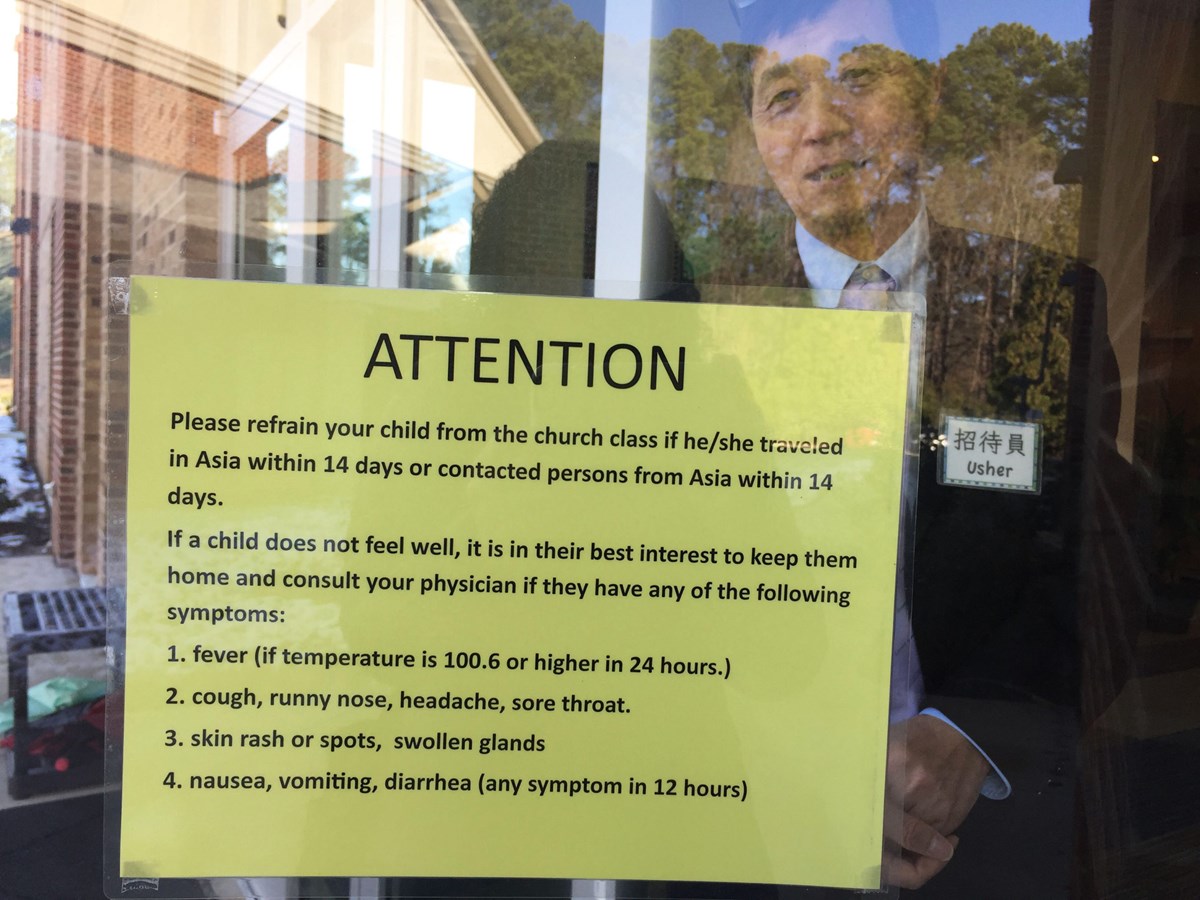 The sign outside Raleigh Chinese Christian Church warns parents not to bring their children to church if they traveled to Asia in the past two weeks.

Chinese Americans are mostly secular; 52 percent do not affiliate with a particular religion. But 31 percent consider themselves Christians and 15 percent are Buddhist, according to a Pew Research Center survey.

Most Christian Chinese Americans are Protestant and describe themselves as evangelical. Nondenominational and Baptist churches dominate.

There are between 200 and 250 Chinese churches affiliated with the SBC, said Amos Lee, executive director of the Chinese Baptist Fellowship of USA and Canada. Most are small with about 100 members, but there are larger ones, especially in the big cities such as San Francisco, Los Angeles, and Dallas.

To avoid contagion, Lee said Southern Baptist Chinese churches have been advised to use individualized pre-filled and sealed Communion cups containing grape juice and a wafer.

Many churches are used to pre-filled Communion elements and have been using them since the global SARS epidemic in 2003, Lee said.

Chinese Baptist Church (CBC) in Raleigh set out a basket with face masks at the door, though Jane Pan, the pastor, said few have taken advantage of them.

“We did have some that wore face masks in the beginning, but not anymore,” said Pan.

The church, located a few blocks from North Carolina State University, has canceled its Chinese student fellowship meetings this month. The fellowship, which includes about 40 students, may resume meeting in March, though no decision has been made.

Likewise, the church has called off Sunday’s communal lunch after services.

Charlotte’s Chinese Baptist Church changed the way it serves Sunday lunch. Instead of having people line up buffet style, it now arranges plates heaped with food on a table and servers wearing face masks and gloves hand them to church members.

“Our church is on alert,” said Kevin Fu, a lay leader. “That’s not just our church. It’s the whole Chinese community.” 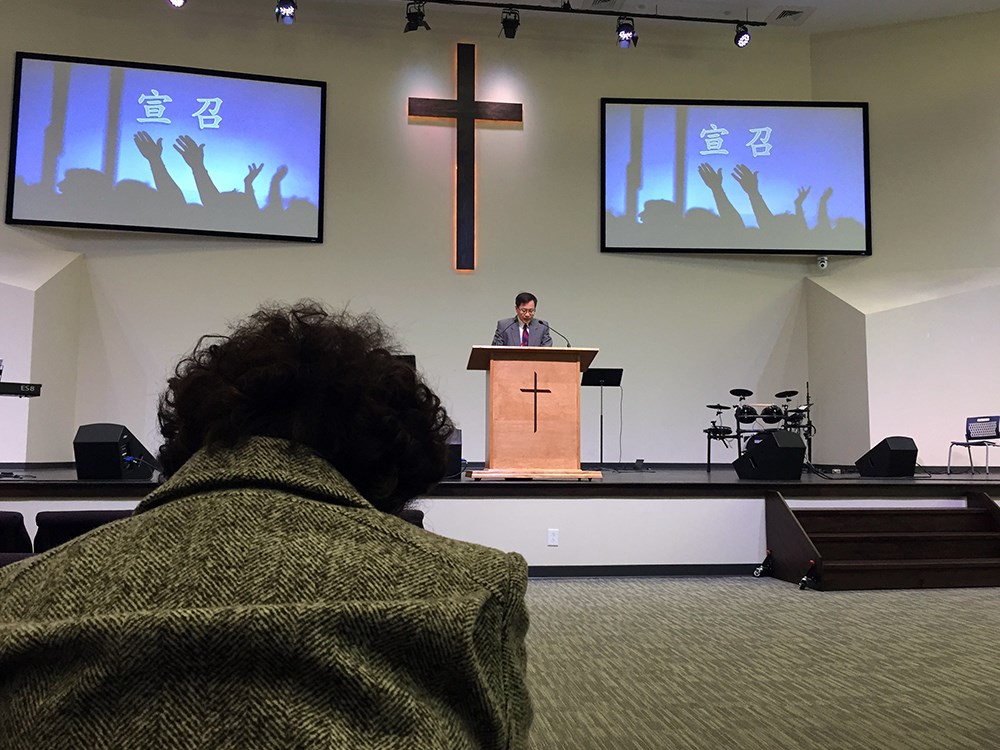 A Chinese American woman bows her head in prayer at Raleigh Chinese Christian Church on Feb. 23 in Cary, North Carolina.

Chinese restaurants and grocery stores in the US and across the world have reported sharp sales declines.

In response, Chinese American churches and nonprofits have also been fundraising for the people of Wuhan. Chinese Americans from across the Carolinas donated toward an effort to buy boxes of face masks.

Other organizations have offered help, as well. Samaritan’s Purse, for example, donated 78 pallets of medical supplies and personal protective equipment through the US State Department, said Kaitlyn Lahm, a spokesperson for the North Carolina-based ministry.

World Vision distributed masks to 50,000 people in the impacted province.

The New York Timesreported that several donations from overseas faith-based groups have not been well received. Local officials have rejected some donations because they fear trouble for cooperating with what the centralized government considers to be illegal organizations. The government in China recognizes five faiths, but at the same time it co-opts state-sanctioned religious organizations.

Cathy Kimball, a resident of Cary who attends CBC Raleigh, said that despite the difficulties, church members are not isolated. Social media has allowed Chinese Americans to stay in touch with friends and family in China, primarily through WeChat, the Chinese messaging and social media app.

“Everybody is involved discussing the topic,” said Kimball, a 56-year-old permanent resident who has lived in the US since 2003 and manages a local Chinese news site. “We don’t feel alone.”

Just when things will return to normal is hard to say.

“There’s a lot of uncertainty as to what to expect,” said Lee. “We really don’t know what the whole picture is like. So people are taking it cautiously.”

Chinese American Churches on the Frontlines of Coronavirus Vigilance

Chinese American Churches on the Frontlines of ...