With her husband Arlin, she rejected secular education and pioneered an alternative that started with student discipline.
Daniel Silliman|July 1, 2020 09:30 AM 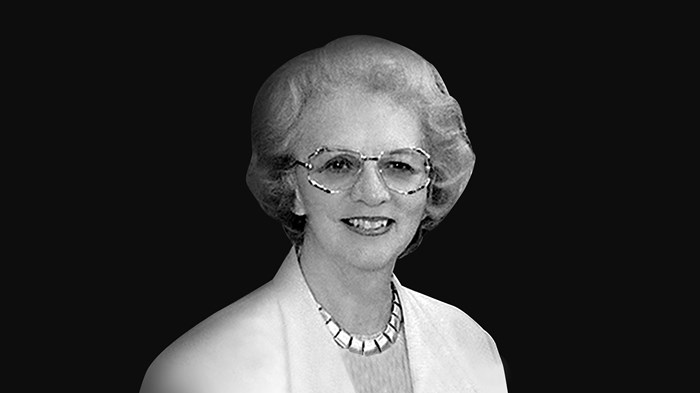 Beka Horton, the “Beka” of A Beka Book and the cofounder of Pensacola Christian Academy and Pensacola Christian College, died on June 27 at the age of 90. Over the course of 50 years, Horton and her husband, Arlin, translated conservative Baptist beliefs about authority, discipline, sin, and salvation into a pedagogical package they promoted as traditional, biblical education. Their work shaped much of the Christian school and homeschool movements.

When Horton retired in 2012, her curriculum company brought in annual revenue of about $2 million, publishing the textbooks and readers used in 10,000 Christian schools and by more than 100,000 homeschool students, according to internal estimates. Rebranded as Abeka in 2017, the company, along with Bob Jones University, is one of the two major producers of Christian school curricula.

The couple never planned on building an education empire, according to Horton. They were only trying to reject what they saw as the secular and anti-Christian influences on mainstream educational philosophy and stay true to their commitment to be separate from the world.

“Our business is to be faithful. This is God’s work, not ours,” she said. “We didn’t want to live in disobedience, so we’d have to do what God wanted us to do.”

Horton was born in East Tennessee in 1929 and became a Christian as a teenager at a local Baptist church. Her newfound faith soon put her in conflict with her mother, as the young Beka Hall struggled with submission to authority. Her mother forbade her from going to Sunday night youth group, because she’d have to return home after dark on a bus, and it didn’t seem safe.

“My mother was very strict,” Horton recalled. “I lived from one week to the next just for church, especially for the Sunday night youth group. This was my great joy.”

The young Christian thought perhaps she could disobey her mother, since she would be obeying God, but was then convicted she was making excuses for her own rebellion. She chose to stay home. She spent the evening listening to Charles Fuller’s Old Fashioned Revival Hour on the radio and praying her mother would change her mind in the future.

The next week, her prayer was answered, and she was allowed to go to youth group. It was a lesson she carried with her the rest of her life, even as she rose to have extraordinary authority in a religious culture that sharply limited women’s opportunities for leadership.

Horton met Arlin when they were both students at Bob Jones University in South Carolina. The two were training to be teachers. They were also both committed to what was called fundamentalism. For them, that not only meant affirming traditional Christian doctrines, such as Jesus’ incarnation and resurrection, but adamant belief in the infallibility of the Bible and in the inspiration and inerrancy of the King James translation. The Hortons, like other fundamentalists, believed Christians could be easily polluted and needed to be willing to separate themselves from the world and other Christians to protect their purity.

They got married their junior year and graduated from Bob Jones in 1951. The next year, they answered a “Christian Worker Wanted” ad to start a children’s ministry and a school in a place they’d never heard of: Pensacola, Florida. They packed up a 1935 Plymouth and headed south.

“I told them I would do the work and the work would speak for itself,” Arlin Horton later recalled. “And if you get me, you get my wife too.”

The couple couldn’t have children and occasionally made reference to their infertility to explain their focus on ministering to children. At the time, however, they spoke more about their belief that children needed Jesus and could come to a saving faith in Christ, despite their young age.

The Hortons built a chapel on wheels and hauled it to the different neighborhoods of Pensacola to reach the children whose parents wouldn’t take them to church. They were a team, but Beka Horton was the star. She played the pump organ to attract neighborhood boys and girls, and then told riveting Bible stories with a flannelgraph.

“You made everything so interesting,” one student wrote Horton years later. “The people from the Bible you were teaching about seemed so real. And I still remember the song you taught—‘The B-I-B-L-E, that is the book for me.’”

Horton took that same flannelgraph onto TV, with a local children’s show called “Aunt Beka’s Bible Stories.” The 30-minute program ran weekly for more than 20 years, evangelizing children and advertising the Hortons’ school. When people asked about the education program at the new Christian academy, Arlin Horton would ask them them if they had seen “Aunt Beka” on television. “That’s my wife,” he would say, “and that’s how we teach Bible.”

Bible was a central subject at the school. But what made the academy distinctive was its emphasis on memorization. Students drilled and learned by rote, cycling through flashcards to learn phonics, math, and facts about American history.

The Hortons believed secular education was too lax, too focused on a child’s creativity and originality, and trying too hard to make education seem like play. Some parts of learning are intrinsically unpleasant, according to one teaching guide the Horton’s wrote, and Christian educators should not forget their pupil’s sin nature.

“If Christian educators give one inch on discipline,” an early A Beka teaching guide said, “the devil will take a mile.”

The Pensacola Christian Academy graduated its first class of four students in 1967. A few years later, the Hortons started offering “clinics” for Christian educators, first the Principals Clinic, then Summer Seminar and Teachers Clinic. By the time they retired, nearly 200,000 teachers had gone through one of the clinics, learning the Horton’s teaching methods.

They also began producing materials for the rapidly growing number of Christian schools and launched A Beka Book in 1972. At first they printed teacher training guides and reproduced out-of-print school texts, with added Scripture texts and religious imagery. Then they expanded with a readers for grammar school students, math books for 3rd–8th grade students, and a United States history text.

Beka Horton lead the development of the curriculum and gave her name to the company. A Beka served a rapidly expanding market. In the late ’70s and early ’80s, there were, by some estimates, an average of three new Christian schools opened every day. Some historians have said this was driven by fear of racial integration, but most of the schools and Christian parents pointed to secularizing public education, specifically classes on evolution and sexuality.

Educational experts have roundly criticized the Abeka curriculum. They say it teaches theological dogma instead of biology in science textbooks filled with young earth creationism. And the history textbooks downplay the horrors of slavery and denigrate non-white cultures while attributing American hegemony to God’s providence and asserting the biblical basis for capitalism.

Abeka and its customers have been unfazed by the criticism, saying the curriculum teaches their sons and daughters the biblical worldview they want to impart. The Abeka program also produces disciplined children.

As one teacher at a Church of Christ school in New Mexico explained in 1984, “A Beka says that when a child is not writing or reciting, he’s supposed to be sitting with his hands in his lap and, if called upon, stand beside his desk and recite. They must also say ‘yes ma’am’ and ‘no ma’am.’”

In 1974, the Hortons decided to expand their education project into higher education, after Bob Jones III rejected their concerns that Bob Jones University had become inflected with secular approaches to education and teaching philosophy. The Hortons launched Pensacola Christian College with 100 students.

The college emphasized religious discipline, strictly separating students by sex, and requiring the undergraduates to memorize the King James Bible, sing hymns before meals, and attend the campus church, “which operates in the spirit of an independent Baptist church,” according to the college handbook.

The school sets spiritual outcomes first, on its list of student learning objectives, followed by intellectual, moral, and social outcomes. There are now about 4,000 students enrolled at the college, which received accreditation in 2013.

To the end, Horton insisted it was not her or her husband’s genius or hard work that accomplished all this. It was done, she said, through continual submission to God.

Horton’s funeral was held July 1 at Pensacola Christian College. She is survived by her husband.