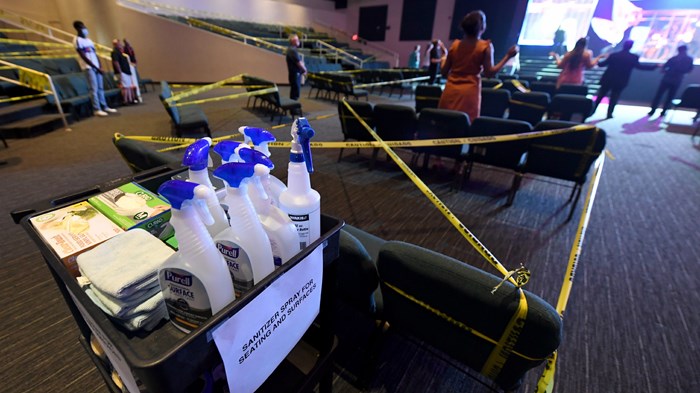 A sharply divided US Supreme Court denied a rural Nevada church’s request late Friday to strike down as unconstitutional a 50-person cap on worship services as part of the state’s ongoing response to the coronavirus.

In a 5-4 decision, the high court refused to grant the request from the Christian church east of Reno to be subjected to the same COVID-19 restrictions in Nevada that allow casinos, restaurants, and other businesses to operate at 50 percent of capacity with proper social distancing.

Calvary Chapel Dayton Valley argued that the hard cap on religious gatherings was an unconstitutional violation of its parishioners’ First Amendment rights to express and exercise their beliefs.

Chief Justice John Roberts sided with the liberal majority in denying the request without explanation.

Three justices wrote strongly worded dissenting opinions on behalf of the four conservatives who said they would have granted the injunctive relief while the court fully considers the merits of the case.

“That Nevada would discriminate in favor of the powerful gaming industry and its employees may not come as a surprise, but this Court’s willingness to allow such discrimination is disappointing,” Justice Samuel Alito wrote in a dissent joined by Clarence Thomas and Brett Kavanaugh.

“We have a duty to defend the Constitution, and even a public health emergency does not absolve us of that responsibility,” Alito said. “The Constitution guarantees the free exercise of religion. It says nothing about freedom to play craps or blackjack, to feed tokens into a slot machine or to engage in any other game of chance.”

Kavanaugh also wrote his own dissent, as did Justice Neil Gorsuch, who said:

In Nevada, it seems, it is better to be in entertainment than religion. Maybe that is nothing new. But the First Amendment prohibits such obvious discrimination against the exercise of religion.

The world we inhabit today, with a pandemic upon us, poses unusual challenges. But there is no world in which the Constitution permits Nevada to favor Caesars Palace over Calvary Chapel.

David Cortman, senior counsel for Georgia-based Alliance Defending Freedom representing the church, said in an email sent to the Associated Press late Friday that they were disappointed in the ruling but will continue to work to protect Calvary Chapel and others “from discriminatory policies that put religious groups at the back of the line for reopening.”

“When the government treats churches worse than casinos, gyms, and indoor amusement parks in its COVID-19 response, it clearly violates the Constitution,” he said.

The group of Nevada churches challenging the policy included Southern Baptist congregations, and leaders of the Ethics and Religious Liberty Commission were also disappointed in the decision.

“Nevada from the start should have relied on pastors and religious leaders to be partners in combating Covid-19 as they have apparently done with casino magnates,” said ERLC president Russell Moore. “As virtually every court and almost every religious organization has affirmed: the state has legitimate rights and obligations to protect public health in an emergency such as this. Every restriction, though, must be both rooted in compelling interest and be consistently applied.”

The governor’s office didn’t immediately respond to a request for comment.

Calvary Chapel Dayton Valley appealed to the 9th US Circuit Court of Appeals last month after a US judge in Nevada upheld the state’s policy that allows casinos and other businesses to operate at 50 percent of normal capacity.

The appellate court in San Francisco is still considering the appeal, but it has denied the church’s request for an emergency injunction in the meantime. Its ruling July 2 pointed to the Supreme Court’s refusal in May to strike down California’s limit on the size of religious gatherings.

The church in Nevada’s Lyon County appealed to the Supreme Court six days later, asking for an emergency injunction prohibiting the state from enforcing the cap on religious gatherings at least temporarily while the justices consider the merits of the case.

“The governor allows hundreds to thousands to assemble in pursuit of financial fortunes but only 50 to gather in pursuit of spiritual ones. That is unconstitutional,” its lawyers wrote in their most recent filing to the high court last week.

The church wants to allow as many as 90 people to attend services at the same time — with masks required, sitting 6-feet apart — at the sanctuary with a capacity of 200. Other secular businesses in the state that are allowed to operate at half capacity include gyms, hair salons, bowling alleys and water parks.

“Temporarily narrowing restrictions on the size of mass gatherings, including for religious services, protects the health and well-being of Nevada citizens during a global pandemic,” they wrote.

Alito said in the lead dissent that by allowing thousands to gather in casinos, the state cannot claim to have a compelling interest in limiting religious gatherings to 50 people — regardless of the size of the facility and the measures adopted to prevent the spread of the virus.

“The idea that allowing Calvary Chapel to admit 90 worshipers present a greater public health risk than allowing casinos to operate at 50% capacity is hard to swallow,” he wrote.

Kavanaugh said he agreed that courts should be “very differential to the states’ line-drawing in opening businesses and allowing certain activities during the pandemic.”