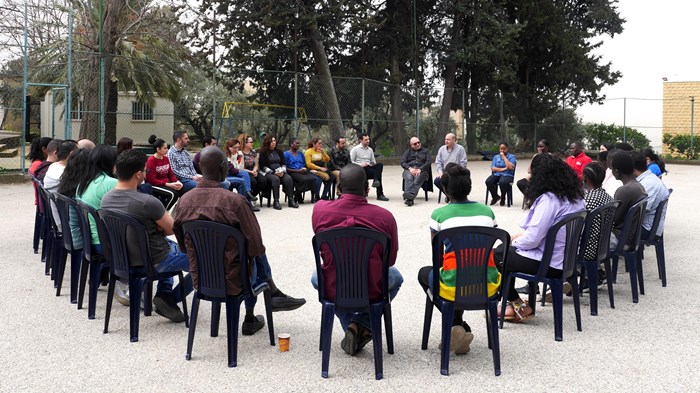 While Liberty University came under criticism for allowing students the option to stay on campus during the coronavirus outbreak, many other schools were also faced with a dilemma concerning the 1.1 million students who came from abroad.

According to a Quartz survey of 36 universities who host a third of the United States’ international students, 26 told those students to leave campus.

But Sudanese students at Lebanon’s Arab Baptist Theological Seminary (ABTS) did not have a choice—even with tickets in hand.

Lebanon was one of the first nations to implement COVID-19 restrictions. Its first case was recorded on February 21, and by March 9 schools were shut down.

“It was a joyous atmosphere,” said the ABTS dean of students, “but I had sadness in my heart because I knew what I had to say.”

Founded in 1960 and located in the mountains overlooking Beirut, the seminary has a total enrollment of 160 students. Twenty-six are Lebanese, and the majority of ABTS students pursue distance learning in its online certificate program from as far afield as Iraq, Algeria, and Chad.

Campus dorms host only the school’s 34 international students pursuing bachelor of arts or master of arts degree programs in theology. Melki told these residential students that it was time to fly home.

“I felt my dream was canceled,” said Noha Kassa, a 28-year-old first-year student from Khartoum.

“It was a wise decision by the seminary, but it didn’t feel right or fair.”

Having only arrived in Lebanon last October, Kassa’s life was once again thrown into chaos. An active participant in the Sudanese revolution the year before, she had enrolled in ABTS—the seventh in her family to do so—to prepare for ministry back home.

The transitional government in Sudan has granted new freedoms, Kassa said, that include sharing the gospel. And despite the patriarchal culture even in the church, the prominent revolutionary participation by women has created new pioneering opportunities.

She hoped to be a role model.

On March 15, Lebanon announced a state of medical emergency. Among its provisions was a complete sealing of the nation’s borders—at midnight three days later.

If anyone wanted to leave, the clock was ticking.

No one expected the Yemeni student to go home. The seminary worked with each of the other nationality groups to determine the best course of action. But the weight of preparation fell on the largest contingent.

ABTS paid the change-ticket fees to advance students’ return date from the end of the semester to March 16. Quickly the Sudanese students packed their bags, loaded the bus, and prepared to run the gauntlet through Beirut International Airport.

They didn’t even get to leave campus.

With no advance notice, Sudan closed its borders also. Fortunately, the students had not yet boarded the plane. With a layover planned in Addis Ababa, they would have been stuck in Ethiopian quarantine.

But back on campus, they were a health risk. Single students shared a small dorm room with two twin beds. Married students lived in a communal house with 16 apartments and a shared kitchen.

And the Sudanese are very social.

“Living together, they became like a family,” said Elie Haddad, ABTS’ president.

“The only thing we can do is care for them and keep them safe.”

In the end, only the Egyptian students and the South Sudanese student were able to return home in time. The rest were put on strict lockdown.

Single students were moved to one per room. Everyone was given hand sanitizer, masks, gloves, and instructions on social distancing. Kitchen use was restricted to one family at a time, with sterilization procedures carried out after use. Off-campus trips were restricted to a weekly walk to the local grocery. If they touched anyone along the way, their clothes had to be washed immediately. No one was allowed in from the outside.

“The rules are hard,” said Kassa, “but they keep us safe.”

Eventually the students settled into a boring routine. The first two weeks were crucial to identify if someone was infected but asymptomatic. After that, though remaining vigilant, restrictions relaxed somewhat.

In terms of emotions, Melki said that the students were divided. Some wished they were back home with family. Others saw the silver lining.

“God allowed us to stay, and it is better,” said Youssef al-Nour, a 36-year-old second-year student from the Nuba Mountains region of Sudan. He is afraid for his family if the new coronavirus spreads rapidly.

“They don’t realize the danger they are in. It is not like malaria; there is no cure.”

Within the confines of campus, however, he and his 27-year-old wife Susanna—also a student—are safe. Much safer than if they had to risk contagion traipsing through crowded airports back to a substandard medical system.

Nour, also encouraged by the recent revolution, hopes to open a Sudanese missions agency. Susanna, born to a Muslim father but raised by her Anglican mother, wants to better connect the church to society, especially through the service of its women.

But now, instead of contemplating contextual theology, they tend the campus garden.

“Corona[virus] changed everything,” said Susanna. “Still, the seminary is our home.”

While the whole ABTS community meets weekly over Zoom, socializing with colleagues can continue—outdoors and six feet apart. Prayer and worship sessions remain a vital part of campus life.

“We have a certain freedom here,” said 49-year-old Rafed al-Bitar, a third-year student from Syria. “We can play, walk, and the campus is wide open.

“We are a little stressed, a little bored, and a little uncomfortable. But if you keep yourself safe, you keep others safe also.”

Unlike the others, Bitar did not come to Lebanon for seminary. With his wife, Heba, and two children, they arrived as refugees seeking asylum in Canada. While waiting out the process, he learned of ABTS and enrolled. His children went to school at a nearby orphanage.

Sharing the family house with Youssef, Susanna, and others, as Syrians they were challenged by the cultural and dialect differences with the Sudanese.

When invited over for “coffee,” Heba heard an Arabic word meaning “cheese.” Returning the invitation, when Bitar bade the Sudanese to “enter,” they heard him say “leave.”

But eventually, Bitar and Heba won praise from the ABTS administration for serving as parental stand-ins for the younger students. Unable to travel home themselves, they now serve their adoptive “family.”

“It is a hard life, it is not easy, but we can get through it,” said Heba.

“We thank God for the seminary and the administration. We are cared for so much better than others.”

By April, ABTS was able to rework the curriculum to shift the residential program online. Life is far from returning to normal, but at least education continues.

As does ministry—on campus. Making use of the empty guesthouse, the seminary is providing free accommodation for 32 doctors and nurses on the frontlines of COVID-19 care, so that they can socially isolate from their families. They keep separate from the students, but can rest together in community.

Off campus, Bitar’s outreach to fellow Syrian refugees is on hold. And despite Canada’s rejection of his emigration application, while at ABTS his geographical preferences changed.

“We will serve God wherever we are,” Bitar said. “But our country needs us more than the West.”

They now plan to return to Syria as soon as the borders open—whenever that is.