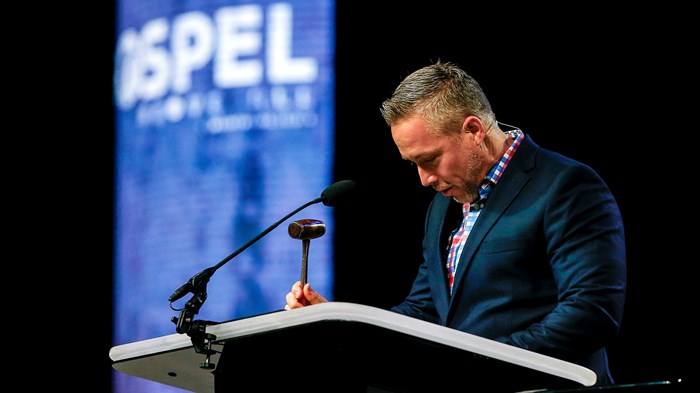 For most of their history, Southern Baptists have opened their meetings with a gavel named for a slaveholder.

The president of the nation’s largest Protestant denomination now says that gavel should be retired.

“Southern Baptists, I think it is time to retire the Broadus gavel,” said J. D. Greear in a Wednesday statement. “While we do not want to, nor could we, erase our history, it is time for this gavel to go back into the display case at the Executive Committee offices.”

The gavel, first used by SBC officials in 1872, was named for John A. Broadus, a Confederacy supporter and a founding faculty member of the Southern Baptist Theological Seminary, the SBC’s flagship seminary.

The SBC president said he had felt uneasy using the gavel at the 2019 meeting in Birmingham, Alabama. He was aware of Broadus’s racial views but also said he “did seem to change some of his positions later in life.”

Greear said the gavel’s presence was sending a mixed message from a denomination that was founded in 1845 in defense of missionaries who owned slaves.

“Here we were, a convention of nearly 48,000 independent, autonomous churches, meeting in a city that has been filled with (a) horrific history of civil rights abuses, making historic moves in the areas of diversity, abuse, and mission, using a gavel named after a Southern Baptist who owned slaves and was deeply involved in our founding,” he said.

Greear said he learned months after the Birmingham meeting that denominational presidents have a choice in what gavel they use. His office said no vote is required for that decision.

“The Broadus gavel is the one that has been used continuously to open the convention since 1872, but others were incorporated as well,” he said.

Greear is considering his options for which gavel to use next year but cited two named for missionaries.

According to a historical note in the denomination’s 1939 Annual, the Broadus gavel was given to the SBC at its meeting on May 9, 1872.

“The Rev. J. A. Broadus of South Carolina, presented to the Convention a mallet for the use of the President, which he had brought from Jerusalem for that purpose,” according to the note.

The Annual detailed the denominational presidents through whose hands the gavel had passed.

“If this gavel had the power to tell us what it has witnessed, we should be thrilled by its story,” reads the Annual. “As numberless points of order have been raised and all sorts of tangles rose to the surface, it has sent forth its sharp, decisive, imperious mandates in obedience to the parliamentary umpires in the chair.”

Greear’s statement came a day after he declared in an online address—that replaced one he would have given at the now-canceled annual meeting—that Southern Baptists should say “black lives matter.”

“Of course, black lives matter,” he said. “Our black brothers and sisters are made in the image of God.”

Greear added, though, that he didn’t align with Black Lives Matter, the organization founded in 2013.

“I think saying bold things like ‘defund the police’ is unhelpful and deeply disrespectful to many public servants who bravely put themselves in harm’s way every day to protect us,” he said. “But I know that we need to take a deep look at our police systems and structures and ask what we’re missing. Where are we missing the mark? And I’ll say that we do that because black lives matter.”

Greear was asked by Religion News Service in late May if there was any consideration of not using the Broadus gavel in 2020 or in future meetings.

“I was planning on using the Judson gavel or the Annie Armstrong gavel this year in Orlando,” he said in response. “Adoniram Judson was a missionary that inspired me and I named my son after him. Annie Armstrong demonstrated the missionary spirit that I believe Southern Baptists should be about.”

He added in his new statement that Armstrong “fought to send the first female African American missionaries” and Judson “was one of the first missionaries to travel to Burma, working there 30 years translating the entire Bible into Burmese and planting numerous Baptist churches.”