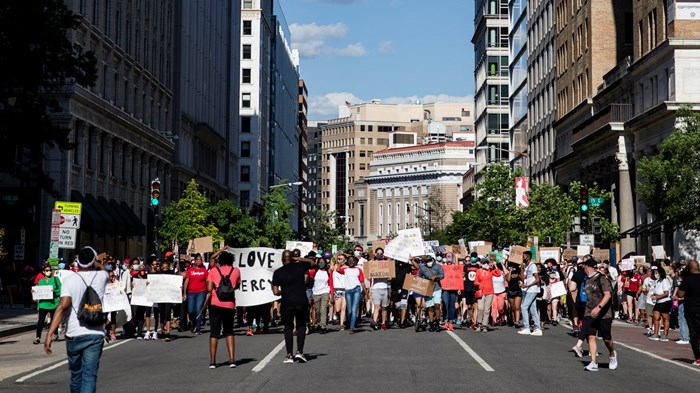 Utah Senator and former Republican presidential candidate Mitt Romney joined demonstrators against racial injustice on Sunday in a march to the US Capitol that was organized by evangelical Christian activists, telling reporters he was attending the demonstration to help “end brutality” before adding, “Black lives matter.”

Romney, a member of the Church of Jesus Christ of Latter-day Saints who has spoken often of his faith, also tweeted out a picture of himself at the Faith Works march below the caption “Black Lives Matter.”

The day before, Romney had tweeted an image of his father, George W. Romney, then governor of Michigan, participating in a civil rights march in the 1960s.

Romney’s office declined to comment regarding his decision to join the demonstration, or if his faith played a role.

Sunday’s march, already in progress for hours before Romney arrived, was called by local D.C. churches that count themselves as theologically conservative.

Last year Platt prayed with President Trump at McLean Bible Church when the president made an impromptu visit, causing the pastor to explain the incident in a letter to the congregation.

Tyler Bowen, who attends Grace Meridian Hill, a church affiliated with the conservative Presbyterian Church in America, said the demonstration was indicative of a more advocacy-oriented strain of evangelicalism that is well represented in the churches that organized the march.

“There is a branch of the evangelical church—like we saw today—that is standing up against these issues, is speaking out, and believes that Jesus is calling them to speak out,” said Bowen. “Speaking out is being faithful to his commandments.”

Participants gathered in southeast Washington before processing toward the US Capitol, singing hymns such as “Amazing Grace” as they walked and holding signs with references to Bible verses such as “Do justice, love mercy, and walk humbly with your God,” from the Book of Micah.

Joshua Little, who attended Sunday’s demonstration and works at the evangelical Christian human rights advocacy group International Justice Mission, estimated that about 2,000 people showed up for the march.

“It represented a unified show of support of churches in the D.C. area marching for justice,” Little told Religion News Service. “We are uniting as Christians to stand up against racial injustice.”

He said that when marchers gathered near the reflecting pool outside the US Capitol to pray, the tenor was more upbeat and less “contentious” than other recent protests that have sprung up following the death of George Floyd, a black man who died begging for breath while a white police officer kneeled on his neck for nearly 9 minutes.

“I felt very glad that there was a protest movement that I could join without being worried that it was going to go in a direction that I wasn’t comfortable with—in terms of violence or in terms of espousing beliefs about the state or the nature of the problems that we face that I fundamentally don’t believe in,” Little said.

Trump’s response to the George Floyd protests have triggered admonishments from evangelical leaders such as Pat Robertson, and Trump’s support among white evangelicals dropped as many as 15 points in recent weeks, according to a poll conducted by the Public Religion Research Institute.

Trump has also faced ample criticism from religious leaders for having his photograph taken in front of St. John’s Episcopal church near the White House while brandishing a Bible, shortly after law enforcement personnel had forcefully cleared the church’s grounds of clergy who had been offering aid to protesters.

However, Little said he heard little to no overt criticism of Trump during Sunday’s demonstration, which was escorted by police and completed its march by walking from the Capitol to the White House.