What if congregations don’t comply with public health orders? We’re about to find out.
Daniel Silliman|March 19, 2020 05:20 PM 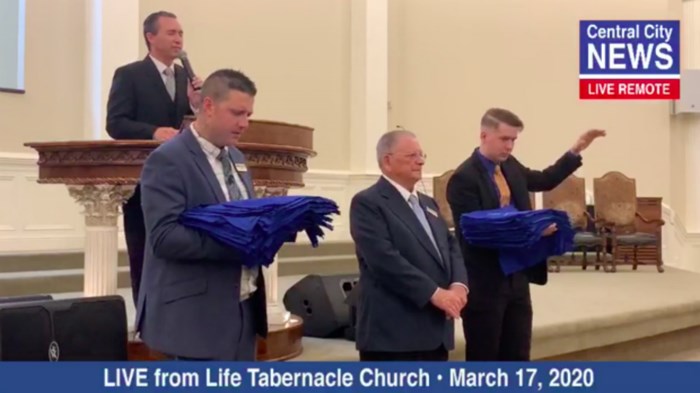 A pastor in Baton Rouge, Louisiana, says he will defy government orders intended to prevent the spread of COVID-19.

The Oneness Pentecostal congregation met on Tuesday, despite the declaration of a state-wide public health emergency banning gatherings of 50 or more people. Life Tabernacle Church plans to meet again on Sunday, setting up a possible legal clash between religious liberty protections and the state’s authority to respond to a pandemic.

“The virus, we believe, is politically motivated,” pastor Tony Spell told CNN affiliate WAFB. “We hold our religious rights dear, and we are going to assemble no matter what someone says.”

The church typically draws more than 1,000 attendees on Sunday. About 300 gathered Tuesday night and the pastor posted a 25-minute clip of the service from Central City News on his Facebook page. Ministers passed out anointed handkerchiefs and Spell preached about fear.

“This is an extreme test brought on us by the spirit of antichrist and the mystery of lawlessness,” he told the congregation. “What good is the church in an hour of peril if the the church craters and caves in to the fears and the spirits of torment in our society?”

Louisiana Governor John Bel Edwards declared the emergency on Tuesday, sharply limiting public and private gatherings of people in the state. Edwards, who is Catholic, is following the recommendations of the Centers for Disease Control and Prevention, which says the impact of the highly infectious coronavirus can be mitigated by reducing social interaction.

“I'm a person of faith,” Edwards said in his public announcement. “I happen to believe very much in the awesome power of prayer. I also believe in science, and the scientists at the CDC say that the measures we are taking will minimize the spread.”

The governor could call the National Guard to force the church to close but hasn’t done so yet. An official spokesman for the National Guard said it has not “been tasked with enforcing any of the curfew, social distancing, or meeting requirements as set by the governor.” A court might also issue an order telling the church not to meet.

“This is a very delicate issue and balance between emergency powers, the First Amendment, and religious rights and freedoms,” Moore said. “We respect the people’s right to meet and practice their religion, but during these dangerous times, some temporary restrictions will prevail.”

Legal experts say that though there are robust protections for religious practice, and constitutional guarantees of the right to worship and even just assemble, states can order churches to close in extraordinary circumstances.

“The government would need to articulate a compelling interest,” wrote John Inazu, professor of law and religion at Washington University in St. Louis, “and its directive would need to be narrowly tailored and executed in the least restrictive means towards accomplishing its interest. That’s a very high standard, and one that’s not usually satisfied. But the government is likely to meet it here.”

“The state’s police powers during declared emergencies can be very comprehensive,” they wrote for Christianity Today’s Church Law & Tax . “The call of the church to provide pastoral care to its members doesn’t change when global pandemics strike. Uncertain times call for church creativity. Churches can rethink and restructure what church looks like to protect their congregations while continuing their ministry work.”

Religious organizations could make a constitutional claim to being singled out by a law that treats secular activity differently, said Eugene Volokh, a University of California Los Angeles Law School professor and First Amendment expert. “But if you’re just imposing the same burden on everybody, for reasons completely unrelated to religiosity of the behavior, that is likely to be permissible.”

When it comes to coronavirus, Volokh said, courts are likely to find “there’s a compelling interest in preventing death through communicable disease.”

For most people, the virus causes mild or moderate symptoms, such as fever and cough, but it can also result in more severe illness and death.

Most churches across the US have moved services online and developed ways to minister while maintaining new practices of social distancing, following President Donald Trump’s declaration of a national state of emergency on Monday.

A Pew Research Center poll found that 63 percent of adults in the US—including 64 percent of white evangelicals, 60 percent of black Protestants, and 66 percent of Catholics—thought the CDC had accurately assessed the coronavirus risk. White evangelicals were more likely than other groups to think the news media had exaggerated the risk of the virus but nonetheless accepted the CDC’s recommendations.

Some Christians have protested, however. R. R. Reno, the editor of the conservative religious magazine First Things, wrote that political leaders might be right to take “stern measures to slow the spread of the virus,” but that churches should not close.

“When we worship, we join the Christian rebellion against the false lordship of the principalities and powers that claim to rule our lives, including sickness and death,” Reno argued. “Closing churches and cancelling services betrays [the] duty of spiritual care.”

In South Korea, one woman exposed more than 9,000 people to the coronavirus by going to church, and may have infected more than 1,000 with COVID-19, according to the Korea Centers for Disease Control and Prevention.

In the US, the coronavirus has spread to all 50 states. In Louisiana, to date, more than 250 people have tested positive for COVID-19 and four have died.