Religion and politics researcher Ryan P. Burge suggests how to make sense of the barrage of polls and results.
Ryan P. Burge|November 2, 2020 11:00 PM 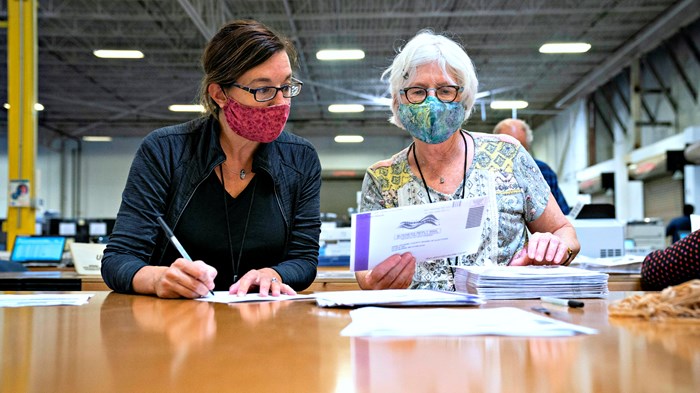 Though Americans have been voting for weeks, the big day is here.

It’s easy to feel overwhelmed with the sheer volume of information about state-level polls, early-voting tallies, outstanding mailed ballots, and the over 200 lawsuits over voting rights. As a political scientist whose research focuses on religion and politics, I dig through polling data every day and sometimes still feel like I don’t know how I am going to process the results.

This election feels particularly precarious after President Donald Trump’s win took many by surprise in 2016. Some are skeptical about the validity of polling; last presidential election, the national polls were just as accurate as they’ve always been, but the state polls were off. This year, news outlets and analysts are being more cautious.

As we gear up for the results, here are five pointers for making sense of the barrage of information that will come out on election night and beyond.

Exit polls, taken outside voting locations throughout the country, are a fixture of Election Day coverage. Poll administrators pull aside a random selection of people as they are leaving and ask basic questions about themselves and how they voted. Those results are quickly tabulated and are then disseminated throughout the evening on the major news networks.

However, they have never been very reliable, and political scientists hardly ever use them for academic journal articles because of a myriad of issues related to the way they are collected and how they ask questions. For instance, these polls often employ an oversimplified question battery related to religious affiliation that can confuse respondents. Additionally, because exit polls are conducted in person, often in earshot of family or friends, people may not be entirely truthful in their responses. Beyond those factors, what makes a traditional exit poll nearly worthless in 2020 is the fact that as many as half the votes cast in this election will not occur on Election Day.

Thankfully, Associated Press joined forces with fellow news networks to scrap using exit polls in the runup to the 2018 midterm elections, relying instead on a traditional polling operation that commences four days before Election Day, called VoteCast. The results from VoteCast will be much more reliable and will likely become the standard going forward, with a growing number of news outlets using VoteCast this year. But if you see results from traditional exit polls, ignore them.

Donald Trump became the president of the United States because of fewer than 80,000 votes across the battleground states of Pennsylvania, Michigan, and Wisconsin. Thus, those three states are absolutely key for a reelection victory in 2020. The polling in Pennsylvania has consistently shown a significant lead for Joe Biden, with many results indicating that Biden may win the state by 7–8 percentage points. As I wrote back in September, white Catholic support will be a key factor and could swing to Biden in the Keystone State.

If the networks call Pennsylvania early on election night for Biden, that’s a very good indication that he will become the 46th president of the United States, since the demographics of Pennsylvania are very similar to that of Wisconsin and Michigan. If Biden is enjoying a significant lead in Pennsylvania at 8 p.m. on Election Day, it’s very likely that he wins the other two states one time zone over, and the Electoral College is all but decided at that point.

But networks are not going to call a state without a great degree of certainty this year. No one wants a repeat of the Florida fiasco in 2000 when it was initially called for Al Gore only to be thrown back in the “too close to call” category a few hours later. The preeminent forecasting site FiveThirtyEight said they wouldn’t make an official announcement until they were 99.5 percent certain of the result.

3. Don’t worry if it takes longer to get results this election.

Early voting and mail-in voting don’t give officials a head start on tabulating votes. Election laws in 34 states prevent them from counting ballots before 7 a.m. on Election Day. By last week, Pennsylvania had received over 1.5 million mail in or absentee ballots, only half of the ballots mailed out, but they remained in locked cages, waiting to get counted on November 3. It’s inevitable that the machines that count the ballots are going to break down.

The other complicating factor is that in some states a mail-in ballot must only be postmarked by Election Day in order to count. For instance, in North Carolina (a possible swing state) ballots need only be received up to three days after the election in order to be counted. In the proverbial bellwether of Ohio, it’s ten days after Election Day. Though there is no systematic evidence that voting by mail, voting absentee, or using drop boxes increases the likelihood of a fraudulent outcome, the Trump campaign filed a federal lawsuit regarding voter fraud in Pennsylvania earlier last month. When the campaign was unable to produce any clear evidence, the judge dismissed the case.

4. Don’t expect to really know how religious groups voted until the middle of 2021.

As previously mentioned, exit polls are going to be even more inaccurate this year than they have been in previous election cycles. Thus, any results that we see on November 3 regarding religious groups are going to come from just a handful of data sources, who will likely never release raw data files to the general public. Thus, it won’t be possible to crosscheck results released by these polling firms against established methods of classifying religion.

The reality is that the Election Day breakdowns will likely be good ballpark estimates but may not be exactly correct. For instance, analysis released the day after the election indicated that 81 percent of self-identified white evangelicals voted for Donald Trump. Data from larger academic surveys, which break down religious groups by church tradition, indicated it was closer to 77 percent of white evangelicals (similar to support for previous Republican candidates).

For reference, here are the results from the Cooperative Congressional Election Study, which was conducted in November 2016. 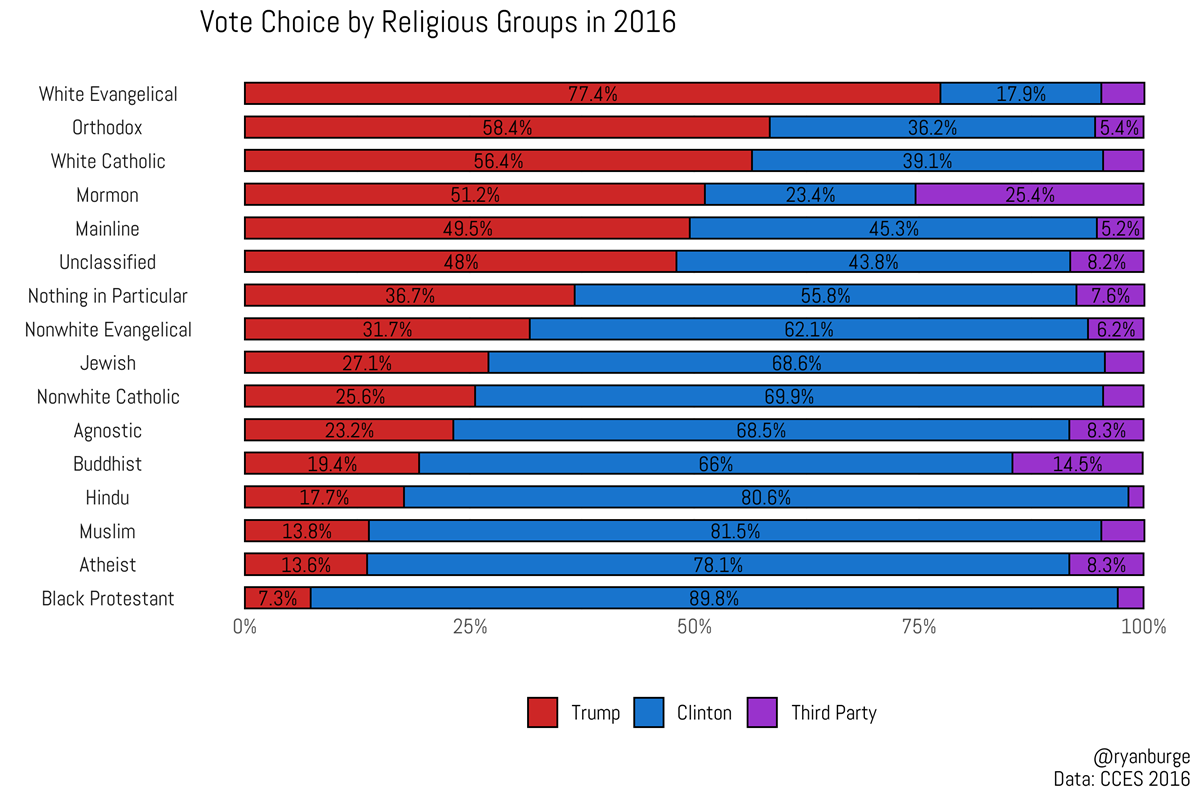 White Catholics, not white evangelicals, may be the most important voting bloc in the 2020 presidential election. In 2016, 56 percent of them voted for Donald Trump, but if the focus is just on the major party candidates, Catholics gave 59 percent of their votes to Donald Trump and just 41 percent to Hillary Clinton. Third-party candidates will play a much smaller role in this election cycle, which could bring the white Catholic vote closer to a 50-50 split among Joe Biden and Donald Trump.

However, what may boost Trump’s chances of winning reelection is the Hispanic Catholic and Hispanic evangelical vote. Several polls have emerged that indicate that the president is receiving more support from the Hispanic community in 2020 than he enjoyed in 2016. While the Hispanic community in the United States is smaller than the share who are white Catholics, they are located in some key states like Texas and Georgia that are tossups in the 2020 contest and could swing the results in the GOP’s favor.

It’s fair to say that we’ve never had an election quite like the one that will occur on November 3, 2020. Grab an extra helping of snacks, muster as much patience as you can, say a prayer or two for our country, and be willing to accept the possibility that you may not go to bed tonight knowing who the winner of the race is going to be.