Christian Trump and Biden Voters Wait on the Lord ... and Ballot Counts

Without a clear victory, Americans keep praying for candidates and the country.
Kate Shellnutt and Daniel Silliman|November 4, 2020 12:29 AM 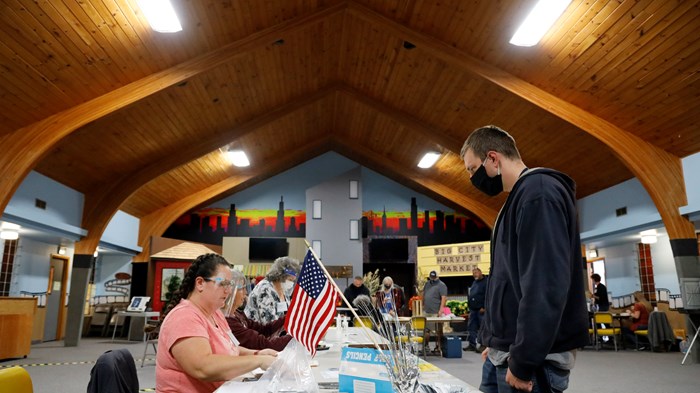 Blessed are those who wait on the battleground states.

Evangelicals have joined the rest of the United States praying and anticipating the results of the race between President Donald Trump and Democratic challenger Joe Biden after election night came and went without a definitive winner.

Each told supporters they were confident of their chances in critical states that needed more time to finish counting votes: Pennsylvania, Michigan, and Wisconsin.

Trump told a crowd at his campaign headquarters that he was ahead in the undeclared states and claimed that “we will win this, and as far as I’m concerned we already have won this,” though the races in several states had not yet been called.

At an event in Delaware, Biden said to “keep the faith” while votes were still being tallied late into the night—and may continue to be counted for days to come. “We’re going to have to be patient,” the former vice president said. “And it ain’t over until every ballot is counted.”

Biden went into the night with a substantial lead in the national polls, but Trump did better than expected in Florida and maintained an edge in Georgia and North Carolina. Among white evangelical and born-again Christians, he earned 78 percent of the vote, according to the first 110,000 voters surveyed by the Associated Press for its VoteCast poll. Trump garnered several percentage points more in key Southern states.

With the unusual difficulties of this year, an ongoing pandemic and social unrest, the election delay can feel like a particularly cruel limbo. After a prolonged early voting season and record-high turnout, enthusiastic supporters on both sides are holding on to hope that their candidate will win.

“I am so optimistic,” Delaware Senator Chris Coons said in a prayer call Monday for the Biden campaign, “but in everything we work and pray for, we need to submit ourselves to our Lord and Savior and whatever is the outcome.”

Coons, a lifelong Presbyterian who has spoken up about the former vice president’s faith, called the election a “kairos moment” when “the arc of history may well turn to justice,” but also told supporters that if the outcome goes the other way, they must be prepared to “accept the judgment of our Lord and our nation.”

Dozens of evangelical pastors and worship leaders lifted up the president on the day before the election and specifically prayed that Christians would vote their values.

“We thank you for a president who has embraced you, embraced people of faith,” said Jack Graham, pastor of Prestonwood Baptist Church. “Lord, we ask in Jesus’ name that you will give us victory, a victory that will resound to the ends of the earth.”

“We have seen you move in the past…,” he said, “and now we are believing and trusting in you O God to do it again.”

Despite Trump’s notoriously brash personality, “I haven’t seen anything the president has done in the last four years that has dissuaded evangelicals that he isn’t their man: his judicial appointments, his executive orders pertaining to religious freedom, the positions of his justice department in key issues,” said Biola University political science professor Scott Waller.

Evangelical support may not help Trump in Pennsylvania, however. Mainline Protestants and white Catholics both make up larger portions of the electorate, and Catholics appear to be the critical swing vote. In a late October poll, just 37 percent of white Catholics approved of Trump’s job performance, and only about one-third said he’d done a good job handling the coronavirus.

The majority of white evangelicals in the state were leaning the other way: Seventy-five percent said the president cares about people like them and 65 percent said they strongly approved of his job performance.

Evangelicals also make up a smaller percentage of the electorate in the yet-to-be-called midwestern states of Michigan and Wisconsin.

The undecided election puts pressure on evangelical leaders who—sensing the strain of increasing partisanship in their congregations—have preached a message of Christian unity, pluralism, and a gospel that transcends earthly divisions.

With the country split over its next president and awaiting the results of a tight election, political scientists say now’s the time to put those ideals into action.

“Trust in our political system and each other is the defining political issue and cultural issue for our time,” said Amy Edmonds, political science professor at Milligan University. “That is something all of us can try to help remedy. Civil society like churches can make a huge difference. We can learn to dialogue, to listen to people who we disagree with, and love our neighbor despite differences.”

Edmonds said if the election results turn contentious, or even if the country sees incidents of violence, it will be important for Americans to uphold a sense of trust in one another and in common decency. This election, the US has faced threats of foreign forces trying to sow discord in the election process and exploit growing ideological divides.

The 2020 race has been compared to the contest 20 years ago, when voters had to wait until December 13 to know the presidential outcome.

“I lived in Florida in the year 2000, and the anxiety only grew as the days went on, and I would expect something even worse this time given that the partisan divides represent something akin to the Grand Canyon compared to a creek, 2020 to 2000,” said Waller at Biola. “There were certainly partisan divides between Bush and Gore, but the divides between Biden and Trump are exponentially higher.”

In his remarks in the early hours of Wednesday morning, President Trump called the delayed counts a fraud and an embarassment, threatening a legal challenge.

As Christians rallied to pray on Election Day, in Zoom calls, text threads, and church gatherings, they prayed for protection against any forces—spiritual or earthly—that would use the election to divide the country.

The church—in its own already-but-not-yet existence waiting for the true kingdom—is particularly well positioned for this moment, leaders say. Many churches continue to gather Americans of differing political persuasions under the banner of Christ. White evangelicals voting for Biden, for example, are more likely than any other demographic to have close friends on the other side of the aisle.

And Christians’ trust in God’s sovereignty and his ultimate rule should free them up for more honest, humble dialogue with those who disagree. “Regardless of our circumstances, we can engage in this messy and uncertain world because we trust that God is in control,” wrote law professor John Inazu, author of the book Confident Pluralism. “Because of our confidence in the gospel, Christians should see not only the challenges of pluralism but also its opportunities.”

Both presidential candidates made faith a major part of their campaign strategy this year. Trump continued to appeal to conservative Christians with Evangelicals for Trump events that enlisted local pastors and members of his evangelical advisory board.

“Whoever wins the presidential race will face the daunting task of leading a deeply divided country in the midst of a growing pandemic and serious economic disruption,” said Amy Black, who teaches political science at Wheaton College. “I hope and pray the person inaugurated on January 20 will do everything in his power to bring people together, instill hope, and guide us out of the pandemic.”

Christian Trump and Biden Voters Wait on the Lord ... and Ballot Counts

Christian Trump and Biden Voters Wait on the Lord ...