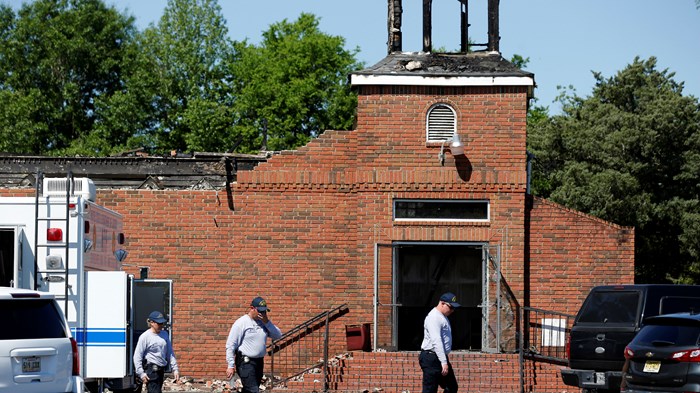 A Louisiana man who admitted to burning down three predominantly African American churches to promote himself as a “black metal” musician was sentenced Monday to 25 years in prison and ordered to pay the churches $2.6 million.

“Matthews admitted to setting the fires because of the religious character of these buildings, in an effort to raise his profile as a ‘Black Metal’ musician by copying similar crimes committed in Norway in the 1990s,” the statement said.

Matthews had shown interest in “black metal,” an extreme subgenre of heavy metal, according to authorities. The music has been linked, in some instances, to fires at Christian churches in Norway.

Matthews told the judge, pastors and congregations of the three Baptist churches that he was deeply sorry and wanted them to know he had recovered his faith in God, The Advocate reported.

He had pleaded guilty to both state and federal charges. Summerhays said that when Matthews is sentenced in state court, that judge may order the sentence to be served at the same time as the federal one.

Matthews pleaded guilty in federal court to three counts of violating the Church Arson Prevention Act and to one of using fire to commit a federal felony.

All three were burned down over 10 days in March and April of 2019. The churches were empty at the time of the fires, and no one was injured.

Although race was not considered a motive, Summerhays said, he had to consider that the crime brought the church communities back to a dark time of racial discrimination, the newspaper reported.

“These churches trace their origins to the post-Civil War Reconstruction period and, for generations, were a place for predominantly African American Christians to gather, pray, worship, and celebrate their faith,” Assistant Attorney General Eric Dreiband of the Civil Rights Division, said in the news release. “The churches survived for nearly 150 years but did not survive this defendant’s warped act of hatred.”

The judge asked the Bureau of Prisons to put Matthews in a prison near his family and to ensure that he gets substance abuse counseling and mental health treatment, KATC-TV reported.