Patriarch Irinej of the Serbian Orthodox Church died after attending funeral of Montenegro counterpart who also had COVID-19.
Mladen Aleksic and The Associated Press|November 25, 2020 12:11 PM 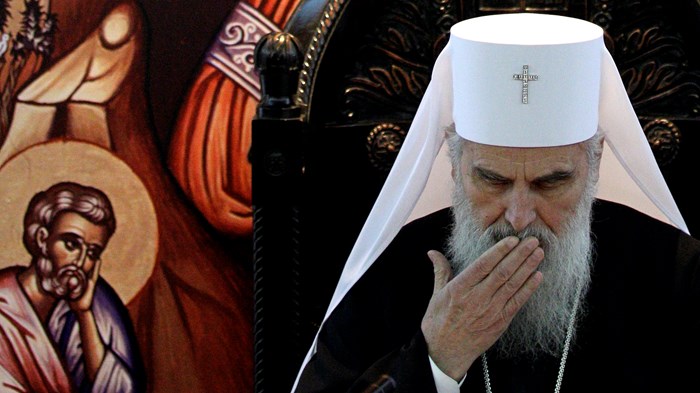 Church bells tolled and mourners flocked to light candles as the Serbian government proclaimed three days of national mourning for Patriarch Irinej. The 90-year-old leader of the Serbian Orthodox Church, who passed away November 20, became the world’s highest-ranking cleric to die from COVID-19.

Evangelical leaders in Serbia described him as kind and sincere in his dialogue with them.

The Orthodox lost a towering figure, who nurtured the church through the Soviet era.

“I knew the patriarch as a simple man, modest in his needs, and of strong moral character,” said Zoran Filipovic, an Orthodox priest who served on his staff.

“His greatest concern was the welfare of the church.”

It may have contributed to his death.

The patriarch was hospitalized with the coronavirus early in November, soon after attending the funeral of the head of the Serbian Orthodox Church in Montenegro, Bishop Amfilohije [profiled by CT], who also died from complications caused by COVID-19.

Thousands of mourners, most of them without masks, gathered at the November 1 funeral for Amfilohije in the Montenegrin capital, Podgorica, in violation of pandemic-fighting measures proclaimed by the small Adriatic state’s authorities. The burial turned out to be a superspreader event, with several high-ranking church officials and other attendees later testing positive.

After Amfilohije’s death and Irinej’s hospitalization, Serbian priests have started to appeal for their parishioners to take the deadly virus seriously. They had previously downplayed the threat from the global pandemic and largely ignored bans on large gatherings and preventive measures during prayers and other church services.

Irinej was buried in the main Saint Sava Church in Belgrade on Sunday, the first Serbian patriarch to be interred. Hundreds gathered to commemorate him, with masks and social distancing much more prevalent.

The location was symbolic.

“The completion of Saint Sava Cathedral will go down in history as one of the greatest achievements of his patriarchal service,” said Metropolitan Hilarion of the Russian Orthodox Church, during the funeral speech.

“Filled with true Christian love, and not sparing strength, he always tried to be with his people.”

With architecture and grandeur designed to imitate the Hagia Sophia in Istanbul, Saint Sava is one of the largest Orthodox cathedrals in the world. The cornerstone was laid in 1935; however, after World War II, communist officials in then-Yugoslavia prevented its completion. Its dome was raised in 1989, and Irinej presided over the mosaic installations in 2017.

“Saint Sava will be the new Saint Sophia,” Irinej said with Serbian president Aleksandar Vucic, following Turkey’s reconversion of the Istanbul church-museum into a mosque.

“The temple of Saint Sava will be a magnificent shrine to the pride of the Serbian people, but also to the entire Christian world.”

Following the news of Irinej’s death, Vucic posted on Instagram: “It was an honor to have known you,” alongside a black and white photo of the patriarch. “People like you are never gone.”

And Russian President Vladimir Putin sent a message of condolence, praising the late patriarch for “strengthening the unity of the whole Orthodox world,” according to Serbia’s state TV.

Irinej, who wielded considerable political influence in Serbia, took over the church’s helm in January 2010 after the death of his predecessor, Patriarch Pavle, who was a highly popular and respected church leader in the Balkan country.

At the time, Irinej was seen as a relative moderate and a compromise choice among the factions within the church.

But he continued the Orthodox political theology of symphonia, in which the church and state complement each other in mutual respect, without one dominating the other.

The theory traces back to the fourth-century Roman Emperor Constantine. In 2013, Irinej hosted eight Orthodox patriarchs to honor the 1,700-year anniversary of the Edict of Milan, which established religious tolerance for Christianity.

It was held in Nis, the place of Constantine’s birth, where Irinej served as bishop for 35 years.

Throughout his leadership, Irinej maintained the nationalist stance the Serbian church developed during the wars that cleaved the Balkans in the 1990s. That included beliefs that the Serbs were historic victims of injustice and played on alleged anti-Serb policies in rival Balkan nations as well as the international community.

He often criticized Western policies toward Serbia over its breakaway Kosovo province, which unilaterally declared independence in 2008. He kept close relations with the Russian Orthodox Church, and the populist Serbian president.

Irinej spoke strongly against abortion and homosexuality, but expressed an inclination to join the European Union—if it could accept Serbian culture and religion.

“Our biggest problem is not our centuries-old neighbors,” Irinej said, “but ‘developed’ Europe and the West in general.”

But he was also among the rare Serbian church dignitaries who openly called for improved ties with the Roman Catholic Church. He said the two churches should overcome historic differences.

“Humble and joyful, totally dedicating his life to God and fostering the spirit of communion within the Serbian Orthodox Church.”

The people responded to his leadership.

In 1959, then-Miroslav Gavrilović took his monastic vows. At that time, 13 percent of the Yugoslav population in territorial Serbia identified as atheist or agnostic. And the 72 percent Orthodox population was riddled with superstition and spiritualist folk practices.

Appointed rector of the Prizren Seminary in 1969, Irinej made Christian education of the priests a priority, which continued through his service as bishop.

“He discouraged the youth from frivolous fantasies, instructing them in their duties towards family, church, and society,” said Filipovic, who served on his diocesan staff in Nis.

“Promoting faith and moral values, Irinej led a mass return to the church.”

According to the last census in 2011, only 1 percent of Serbians now identify as atheist or agnostic, compared to 85 percent Orthodox.

“I don’t have my own program,” said Irinej, during his 2010 enthronement speech, in contrast to previous patriarchal practice.

“Only the gospel, in which the Lord says, ‘Go and preach.’”

During his funeral, the 1 percent Protestant community joined the Orthodox in the nationwide ringing of bells.

Primarily consisting of ethnic Slovaks, most Serbs view evangelicals as a “sect,” said Cedo Ralevic, president of the Union of Christian Baptist Churches, who pastors a church in Nis.

But Irinej was different, he said. They once spent two and a half hours meeting together, ending with a sense of “mutual appreciation.”

At one official event, Irinej had him sit down next to him, in preference over the many Orthodox clergy.

“He was very kind to me,” said the bishop of the Slovak Evangelical Church, Augsburg Confession. “The dialogue he advocated he also zealously followed, all the days of his life.”

And it is this heritage, rather than the COVID-19 diagnosis, that the Serbian faithful will remember of their patriarch.

“The patriarch sought to open our hearts together, to the Lord Jesus Christ.”

Mladen Aleksic is a Serbia-based journalist. Additional reporting by Dusan Stojanovic of the Associated Press.