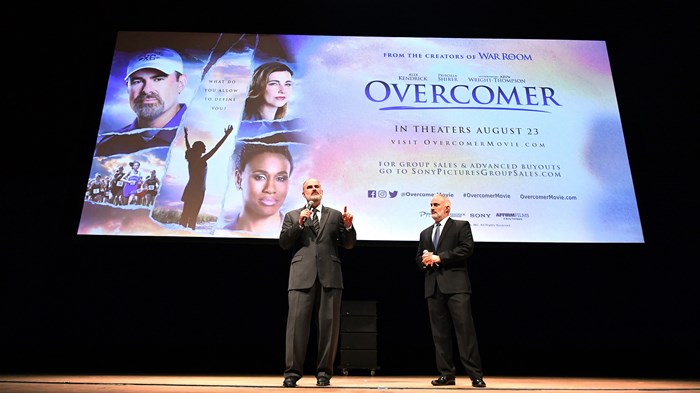 In a shakeup of the niche faith-based streaming market, Sony Pictures plans to acquire streaming service Pure Flix and its hundreds of thousands of subscribers committed to “clean entertainment” and “feel-good movies.”

Affirm already has a strong track record of what executives call “uplifting, inspirational content,” with popular titles aimed at Christian audiences: Miracles from Heaven starring Jennifer Garner, War Room from filmmaker brothers Alex and Stephen Kendrick, and The Star, an animated re-telling of the Nativity co-produced by DeVon Franklin and The Jim Henson Company.

Keith Le Goy, president of networks and distribution at Sony, said the acquisition allows Affirm to create and share more stories that are “both impactful and entertaining.”

Pure Flix CEO Michael Scott and chief content officer David A. R. White—who has starred in many Pure Flix releases himself—said they plan to stay on board, joining Affirm Entertainment after the deal is done to manage the service and help develop future programming. However, the independent studio Pure Flix Entertainment will remain a separate entity and retain its library of films—notably its God’s Not Dead trilogy, which collectively earned $96 million at the box office.

This move by a major studio reveals the value Hollywood places on reaching Christian consumers, particularly as most entertainment has been moving to in home and on demand.

“The shift to streaming has been a long time coming, with the pandemic accelerating it,” said Erik Lokkesmoe, president of Nashville-based Aspiration Entertainment. “But there’s not a clear path on how to find an audience. Most players in the market are still feeling their way up the staircase in the dark.”

By contrast, Pure Flix reported 350,000 subscribers last December, and has since stated their streaming service has seen a “40 percent increase in membership” this past spring. (Pure Flix and Sony Pictures did not respond to requests for comment.)

Despite current subscribers being a fraction of top streamers, one industry insider noted a relevant marketing adage: Riches are in the niches.

“As audiences fragment, we see tremendous opportunities,” said Lokkesmoe, distributes films and has promoted such hits as Won’t You Be My Neighbor?, The Peanut Butter Falcon, and Dark Waters to the faith market. “Streaming has become a great option. Families can enjoy many movies early, at a price point where it’s cheaper than movie theaters.”

“Today, more Christians are watching Netflix and Disney+ than any self-described ‘faith-based streaming service,’” said Lokkesmoe. “But there’s no better leader than Sony Affirm led by Rich Peluso to try to compete. They have the credibility and size to be taken seriously by everyone: trade publications, industry producers, and the audience.”

Sony’s acquisition of Pure Flix streaming marks the first major studio attempt to create a must-see destination for faith content. Its dozens of Christian-themed films, including the Kendrick Brothers’ conversion-oriented movies, will be merged with the Pure Flix library, which recently added season 1 of VidAngel’s acclaimed Gospel adaptation The Chosen. (Crowdfunded by over 20,000 backers who have raised $20 million to date, the production outshines other titles on the Pure Flix app.)

But the varied filmography of Sony’s Affirm label, helmed by executive vice president Peluso since its founding, encapsulates decades of hits and misses in reaching Christian consumers. It also shows how retaining talent has proven a challenge.

After several Sony blockbusters, including Heaven is for Real, which earned $101 million worldwide, producer DeVon Franklin decamped to rival studio Paramount. Affirm released the Erwin Brothers comedy Moms’ Night Out in 2014, but missed out on their $86 million windfall I Can Only Imagine, which released in 2018 through Lionsgate instead. That studio has since inked the filmmaker brothers to a multi-year deal.

With films targeting Christian audiences ranging from the evangelistic furor of God’s Not Dead to avant-garde faith-conscious films like Martin Scorsese’s Silence and Terrence Malick’s The Tree of Life, Sony will have to define the brand of the Pure Flix service and its expanded offerings.

“Figuring out what their faith film library is about will be a good challenge,” said Lokkesmoe. “Is it inspiring stories? Is it the good, true, and beautiful? Or is it an absence of sex, violence, and explicit language? Or just what appeals to conservative white evangelicals?”

With the skepticism of an insider, he added: “My fear is [their approach] may miss out on honest, authentic storytelling that wrestles with the dark, broken world we actually live in.”

Currently, for $12.99 a month, Pure Flix invites viewers to “have faith in their entertainment.” Its most-watched titles include The Chosen; The Case for Christ, about skeptical journalist-turned-biblical-apologist Lee Strobel; and Palau, a biopic on the famous evangelist.

Josh M. Shepherd covers culture, faith, and public policy issues for media outlets including The Stream and The Federalist.