As Abiy’s military closes in on TPLF forces, thousands flee to Sudan.
Jack Bryan in Addis Ababa|November 25, 2020 01:03 AM 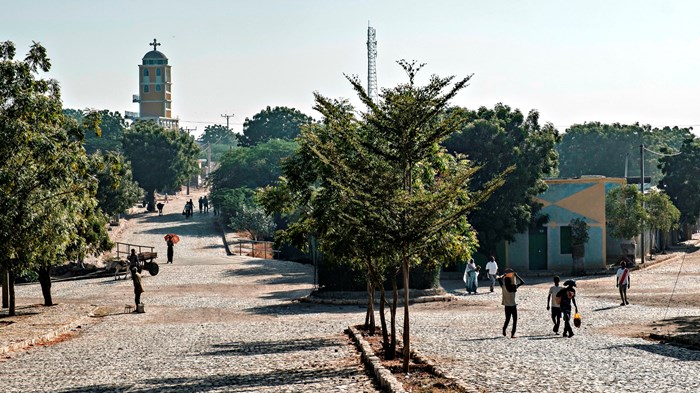 Image: Eduardo Soteras / AFP / Getty Images
The streets of Humera in the Tigray region of Ethiopia on Sunday, November 22.

The jagged rock spires and steep mountains of the Tigray region in northern Ethiopia are home to some of the oldest churches in the world.

Against that historic backdrop, forces loyal to the central government in Addis Ababa have pushed toward the regional capital, Mekele, fighting soldiers loyal to the Tigrayan People’s Liberation Front (TPLF).

Fierce fighting has raged since November 4, when Ethiopians awoke to see Prime Minister Abiy Ahmed announce that he had sent federal troops to Tigray in response to an attack on the Northern Command Post of the National Defense Force in the region. The once-dominant TPLF, whose relations with the central government had been souring for months, had attacked federal troops.

“The last red line has been crossed with this morning’s attacks and the federal government is therefore forced into a military confrontation,” Abiy said.

All internet and telecommunications have been shut off in Tigray since then, making information difficult to verify. The Ethiopian government says it is making advances that include the capture of the ancient city of Axum, where the church of Our Lady Mary of Zion is believed by the Ethiopian Orthodox Tewahedo Church to host the original Ark of the Covenant.

As they retreated, TPLF forces damaged the Axum airport and destroyed bridges leading into Mekele.

“There was a lot of confusion,” a Christian expat working in the Tigray town of Shire, near the border with Eritrea, told CT. Evacuated by the United Nations last week, he asked to remain anonymous in order to protect his work there. “That first day was the worst, because people were killed, shot, and beat. We heard soldiers trying to hide in homes, and other soldiers trying to find them.”

“Soldiers in our church were killed,” he said. Though the Tigray region is 95 percent Orthodox, many of the federal troops stationed there are from other regions of Ethiopia where Protestantism is more common. “One deacon was captured and imprisoned, and two other [members] were killed because they were in the airport defense.”

He was saddened by the response in his church. “There wasn’t recognition of the individuals who had died. … It was ‘the outsiders,’” he said. “That is where it hits us as believers. These are our brothers.”

Initially, the TPLF denied the attack, and many international news sources have condemned Abiy’s “aggression” and called for peace. However, on November 14,senior TPLF member Sekuture Getachew made a statement on TPLF official satellite television channel Dimtsi Woyane (Voice of the Revolution), in which he stated: “Should we be waiting for them to attack? No, it was imperative to take a thunder-like strike.”

“From what we could gather on the ground, there were orchestrated efforts across Tigray at the same time to attack the Federal Defense Force,” said the Shire-based Christian worker.

“The next day, there were people parading through the streets, celebrating victory and the capture of federal soldiers,” he said. “And parading artillery that they had captured.”

After the conflict started, there was a partisan attitude in the church. “It was almost like, ‘We’re doing it, we are winning.’ And that saddened us,” he said.

Sekuture compared Tigray to “Israel surrounded by big Arab nations … preparing to attack it.” The TPLF has felt increasingly threatened since Abiy brokered peace with neighboring Eritrea, a conciliatory move that was awarded the Nobel Peace Prize in 2019.

Though Tigray composes only 6 percent of Ethiopia’s population, the TPLF has dominated the political landscape since 1991. It was the TPLF-controlled government that fought a border war with Eritrea from 1998 to 2000 in which an estimated 80,000 people were killed. The TPLF has resisted Abiy’s peace by refusing to demilitarize the border it controls.

The determination of Abiy, a devout Pentecostal, to introduce political reforms has increasingly pushed TPLF elites out of power. Over the last two years, many TPLF leaders have been arrested or have fled north to Tigray after being charged with crimes ranging from attempted assassination, incitement of ethnic violence, and embezzlement of government funds. The TPLF refused to join Abiy’s unitary Ethiopian Prosperity Party after the dissolution of the ruling coalition, the Ethiopian Peoples’ Revolutionary Democratic Front, in November 2019.

Since then, the TPLF has worked on consolidating support in its region. Many observers have pointed to Tigray’s regional elections in June as the point of no return.

“The hard line became visible when TPLF decided to conduct a regional election on its own, defying the decision made at the national level,” said Shimels Sisay, a former professor of human rights currently working on Ethiopia’s elections. “Each was accusing the other of being unconstitutional and illegitimate.”

“The central government branded that as a mock election, which Tigray called a declaration of war,” he said. “As a result of this, we are where we are today.”

After the initial attack, loudspeakers announced a rally in the Shire stadium and trucks began rounding up the young men.

“There were some classes going on at the Bible School … they were totally disrupted because the local people did not want to be in a place where they could be found,” said the Shire worker. “They were afraid of conscription.”

Likewise, many of his non-Tigrayan friends and church members fled into the countryside when the fighting began, fearing being targeted on the basis of their ethnicity.

“What we saw is that ethnic identity is much stronger than religious identity, whether you’re Muslim, Orthodox, or Protestant,” he said.

Many organizations have predicted a humanitarian disaster will follow the conflict. According to the UN, 4,000 refugees a day are fleeing across the border to Sudan, where already 30,000 displaced people have gathered.

“As soon as there is the ability to respond, we will,” said Edward Brown, national director of World Vision Ethiopia, which has a large presence across the nation—including 82 staff in Tigray. “We are assuming we are going to have a massive scale-up [of operations in Tigray].”

The cause of the conflict is “part of the broader global narrative around identity and the tribalization of politics,” he said. “But here, it is not just winning or losing an election. It’s life or death: access to land, access to food … the stakes are so high.”

Even before the conflict, over 1 million people in Tigray were in need of daily food assistance, including 40,000 Eritrean refugees. This year has already been marked by a locust plague worse than any in living memory, and the current conflict will interrupt harvests across Tigray.

“On the Monday after it blew up, we started to see the people coming into town with their bags,” said the Shire worker. “Displaced women and children, standing on street corners. Many went to Sudan.”

It is clear to many that the church must be a part of moving Ethiopia forward after this conflict.

“A priest protects the Ark of the Covenant in Axum,” said Brown. “In Ethiopian, covenant (kalkidan) is a compound word meaning ‘promised word,’ based on the biblical, relational understanding: ‘I will be Your God and you will be my people.’”

“There has to be a covenant to keep Ethiopia together. That is much deeper than a negotiation or contract agreement that says, ‘You do this and I’ll do that.’ A covenant is a mutual commitment to relationship with one another,” he said.

“God’s at work [in Tigray], but it’s going to take a church that can rise above all this,” said the Shire worker. “That’s our prayer for the church in this time: How are they going to be the body of Christ there, in the midst of such volatile political and ethnic tensions?”

Correction: An earlier headline described the divide along “tribal lines.” In Ethiopia, ethnic groups are composed of multiple tribes.