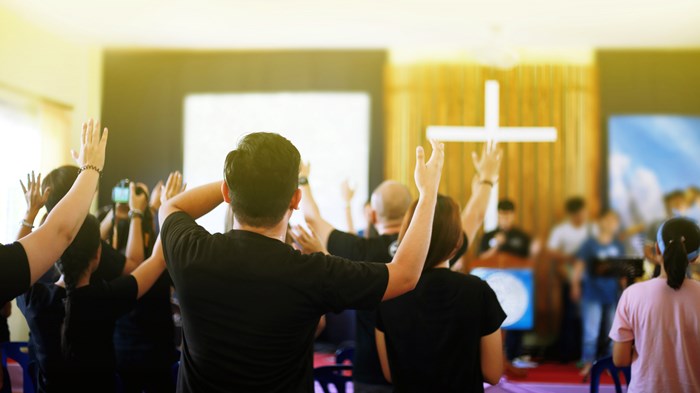 Pastor Tina Teng-Henson, who co-leads a small, primarily Asian American church in the San Francisco Bay Area, recently preached about Jesus’ teachings on family from Luke 8. “My mother and brothers are those who hear God’s word and put it into practice,” Jesus says (v. 21).

Her reason for choosing this passage? “This is a really hard time for a lot of families,” she told me. “There’s a lot of stress and tension.”

We’re in the midst of a global pandemic, of course, but a significant amount of that stress relates to the presidential election, which has split Asian Americans along generational and cultural lines.

In Teng-Henson’s own family of devout Christians, there are Biden supporters and Trump supporters. Her Taiwanese-born parents believe Trump will better stand up to China’s aggression toward Taiwan; another family member is a devoted supporter of QAnon and Trump.

Teng-Henson herself was raised Republican but has moved politically left as an adult. “In the last 20 years I’ve become convinced that Democratic values that allow for personal decision making and support giving people the greatest political freedoms and opportunities to experience the generosity of our government are important,” she told me. “That leads me to support Democrats.”

Asian Americans are often overlooked by political parties, pundits, and researchers, despite being one of the fastest-growing racial demographics within the American electorate. The number of eligible Asian American voters grew by 139 percent between 2000 and 2020, driven in large part by naturalization. This year, 4.7 percent of the American electorate will be ethnically Asian, the highest ever.

Asian Americans cannot, however, be considered a monolith. They identify with ethnic groups from more than 20 different countries of origin in East and Southeast Asia and the Indian subcontinent. They are vastly diverse in faith and culture and background, and how they vote is no exception. Most Indian Americans, for example, tend to vote Democratic; Vietnamese Americans are more consistently Republican.

The largest single ethnic group within the Asian American population is Chinese Americans, who in 2015 numbered 4.9 million and made up 24 percent of Asian Americans. More than 1 million of them identify as Protestant, with another 400,000 identifying as Catholic. This year, they are also the Asian ethnic group with the largest proportion of undecided voters in the presidential election: a rather stunning 23 percent, compared to the typical 5 to 11 percent rate of undecided voters found in the general electorate.

One reason for that statistic may be that most recent Chinese immigrants come from mainland China, unlike previous generations that moved from more democratically inclined Hong Kong and Taiwan.

“With first-generation immigrants, a lot of the people I know, like my parents, don’t feel particularly politically engaged,” explains Christian author Liuan Huska, who migrated to the United States from southern China when she was three. “That comes from our history from a country where they had very little political voice. They carry that lack of agency into this country. They’re mostly concerned about survival and doing well for themselves.”

Wing So, a radio host who was a longtime pastor at an Evangelical Free Chinese congregation in San Francisco Chinatown, believes that cultural and linguistic differences also keep some Chinese naturalized citizens from voting. Some first-generation immigrants “are very indifferent to politics,” he said. “They don’t speak English. They don’t understand mainstream America at all.”

Historically, Asian Americans—and Chinese Americans in particular—have participated in elections at lower rates than every ethnic demographic except for Latinos. But the consensus seems to be that this presidential election is no ordinary election, and the level of political engagement is growing. Of more than a dozen Christians interviewed for this article, every one, no matter his or her political persuasion, had already voted or made plans to vote early.

Many of the issues at stake in this presidential election hit close to home for Chinese Americans. The ongoing trade war and escalating cold war with China, the anti-Asian sentiment that has grown alongside COVID-19, the Trump administration’s strong anti-immigrant stance, and the protests around systemic racism have all made national politics far more personal.

How Chinese American Christians interpret these issues, which ones they prioritize, and which presidential candidate they feel led to support seem to be influenced by a broad array of identity markers: family history, age, country of origin, denomination, geographical region, education, cultural identification, and economic status, among others.

To several Chinese Americans I interviewed, the George Floyd protests, for example, are a tangible example of the gospel-driven call for justice and equity, especially if they studied social science or attend multiethnic churches. To others, who are primarily older, first-generation immigrants, the “lawlessness,” as one put it, is a threat to scriptural exhortations for peace and respect toward governmental authorities.

Similarly, there is not one stance on US relations with China. Immigrants from Hong Kong and Taiwan, as well as those who fled persecution in China, tend to be strongly anti-Communist and pro-Trump. Other immigrants from China, whether because of an affinity toward their country of origin or personal or professional ties, see Biden as the better candidate to restore US-Sino relations. “If you are pro-Chinese regime, then probably you will vote against Trump. If you are against Chinese communism, then you will vote for Trump,” explained So.

But that dichotomy doesn’t hold true for all Chinese American Christians. Seattle-based biblical scholar and Hong Kong native Sam Tsang calls it a “myth.” He is far more concerned about authoritarianism here, not abroad. “Trump seems to stand for a lot of authoritarian ideals from which Hong Kong and Taiwan were hoping to be saved,” he wrote in an email interview.

And plenty of Chinese American voters aren’t thinking about China at all. The political priorities of Sau-Wing Lam, a Hong Kong–born Christian who leads a financial stewardship ministry with nationwide reach, are much more in line with those of conservative white evangelicals.

Lam sent me a list of what he considers Trump’s greatest accomplishments to support his belief that Christians must vote for the president: “opposing abortion (he is the first president to participate in the annual Walk For Life), removing barriers (the Johnson Amendment) for pastors to speak on the pulpit, honoring and protecting Israel, removing Obama’s threat to schools regarding accommodation of transgender students, bringing back prayer meetings and Bible studies into the White House, appointing conservative and Christian judges to both the Supreme Court and the lower courts, etc.”

Lam and others like him follow pro-Trump Chinese pastors and speakers online but also listen closely to conservative evangelical leaders like former Liberty University president Jerry Falwell Jr. and Focus on the Family founder James Dobson.

Ken Fong, a Baptist pastor for four decades and host of the podcast Asian America, believes such close political alignment to white evangelicals is no coincidence and stems from the long history of Western missionaries in East Asia and the lingering, perhaps unconscious belief in the superiority of Western theology and culture among some Chinese.

“Much of the immigrant Chinese Christians are so bought into the Western imperialist colonialist mentality that underneath that is a hatred of their own Chinese-ness,” he told me. Supporting Trump can be a sign of “passing as white. ... This is what it means to be a conservative American, to stand with this guy.”

But the children, grandchildren, and great-grandchildren of Chinese immigrants (called second, third, fourth generation, and so on) tend to see themselves and their place in American society very differently.

Fong’s own young adult daughter, for example, a fourth-generation Asian American, is “way ahead of where I was when I was 21 in terms of cultural identity and self-love. Her world is so populated beyond the borders and boundaries that we grew up with. She is much more down with who she is. The more she embraces the person that God made her to be, the more she can contribute to the needs of the greater good.” As a result, her political concerns, and those of many of her peers, are starkly different from that of their forebears.

Every second-plus-generation Chinese American interviewed for this article was voting for Biden, and their top issues—climate change, gender and racial equality, immigration, and the pandemic—had almost no overlap with that of first-generation immigrants. Their view of the gospel often extended beyond personal piety and single issues.

Justin Fung, a pastor in a multiethnic church in Washington, DC, was born to naturalized US citizens in Hong Kong and moved to the US as a young adult.

“As a Christian, I believe that I am called to a consistent ethic of life, from womb to tomb,” he explained to me. “I don’t believe in being defined by a single issue. ... Everything is interconnected.” He grew up in a Southern Baptist church in Hong Kong that was very apolitical, but now he believes “there is no realm of life that is off limits to the work of God. If Jesus is coming to redeem all creation, then God has something to say about all aspects of life.”

Not surprisingly, in a demographic with so many competing values, priorities, and interpretations of Scripture, there are exceptions to almost every rule. There are Chinese American Christians who are lifelong Republicans voting for the Democratic ticket for the first time. There are second-generation Chinese Americans who are as concerned about abortion and gay marriage as their parents and are voting accordingly. One longtime church planter I spoke with holds to mostly conservative values but could not bring himself to vote for either major candidate; instead, he opted for a write-in candidate.

But what everyone can agree on is that this year’s presidential election is particularly divisive. “It feels like the national vibe is more polarized. Our inability to converse among peoples who have different perspectives of things is worse. The tendency toward spite and violence is quicker,” reflected Brad Wong, who leads a multiethnic Evangelical Covenant church in San Jose, California. “I think it’s an alarming, awful thing. It’s a national crisis.”

For many Chinese American Christians who are at odds with their parents, children, and social circles in this election cycle, it’s nearly impossible to maintain political silos. The division and tension are right in front of them, in their families and congregations.

John Lin, a second-generation Taiwanese American who serves as a pastor at a primarily Asian American church in Houston, worries deeply about the impact such intense political divides will have within the larger Chinese American Christian community. “I really wonder and wrestle with what does healing look like for the church,” Lin said. “So many of my brothers and sisters in Christ think so differently than I do.”

He likens the current division to a common phenomenon within Chinese immigrant churches: As the next generation grows up, they move from Sunday school to youth group to a separate English-language service. More often than not, that service eventually splits off into another church altogether. The differences in language, culture, and value systems are just too significant for parents and children to remain in the same congregation.

After this election, Chinese American Christians on different sides of the political divide “may need to learn to be apart for a while,” Fong said.

Any hope for future reconciliation, Lin believes, is based in the goodness and power of our shared God. “I know Christ is calling us to have an uncommon unity that defies these normal, human tendencies,” he said. “It will be a supernatural act of God to bring us back together.”

Follow CT 中文 by email, WhatsApp, and Telegram—and get involved!