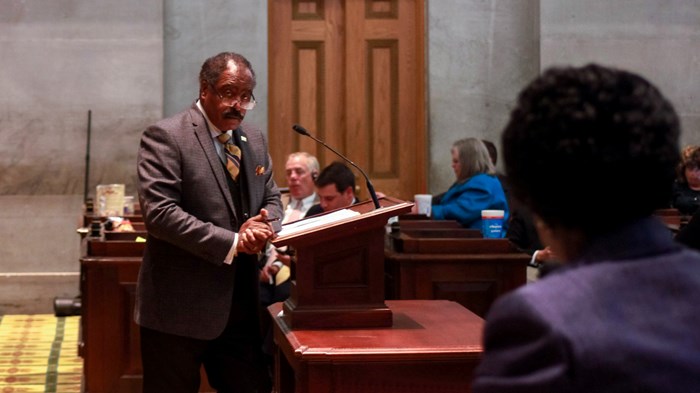 Editor’s note: This profile is the fourth in a CT series featuring Christian candidates who are running for legislative office in November.

John DeBerry insists he is not the one who changed; the Tennessee Democratic Party did.

The 69-year-old politician and Church of Christ pastor has represented part of Memphis in the state House of Representatives since 1994. But this year, after 13 consecutive victories in Tennessee’s 90th District, DeBerry was removed from the ballot and prohibited from running for reelection as a Democrat.

The Tennessee Democratic Party chair said DeBerry, who has voted according to his pro-life stance on abortion as well as in favor of school choice, “demonstrated more loyalty to the Republican Party than to the Democratic Party.”

DeBerry insists his voters have always known where he stood on abortion and other social issues; they sent him to Nashville again and again. “Life has mattered my entire career,” he told Christianity Today. “My principles have not changed, and I am not changing my principles because I have a D behind my name.”

DeBerry’s fight to stay in the race in Tennessee is an example of the precarious political position a dwindling number of pro-life Democratic politicians find themselves in. But DeBerry wants to remain in the party because, knowing his constituents, he believes he’s not alone; he says they too are Christian Democrats who stand for life.

DeBerry has been a Democrat since 1968 when he voted in his first presidential election. His parents were Democrats, but his grandparents had been Eisenhower Republicans. It was Christian leaders taking a stand during the civil rights movement—former president Jimmy Carter, Martin Luther King Jr., and Ralph Abernathy—that first spurred his own interest in politics.

DeBerry, who is also a pastor at Coleman Avenue Church of Christ in Memphis, sees faith as the foundation for his career in public service and how he thinks through policy issues.

He says you cannot fight for what is right based on political labels, but most rely on deeper convictions. “Fashion changes, style changes, laws change, but principles which are built on the Word of God don't change,” he said.

DeBerry believes abortion violates both God’s laws and the American principle that all persons have constitutional rights not based on their place of residency—those rights extend to those residing in the womb too.

The Tennessee politician, now running as an Independent, blames state party officials for taking a fundamentally undemocratic action to remove him from the ballot. He was already on the ballot when the party announced their decision, and a few of his colleagues spoke out on his behalf. House Minority Leader Karen Camper, a fellow Memphis Democrat, called the party’s actions “[an attempt] to nullify the choice of the people of the 90th District.”

DeBerry’s conservative positions may have frustrated some of his pro-choice colleagues, but they respect his leadership. They voted for him to serve as minority leader pro tempore for the entire Democratic Caucus. Legislators also passed a bipartisan bill to amend the Tennessee election code, allowing incumbents disqualified by their party’s executive committee, like DeBerry, to file a new petition under a different party identification past the standard filing deadline.

DeBerry has chosen to run as an Independent. On November 3, he will face progressive Democrat Torrey Harris, who would be both the youngest and the first openly gay member of the Tennessee House. When asked why he did not simply run as a Republican, DeBerry stated, “If I wanted to run as a Republican, I could have, but the majority of the district consists of Christian Democrats who share my pro-life views.”

According to Pew Research, young black Protestants have become less rigid in their opposition to abortion than previous generations, in part because they are more likely to view racial justice for those who are born as paramount. Yet DeBerry’s assertion that the majority of the black Democrats in his district share his views is borne out by the fact that he has beat out liberal African Americans in primary races twice since his district was redrawn in 2012, including Harris, his current Democratic opponent.

DeBerry is among state legislative candidates in ten states who received endorsements from Democrats for Life of America in 2020; the group endorsed just a single candidate for US Congress—Rep. Collin Peterson of Minnesota—this year.

Kristen Day, executive director of Democrats for Life, believes that “you do not have to be a Republican to care about life,” and as the party of the vulnerable and marginalized, the Democratic Party should take a stand for the unborn. Or at least not exclude politicians for doing so.

Day has pushed for an “inclusive, ‘big tent’ party” that doesn’t rely on abortion rights as the foundation of its platform and wouldn’t target pro-life Democrats like DeBerry. On a national level, US Rep. Dan Lipinski, a pro-life Democrat who served Illinois’s 3rd District for 15 years, lost his primary earlier this year to a pro-choice challenger who rallied more funding and support.

DeBerry likewise believes that the issue of abortion isn’t as starkly partisan as the “party elites” presume. According to a 2019 Gallup Poll on abortion, 24 percent of Democratic voters and 44 percent of Independent voters identify as pro-life. He says Democrats should not exclude that sizeable minority—many of them, like him, are religious people whose faith leads them to oppose abortion.

In evangelical denominations like DeBerry’s Churches of Christ, the Southern Baptist Convention, and Assemblies of God, as well as the historically black Church of God in Christ denomination, most say abortion should be illegal in all or most circumstances, per a Pew Research Center survey.

DeBerry cites one of his favorite verses, Matthew 22:21, “Render therefore unto Caesar the things which are Caesar’s; and unto God the things that are God’s” (KJV), as part of his reasoning for his stance. For DeBerry, only God decides life and death.

DeBerry is unsure whether he will caucus as a Democrat or Republican should the 90th District residents send him back to Nashville as an Independent. But he pledges, no matter what side he’s on, to always place principles over party and personality.

Kathryn Freeman is an attorney and former director of public policy for the Texas Baptists’ Christian Life Commission. Currently, she is a master of divinity student at Baylor University’s Truett Seminary and one-half of the podcast Melanated Faith.