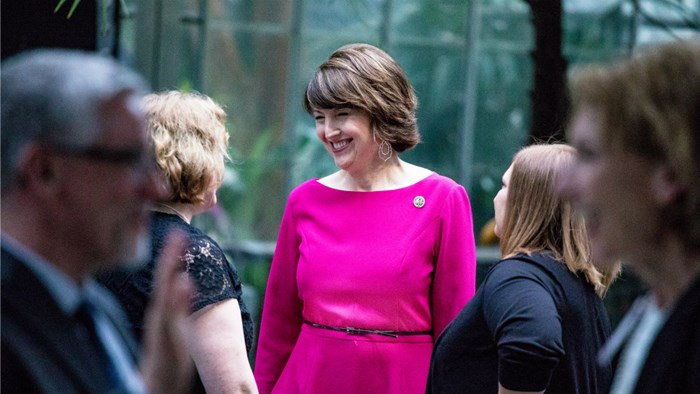 Image: Courtesy of Cathy for Congress

Update (November 4): Cathy McMorris Rodgers was reelected to a ninth term with 59 percent of the vote.

Editor’s note: This profile is the third in a CT series featuring Christian candidates from both parties who are running for Congress in November.

Congresswoman Cathy McMorris Rodgers has firsthand experience with what political division looks like. She knows how it feels to be hated. She has been called a liar, has had people turn their backs on her as she spoke, and was once booed off a stage.

It’s part of the reason she’s so passionate about unity.

McMorris Rodgers is seeking reelection to the US House of Representatives in Washington’s 5th District, an office she has held since 2005. McMorris Rodgers was at one point the chair of the House Republican Caucus, making her the highest-ranking GOP woman in the House, and she was considered by President Donald Trump for the position of Secretary of the Interior. Before congress, she served as a member of the Washington State House for 11 years. She is now seeking her ninth term as a US representative.

McMorris Rodgers won her last race by more than 30,000 votes, and according to a recent forecast from Politico, she is predicted to win again in 2020. She is also outraising her Democratic opponent Dave Wilson, according to reporting from the Spokesman-Review. By mid July, she brought in almost $3 million in contributions, compared to Wilson's $28,000.

But even though she’s winning, McMorris Rodgers knows the last weeks of the campaign won’t be without challenges. In fact, the last four years have brought some of the toughest days of her political career.

One of the worst was January 16, 2017. In that narrow stretch of time between an election and inauguration, McMorris Rodgers was asked to give a speech in Spokane. After a very divisive national election, the congresswoman was asked to talk about unity and the legacy of Martin Luther King Jr. She planned to discuss how tense it was on Capitol Hill and how she had charged her staff to be part of the change and healing in Washington, DC, culture.

She was just starting when the boos began. Some in attendance began chanting, “Save our healthcare.” She heard someone shout that she was a liar.

“It was really a difficult time,” McMorris Rodgers told Christianity Today. “There was a lot of division.”

Freda Gandy, executive director of Spokane’s MLK Family Outreach Center at the time, took the stage after the congresswoman and admonished the hecklers.

“I do understand where people were coming from,” Gandy told the local newspaper. “But we were there to hear from her, and to be in the same room together.”

As awkward and awful as that experience was, McMorris Rodgers had to follow it up hours later with another appearance at an event organized by the local NAACP chapter in Spokane. McMorris Rodgers had reached out to ask how she could help after some racist graffiti had been spray-painted on a nearby outreach center. She was invited to take part in an event and agreed.

After getting booed, she was a bit apprehensive about what she might be walking into.

The NAACP had gathered representatives from law enforcement, education, the African American community, the Asian community, and the LGBT community for a 90-minute roundtable. They talked, and then as a group they identified three areas that they wanted to improve, establishing priorities they could all share.

McMorris Rodgers said the experience blew her away. Despite their varied backgrounds, they now had common goals.

“I can embrace this,” she remembers thinking.

The meeting gave her a renewed vision of unity—one that she’s pursued through divisions and disagreements for the last four years and one she is pitching to the voters again as she asks for their votes in November.

McMorris Rodgers is a conservative who receives consistently high marks from conservative lobby groups, especially on the issues of opposing abortion, defending the Second Amendment, and supporting Washington State businesses.

Her detractors say she is too aligned with Trump and unwilling to criticize him even when she disagrees. McMorris Rodgers mostly support’s Trump’s agenda but has broken with the White House on a few important issues. In the last session, she voted against Trump’s plan to withdraw US troops from Syria, his proposal to lift sanctions on several Russian businesses, and his emergency declaration providing funds for a border wall.

From McMorris Rodgers’s perspective, though, there’s already a lot of criticism and a lot of division. She’s more interested in what brings her district together.

One way McMorris Rodgers has tried to pursue unity in Washington’s 5th District is through regular dinner gatherings. The idea originally came from a Christian friend who owns a coffee shop in Spokane who asked her if she ever brought people together for a meal. He suggested that food has a way of generating good conversations.

McMorris Rodgers liked the idea and made it a reality. Some of the conversations were easy. Others were tough. There were times people sat down at the table with completely different viewpoints. But in the end, she believes the unity dinners have helped foster greater understanding.

“I think it’s important to go outside your comfort zone. It’s important to reach out to those who don’t look like you or don’t share the same background or experiences,” she said. “We would come together, and you’d find everybody has a story and everybody has had struggles and heartache and loss in their lives. … At different times we all need each other.”

McMorris Rodgers was raised in a Christian home and attended Pensacola Christian College for her undergraduate degree. Today she belongs to an Evangelical Free church and says her relationship with God has shaped her beliefs in many areas of life and politics. This year, it has motivated her more than ever to bring people together in prayer.

“I recognize we may not all agree on the same things,” McMorris Rodgers said. “We‘re going to bring different opinions, differing agendas, but as we come together in prayer, I find that we build relationships. We build understanding. We build trust so that we can actually have a foundation from which we can discuss and search for solutions.”

That doesn’t mean there won’t be challenges, though.

Washington’s 5th District, like a lot of places in America this last summer, experienced some divisions over issues of racism after the death of George Floyd and the subsequent protests. Spokane saw thousands gathering to demonstrate against police brutality, some vandalism, and then armed counterprotesters.

McMorris Rodgers points to the community’s response to that division, though. The morning after destructive protests, she said, people from the community stood up and spoke out against the destruction while defending the rights of peaceful demonstrators.

Now, she’s watching her community come together in response to COVID-19.

“I’ve been heartened by so many stories of people helping each other, of creative ideas and American ingenuity,” she said. “Those stories of creativity and ingenuity have been inspiring.”

One distillery in her area switched to making hand sanitizer. A young volunteer started printing material for masks on a 3-D printer.

For her, these are real-life examples of people bearing each other’s burdens. This is a time of burdens, she said.

The president touted economic successes in his State of the Union Address in February and declared a “blue-collar boom,” saying America is the envy of the world. While there have been great accomplishments in the last four years, McMorris Rodgers said she worries about the people who are struggling.

“At the very same time, we had record suicides, record divorce, record substance abuse,” she said. “In America we had a lot of people who were being overcome by despair.”

To address this despair, she began getting other women—Democrats and Republicans—together to pray and seek God’s face.

In an election year when tensions are high, voices are raised, and the nation seems to move from crisis to crisis, McMorris Rodgers believes there are only more reasons to pray. She knows what division looks like, and she has decided this is the best way to respond. It’s her message for this moment and this year.

“It’s a time when we’re going back to fundamentals and priorities,” she said. “As each one of us individually seeks God, it brings you a peace in the midst of it.”