Loyal to the president, the Midwestern politician has been at work in the background.
Daniel Silliman|October 7, 2020 06:30 AM 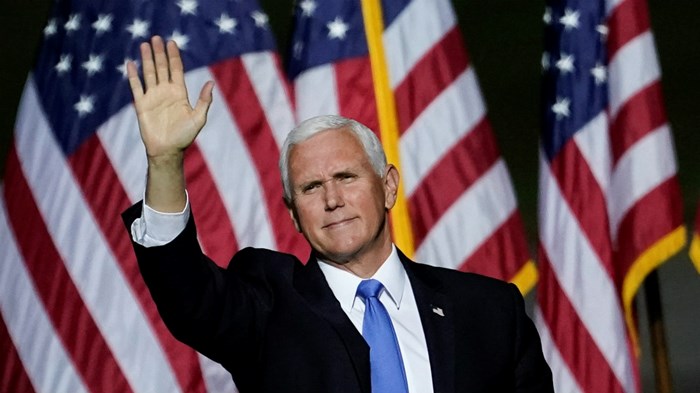 Vice President Mike Pence, set to take the stage Wednesday night in a debate against Senator Kamala Harris, has largely been a background figure in the national discussion over Donald Trump’s presidency. But that may be more about his style than his substance.

Pence played a pivotal role in the administration’s first legislative victory, working out the deal that got the fighting factions of Republicans in the House and the White House to agree to pass the American Health Care Act, which would partially repeal and replace Obamacare.

Then, at the last moment, he had a condition of his own. The “Pence Amendment”—an idea he’d proposed for state-based waivers—couldn’t be called that. He didn’t want to take any credit. Tim Alberta, the conservative political reporter for National Review and Politico, sees this as a quintessential Mike Pence moment.

“The vice president’s persona—the wholesome, aw-shucks, milk-drinking Midwesterner—masks the skill set of a savvy political operator,” Alberta wrote. The former governor of Indiana will “get the job done, and avoid all acclaim in the process.”

Pence is “the 24-karat-gold model” of what politically conservative evangelicals want in a politician, according to Richard Land, president of Southern Evangelical Seminary in North Carolina and former head of the Southern Baptist Convention’s Ethics & Religious Liberty Commission.

“I don’t know anyone who’s more consistent in bringing his evangelical-Christian worldview to public policy,” Land said in 2018.

Pence was raised Catholic and had a born-again experience as a freshman in college, making a personal decision to accept Jesus as his Savior. For a while, he called himself an "evangelical Catholic." In Indiana his family attended an Evangelical Free church.

“I’m a pretty ordinary Christian,” Pence once told a reporter, “trying to make that faith real every day.”

Political scientists say that the vice presidential candidate rarely moves more than a few voters—but the choice determines who will be next in line if the president dies, and says something about the future of the party and the future of the country. In 2016, the VP debate was watched by about 37 million people.

On Wednesday night, Pence will square up with Harris at the University of Utah. According to a recent YouGov poll, 40 percent of Americans say they have a favorable opinion of Pence. He’s more popular than Harris among white people, men, and Americans over the age of 65. About 14 percent of the public, however, has no opinion of the vice president.

As Pence makes his case for four more years for Trump, here are five significant things he’s done so far as his No. 2:

Pence was picked as a running mate at least partly to reassure conservative evangelicals that they could trust Trump.

“Mike Pence is there praying over the White House every day,” said Mark Burns, an African American pastor and televangelist who decided to support Trump in 2016, although he had previously voted for Barack Obama. “It takes somebody who knows when you’re headed toward a storm to be there praying for you.”

The prominence of this role has faded somewhat in four years, as Trump has developed his own relationships with a team of evangelical advisers—led by Paula White-Cain—and depended less on Pence to play intermediary.

Yet Pence still serves an evangelical outreach role, joining Franklin Graham at a prayer march in Washington, DC, last month to say, “Thank you for your prayers,” and traveling to Texas last summer to appear at Robert Jeffress’s First Baptist Church of Dallas.

“Of all the people President Trump could have chosen to stand by his side and work with him, he chose a man like Mike Pence—a man of great faith and a man who believes in the power of prayer,” Jeffress said.

Where Trump seems to love the excitement of chaos—an asset, according to supporters, and a threat, detractors say—Pence has remained steady and calm. When Trump was impeached and faced removal from office, the vice president didn’t do anything to make that moment more exciting, continuing to stand behind the president.

Last weekend, as Trump tested positive for COVID-19 and was moved to Walter Reed National Military Medical Center, Pence was similarly ready to step in if needed, but it was clear he wouldn’t overstep.

When the Senate is deadlocked 50 to 50, the vice president casts the deciding vote. Pence has tipped the balance 13 times, more than any other VP since Schuyler Colfax, who served as No. 2 for Ulysses S. Grant. Pence cast the deciding vote to confirm Betsy DeVos as head of the Department of Education and the vote to allow 13 states to block federal money from going to Planned Parenthood.

As a congressman, Pence was the first to propose legislation that would defund Planned Parenthood. “If you follow the money, you can actually take the funding supports out of abortion,” Pence said. “We then have a much better opportunity to move forward to be a society that says yes to life.”

Pence steered US aid to Iraqi Christian minorities persecuted by Islamic State. He has been criticized for not doing enough, and for interfering where he shouldn’t have, but the vice president’s commitment is clear. Pence wants America to take a leading role in advocating for religious freedom in the world and aiding Christians who suffer violence and loss of liberty for their faith.

“In more than 100 countries spread to every corner of the globe—from Iran to Eritrea, Nigeria to North Korea—over 215 million Christians confront intimidation, imprisonment, forced conversion, abuse, assault, or worse, for holding to the truths of the gospel,” Pence said. “America will stand by followers of Christ in this hour of need.”

Pence also pushed for diplomatic pressure to be applied to Turkey to get the government to release captive American pastor Andrew Brunson, and he condemned Venezuelan leader Nicolás Maduro for persecuting Catholic clergy.

5. Champion a Mission to Mars

In addition to his passion for religious conservative causes, one of Pence's main policy focuses has been the heavens. The vice president has “taken the lead on rebuilding the nation’s space program,” according to Indiana reporter Adam Wren. He helped reinstitute the group of experts who advise the president about space policy and now chairs the National Space Council. Pence has pushed funding for the Space Force, saying American military security should be as important in space as it is on Earth.

Pence is an active proponent of the plan to return to the moon by 2024, before forging on to Mars. NASA is currently working to establish a permanent presence on the lunar surface, where astronauts can live for months at a time and develop the technologies to take the next big leap to land humans on another planet.

“While the tasks before us involve hardship and hazard, sacrifice and perseverance, we know what the men and women of Apollo 11 knew 50 years ago, and that is simply this,” Pence said in 2019. “Americans can accomplish anything we set our minds to. And America will lead the world back into the vast expanse of space.”