New claims raise concerns that previous allegations were not thoroughly investigated by his denomination.
Daniel Silliman|October 5, 2020 09:50 AM 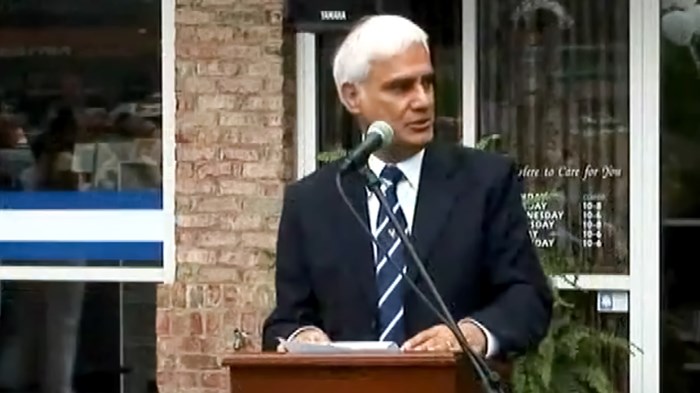 The denomination sent a letter to Alliance workers on Friday announcing that the leadership had “determined that we must look into these new allegations, in spite of the fact that Mr. Zacharias passed away earlier this year.”

Zacharias, a prominent apologist and ministry leader, was ordained and licensed by the CMA up until his death in May. The new allegations came from former employees at two Atlanta-area day spas Zacharias co-owned and frequented for massage therapy more than a decade ago.

Terry Smith, vice president of church ministries for the CMA, said it is unusual to investigate sexual misconduct after the accused has died, but the denomination is “fully accountable” for its licensed ministers—no matter their level of celebrity or international renown.

The CMA holds that people are disqualified from leadership if their behavior causes “imminent harm to others or to the testimony of Christ.” Its formal disciplinary procedure prioritizes restoration, however, which isn’t possible when the offending minister has died.

“Normally when a worker is investigated, they’re alive so they can speak to the accusations against them and can receive whatever punitive steps the discipline committee gives them,” Smith told CT. “Our goal [here] is to discover the truth to the best of our ability to do so.”

The CMA may also revisit previous allegations against Zacharias. It said in the announcement that the new information reported by CT “raised concerns” about the decision not to discipline Zacharias after a prior investigation.

In 2017, Zacharias faced allegations that he solicited sexually explicit photos and engaged in phone sex with a woman in Canada, Lori Anne Thompson, who supported his ministry.

Zacharias admitted he had a correspondence with Thompson but denied everything else, claiming it was part of an extortion plot. Zacharias sued Thompson and her husband, and the couple asked that the case be moved from civil court to Christian mediation. The mediation ended with a settlement and a non-disclosure agreement, which does not allow Thompson to speak about the allegations.

The CMA decided in 2018 not to remove Zacharias’s credentials, “based on the information available at the time,” the denomination stated last week.

At the time, the CMA said it had “completed a thorough inquiry of these accusations, including interviews with those involved and a review of all available documentation and records.” Zacharias’s ministry has used the denomination’s findings to defend him.

However, Thompson said the process was not as robust as indicated. She told CT she spoke to CMA leaders on the phone twice—once while “sobbing uncontrollably on the side of the road in my vehicle”—and then the investigation was over.

Ravi Zacharias International Ministries (RZIM) reiterated as recently as last month that Zacharias “denied any sexually or romantically inappropriate conduct” with Thompson and “stood by that statement until his death.”

RZIM announced on September 24 that it would conduct own investigation into the spa allegations but stated at the same time that “the family and ministry teammates of the late Ravi Zacharias … believe them to be false.” RZIM also suggested that allegations made after someone has died cannot be trusted.

Victims advocates have challenged the CMA to review the case and provide oversight, concerned about the potential conflict of interest when ministries investigate their own leaders.

The three women who shared their stories with CT said they did not think Zacharias would be held accountable by an international, multi-million dollar ministry that bears his name. They didn’t expect money or apologies, but they spoke up because they think there may be other women out there who were hurt by the apologist and they want those women to know they are not alone.

Smith acknowledged concerns that Zacharias, arguably the best known apologist in the world, was treated as a celebrity by the CMA and not like other ministers of the gospel.

“We don’t want anyone to think we show favoritism in any of these cases or situations,” he said. “We’re going to investigate this like we would have done for any other official worker.”

The law firm doing the investigation began its work Friday and has been told to look at anything involving “sexual misconduct,” according to Smith. He declined to name the firm.

Victims advocates say that in addition to investigating allegations, Christian organizations should examine their structures and ministry cultures.

“It’s more than just, ‘Hey, create a protocol.’ It’s also working hard to shift the culture in our churches so that no one is beyond accountability,” said Boz Tchividjian, founder of GRACE and an attorney for victims of sexual abuse with the law firm Landis Graham French, PA.

“Beyond the investigation, an organization needs to be doing what it can to shift the culture,” he said. “Talk about these matters repeatedly, publicly. Talk about how you don’t care who it is, no one in leadership is beyond accountability. And prevent leaders from becoming mega rock stars in the first place.”

With reporting by Kate Shellnutt.