For US archaeologists, major discoveries will have to wait until next year, at least.
Gordon Govier|September 4, 2020 10:00 AM 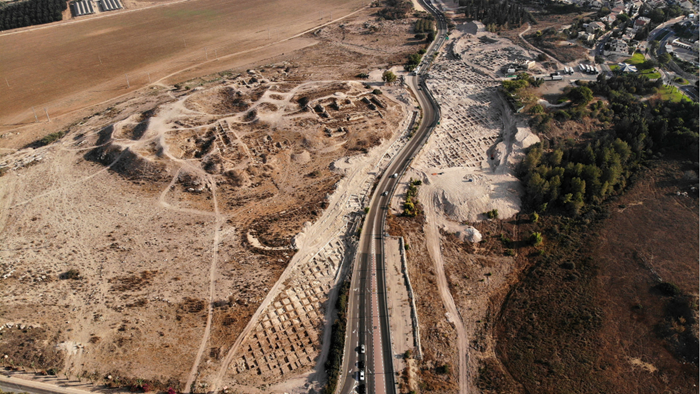 Dale Manor had a plan for 2020: Unearth an ancient Canaanite shrine in the lowlands of Judah, about 20 miles west of Jerusalem. Like so many plans for 2020, it was interrupted by a global pandemic.

So now the professor emeritus of archaeology and Bible at Harding University in Arkansas has a plan for 2021: Unearth that Canaanite shrine in Beth Shemesh, the city where the Philistines returned the captured Ark of the Covenant to Israel in 1 Samuel 6.

There are some drawbacks to putting an excavation on hold, Manor told Christianity Today. “There is an increased risk of site deterioration, both from the elements and plundering,” he said.

A highway also runs through the ancient Beth Shemesh site, and it is in the process of being widened. There have been some conflicts in Israel between the people who want the road and the people trying to preserve the biblical history buried underneath it.

The pause couldn’t be avoided, however. For biblical archaeologists, 2020 will be remembered as the summer without digs. Most projects were stopped as the coronavirus spread and international travel was suspended.

There were a few exceptions. An Israeli team did about a month of work at Tel Azekah, the site of the confrontation between David and Goliath (1 Sam. 17:1) and a Babylonian siege (Jer. 34:7).

Manor and other archaeologists said they used this summer to catch up on their analysis of artifacts and writing, while remaining hopeful that excavation work can resume again next year. Archaeology didn’t stop, they said, even if excavation did.

For now, biblical cities and sites wait across the Holy Land, their treasures yet to be revealed.

On the northern shore of the Sea of Galilee, excavation has stopped at a city that might be the true location of Bethsaida, home of the disciples Phillip, Peter, and Andrew. Archaeologists made some discoveries in 2019 that led them to think el-Araj could be the historic city, challenging the claim of nearby el-Tell.

Steven Notley, the academic director of the project and professor of New Testament at Nyack College in New York, believes some ornate mosaic floors found last year demonstrate that el-Araj was Bethsaida. Recent flooding has experts worried about damage to the site, however, and the damage cannot be fully assessed until next year at the earliest.

At Tel Shiloh, the excavation of a building from the time when Shiloh was the worship center of Israel (Josh. 18:1) will have to wait until 2021. “In three seasons of excavation, we have uncovered significant evidence of the ancient Israelite sacrificial system at Shiloh,” said excavation director Scott Stripling, who is provost of The Bible Seminary in Texas.

Excavations at a site in far northern Israel, Tel Abel Beth Maacah, were originally postponed from June to August but then postponed further to 2021, according to co-director Robert Mullins, chair of the Department of Biblical and Religious Studies at the Azusa Pacific University School of Theology in California. However, Mullins’s two Israeli co-directors were able to lead a team of eight Hebrew University students on a five-day excavation.

Abel Beth Maacah is most famously the city where King David’s general Joab convinced a wise woman to have her fellow residents throw the head of the rebel Sheba son of Bikri over the wall (2 Sam. 20:14–22), ending the conflict there.

A glazed ceramic head of a bearded man—believed to be a king from the time of Ahab—was found in the citadel area at the summit of the mound in 2017. This summer, the Hebrew University students found a cylinder seal in a nearby building.

Cynthia Shafer-Elliott, professor of Hebrew Bible and archaeology at William Jessup University in California, would normally have spent part of her year supervising one square of the excavation at Abel Beth Maacah. Instead, she had to watch via social media.

Shafer-Elliot said that being home instead of in the field allowed her to make some progress on other projects, but she still regretted not being there.

Mullins also said he was glad for an “unplanned” study season to make headway on an academic article. Still, he’s eager to get back to digging on the citadel.

Another dig—the Tel Dan excavation in northern Israel—has also been halted. Jonathan Greer, associate director of the excavation and professor of Old Testament at Cornerstone University in Michigan, said he hoped work on a temple complex on the northern edge of the dig would resume in 2021.

“I am most interested in learning more about the worship of Yahweh in the Northern Kingdom as it compares and contrasts with Judah and the way this relates to biblical priestly texts,” he said.

New Orleans Baptist Seminary professor Daniel Warner is looking forward to getting back into the field at Tel Hadid next year, where he is co-director. The location, near Ben-Gurion airport, has “significant potential to be a key site to fill in some needed information about the expansion of Israel into the Coastal Plain and lowlands,” Warner said. One early discovery: the largest screw-type wine press ever found in Israel.

A small team of students from Tel Aviv University worked at Tel Hadid for a couple of weeks this summer, digging test pits. The pits will help Warner and his co-directors decide where to continue their excavations next year.

But in the meantime, he has been writing up the report on the Tel Gezer water system. Canaanites are believed to have chiseled the system out of solid rock 4,000 years ago. It took archaeologists about nine years to muck out the water and sediment that flooded the ancient system.

“It’s the earliest of its kind anywhere in the ancient world,” Warner said. “The only thing similar are underground tunnels dug within the pyramids at Giza.”

Gezer is mentioned more than a dozen times in the Bible. It was presented to Solomon in 1 Kings 9:16 as the dowry of Egyptian pharaoh’s daughter. The water system is a feat of engineering and probably gave Canaanite residents access to drinking water. But during his research, Warner has also come to believe it was likely religious too.

“The tunnel is perfectly aligned east-west,” he said, which may imply “they’re trying to capture the morning sun for their rituals.”

Warner would like to spend a couple more weeks excavating an area between the water tunnel and a nearby Bronze Age city gate to help him better understand the significance of the water system. He also wants to get back to Tel Hadid.

But for now, he and other US archaeologists have to wait out the summer of no digs.