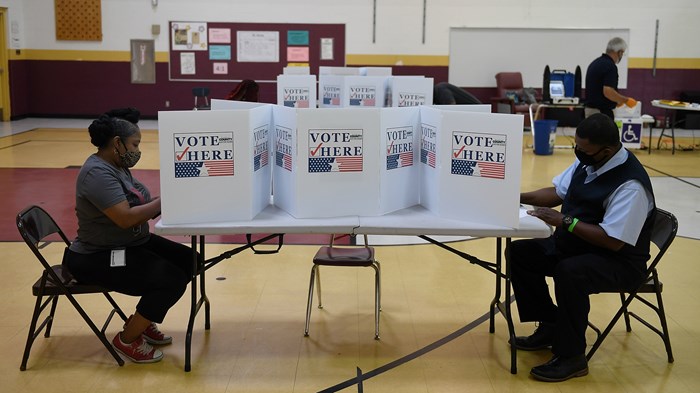 “Voting for or against an incumbent president is a more certain situation for voters,” said Scott McConnell, executive director of LifeWay Research. “Fewer Americans, including those with evangelical beliefs, are on the fence than at this same point in 2016.” 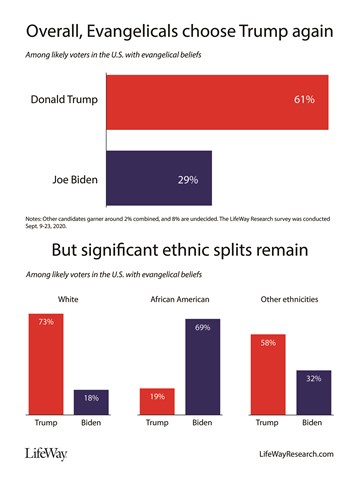 Voting plans for Americans without evangelical beliefs are almost the mirror opposite of their evangelical counterparts, with Biden holding a commanding 56 percent to 33 percent lead over Trump.

President Trump’s advantage among evangelicals, however, comes primarily from white evangelicals, among whom he leads Biden 73 percent to 18 percent.

African Americans with evangelical beliefs overwhelmingly plan to vote for Biden (69% to 19%). Among American evangelicals of other ethnicities, however, Trump has a 58 percent to 32 percent lead.

While almost a quarter of white evangelicals were undecided or supporters of a third party in 2016, few say the same in 2020. Only 2 percent back a third-party candidate this year, compared to 8 percent four years ago. And while 16 percent were undecided in 2016, that number fell to 7 percent this year.

“Different ethnic groups are more attuned to specific failures of our country and of specific candidates,” said McConnell. “One’s ethnicity and political party are more powerful in predicting the vote of someone with evangelical beliefs than their shared religious convictions alone.”

Among likely voters who identify as Christian and attend church at least once a month, support for Trump and Biden is evenly split (46% to 45%). As with evangelicals, ethnic divides are also present among churchgoers.

White churchgoers back Trump 59 percent to 30 percent, while African American churchgoers are solidly behind Biden (86% to 9%). The former vice president also has a sizeable—though smaller—lead among Hispanic churchgoers (58% to 36%) and churchgoers of other ethnicities (49% to 36%).

Improving the economy and fighting the pandemic are the top characteristics registered voters say they are looking for in a presidential candidate. Evangelicals agree but are much more likely to also point to abortion and religious liberty as factors. 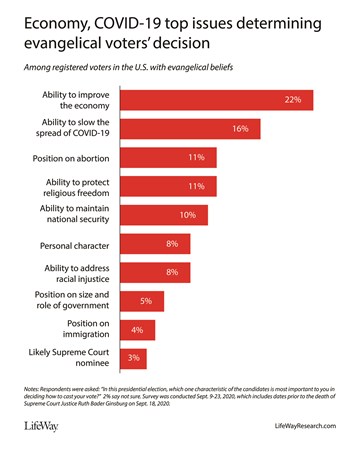 A majority of registered voters say an ability to improve the economy (72%), slowing the spread of COVID-19 (58%) and maintaining national security (55%) are important factors in deciding their vote.

Close to half say the same about addressing racial injustice, personal character, and the candidate’s position on immigration.

Trump voters are more likely than Biden voters to say the economy, national security, immigration, religious freedom, abortion, Supreme Court nominees, and the size and role of government are important issues in determining their vote.

When asked the single most important issue in determining their vote, 26 percent of registered voters point to the economy, 22 percent say slowing the spread of COVID-19 and 15 percent say personal character. No other issue garners more than 8 percent.

Among evangelicals by belief registered to vote, improving the economy and slowing COVID-19 remain the top issues, but the candidates’ position on abortion, and ability to protect religious freedom are more likely to be the top priority compared to those without evangelical beliefs.

Fewer evangelicals (8%) than other Americans (16%) say the personal character of the presidential candidate is the most important issue in deciding their vote.

LifeWay Research also asked registered voters, “Who do you hope your presidential vote benefits the most?” More than a third (35%) say people nationwide who are like them, and 22 percent say people whom our country has failed.

Fewer say they hope the ones who benefit the most from their vote are themselves and their family (17%), people nationwide who are different from them (10%) or people in their community or region (7%).

Evangelical voters are more likely than other registered voters to say they hope their vote most benefits people nationwide who are like them (41% to 34%).

Registered voters with evangelical beliefs are also less likely to say they hope their vote most benefits people our country has failed (15% to 24%).

“Few Americans with evangelical beliefs will be casting a ‘Good Samaritan’ vote on election day,” said McConnell. “Instead, most will vote to benefit those like them or their own family.”

Those voting for Trump are more likely to say they hope their vote most benefits themselves and their family (21% to 14% of Biden voters) and people nationwide who are like them (43% to 31%).

Biden voters are more likely to say they are casting their vote in hopes that it most benefits people who our country has failed (32% to 10% of Trump voters).

Based on an online survey of 1,200 Americans was conducted Sept. 9-23, 2020, using a national pre-recruited panel. The sample provides 95 percent confidence that the sampling error from the panel does not exceed plus or minus 3.2 percent. This margin of error accounts for the effect of weighting.