With mixed messages from leaders, evangelicals in Nicaragua and Bolivia have been especially hard-hit by the pandemic.
Associated Press|September 3, 2020 10:51 AM 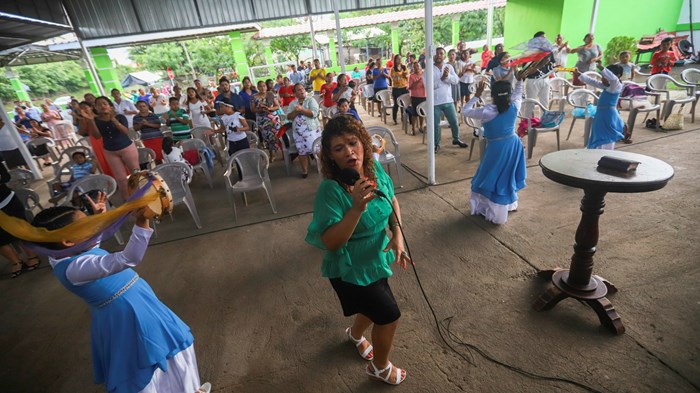 Some 400 men and women spaced themselves across a sprawling worship hall, praying through face masks with arms raised for the health of friends and family suffering from the coronavirus.

The congregation of Managua’s Bethel Restoration church knew the pandemic’s wrath: Two of its pastors were among the more than 40 evangelical leaders who have died in Nicaragua since March.

Throughout Latin America, a traditionally Catholic region with a surging evangelical presence in nearly every country, evangelical churches have kept spreading the gospel despite government measures meant to slow the spread of the coronavirus. In many countries, evangelical churches have flouted public health guidelines by holding in-person services, or have personally ministered to church members in homes and other settings.

In at least two countries, evangelical pastors have died in alarming numbers during the pandemic.

In Bolivia, where some 100 evangelical pastors have died, they have maintained close contact with their congregations, ministering, and providing support to the sick even though churches were closed early by government decree.

In Nicaragua, where the government has played down the epidemic and avoided imposing restrictions, evangelical services continued at some churches even as the more hierarchical Roman Catholic churches stopped holding in-person Mass.

“There was too much misinformation,” said Raúl Valladares, who took over Bethel’s congregation after his father and another pastor died June 5. “Just in our denomination, some 20 pastors have died. And at Bethel we have a pastor, my father, and some 25 brothers (members) who died from COVID-19,” though he said the church had tracked the cases and didn’t believe they stemmed from services.

In Brazil, the Catholic bishop’s conference halted Masses and indoor celebrations after the pandemic hit the country in mid-March, but most Protestants kept holding services. Authorities began relaxing restrictions in June and some Catholic churches reopened, with extra precautions.

Meanwhile, some neo-Pentecostal leaders in Brazil have advocated for miraculous cures or called the disease a plague that kills those of little faith and vowed to continue services. They have been strongly backed by President Jair Bolsonaro, who counts many among his most fervent supporters. The president declared in March that religious activities were essential during the pandemic, allowing churches to open and religious workers to move around. But some states have enforced their own restrictions.

Long after the virus appeared in Nicaragua in March, the government of President Daniel Ortega continued holding and promoting mass events. Schools remained open, the baseball season continued. Ortega, like Bolsonaro, said that the country couldn’t afford to stop working.

Bethel stayed open until the Assemblies of God Nicaragua Conference, to which Bethel belongs, told the majority of its churches to close immediately May 12 until June 1 due to the pandemic’s spread. After June 1, church leaders were allowed to decide when to reopen.

Ovidio Valladares, the family patriarch and director of Bethel’s Radio Restoration, was hospitalized May 26 and never recovered.

Bethel remained closed until Aug. 2, when it reopened with masks required, hand sanitizer at the entrances, and spacing between chairs in a large worship hall holding a fraction of its previous capacity of 1,500.

According to the Nicaraguan Evangelical Alliance, which includes most of the more than 100 Christian denominations in the country, at least 44 pastors have died since March. Not all of those deaths were confirmed as COVID-19 because of a lack of testing.

Evangelical pastors in Bolivia tried to keep in contact with parishioners even though churches in most part of the country remained closed.

“They went to pray, to visit the sick; in that work they died,” said pastor Luis Aruquipa of the National Christian Council, who said more than than 100 evangelical pastors have died in the pandemic.

Among them was Roberto Arismendi, founder of the Evangelical Churches of Bolivia. The 79-year-old Aymara pastor died July 20 from complications related to COVID-19, said his son Javier Arismendi.

“My father never stopped helping people, he was always close to his congregation, giving them faith, but also food and peace,” said the younger Arismendi, who has taken over the church since his father’s death. “We don’t know in what moment he got infected, but he brought the virus to the whole family.” Eight family members fell ill, but all recovered.

The church, in a working-class La Paz neighborhood, saw its congregation hit hard. “Thirty percent of our congregation of almost 100 people were affected,” he said.

Overall, the country of about 11.5 million people has seen more than 108,000 reported infections and nearly 5,000 government-confirmed deaths.

Back in Nicaragua, many evangelical churches have reopened, some with health precautions, like Bethel where congregants are asked to bring their own hand sanitizer. The measures were recommended by the senior Valladares before he died.

But other churches carry on as normal.

At the Oasis of Peace church in Masaya, south of the capital, about 70 congregants without masks packed together under an open-sided pavilion singing and shouting while a Christian rock band played behind the pastor. There was a thermos of water at the entrance for handwashing, but no one appeared to use it.

“We’re living in difficult times, times in which not only our country is being lashed, but on a global level,” said worshiper Maynor Campos. “It is time to seek the presence of God.”