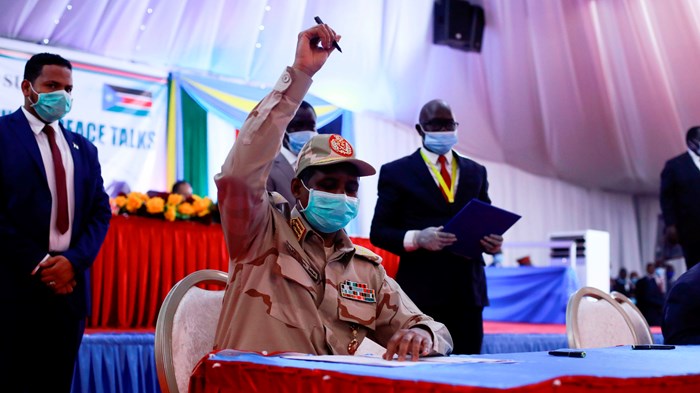 “The constitution should be based on the principle of ‘separation of religion and state,’” read the text of an agreement between the North African nation’s joint military-civilian transitional council and the Sudan People’s Liberation Movement–North (SPLM–N).

“The state shall not establish an official religion.”

The declaration of principles further cements Sudan’s efforts to undo the 30-year system of strict sharia law under President Omar al-Bashir, during which Islam was the religion of the state.

The agreement was signed in Addis Ababa, Ethiopia, four days after a more inclusive peace deal was signed with a coalition of rebel groups in the Sudan Revolutionary Front in Juba, South Sudan.

The Juba agreement established a national commission for religious freedom, which guarantees the rights of Christian communities in Sudan’s southern regions.

Sudan’s population of 45 million is roughly 91 percent Muslim and 6 percent Christian. Open Doors ranks Sudan at No. 7 among the 50 nations where it is hardest to be a Christian.

The US Commission on International Religious Freedom (USCIRF) interpreted the agreement even more widely: to protect the rights of all Sudanese people to practice their religion of choice.

With a stronghold in the southern Nuba Mountains within the South Kordofan region, an area with a significant Christian population, the SPLM–N held out of the initial peace deal specifically because it did not guarantee the separation of religion and state.

“There’s no equality between black and Arab, and Muslim and Christian.”

But now including most of the major rebel movements in the western Darfur region and the Sudanese south, democratic transition can continue with national unity.

Following months of popular protests, Sudan’s military overthrew Bashir in April 2019. An interim constitution—which notably omitted reference to sharia law as the primary source of legislation—was signed in August 2019, establishing a ceasefire and a six-month window to achieve peace.

Negotiations began in late 2019, and the February 2020 deadline was extended.

Autonomy is granted to the southern regions of Blue Nile and South Kordofan. Darfur, which had been split into five regions, will be reunified under its own governor with a special revenue-sharing agreement.

Rebel parties will receive 35 percent of government ministries, and 75 seats in the upcoming 300-member transitional parliament. Individual militants will be incorporated into the national army.

Sudan is currently led by an 11-member Sovereign Council, with one member a Coptic Christian. Currently headed by a military figure, a civilian will take the helm halfway through the three-year transition ending in 2022, with new elections.

Since conflict erupted in Darfur in 2003, about 300,000 were killed with 2.7 million displaced from their homes. Thousands more were killed in the south since fighting began in 2011.

In September 2019, Sudan and the United Nations agreed to open human rights offices in marginalized areas with significant religious minorities.

The government additionally disbanded church councils used to control Christian congregations, declared Christmas a national holiday, and stated it is working on a uniform law for all religious worship.

But there is still much to do.

USCIRF noted that promised compensation claims for churches destroyed or confiscated during Bashir’s reign have been held up by bureaucracy. It called for full repeal of the blasphemy law, which still stipulates a six-month imprisonment. And much work is necessary to reform remaining Islamist imprints in the judiciary and Ministry of Education.

Despite earlier hopes, Christianity will not be introduced for the first time in the national school curriculum. One pastor has complained that compulsory Islamic education sometimes results in the forced conversion of Christians to Islam.

And following the July repeal of sharia-based measures, thousands of Sudanese rallied against the “apostasy government.”

Sudan has witnessed several failed peace deals in the past, and significant hurdles toward full religious freedom remain.

But Christian leaders are hopeful.

“People here prefer to be cautious,” said Tombe Trille, Catholic bishop of El Obeid, capital of northern Kordofan, to the Vatican’s news agency. “But it is very important that a signature has finally been reached.

“We are all very happy.”