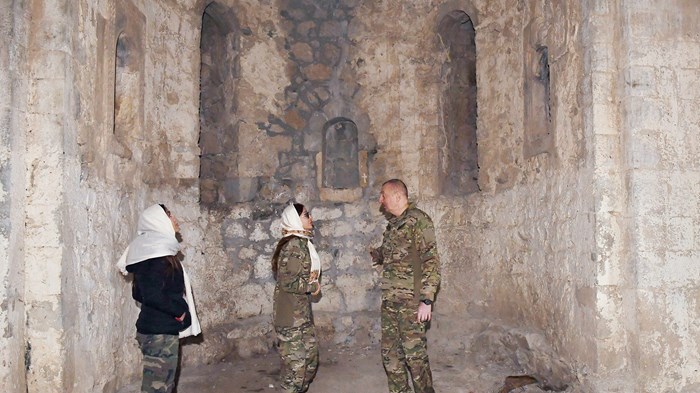 Update (April 24): President Joe Biden has officially declared the deaths of 1.5 million Armenians in 1915 to be a “genocide.”

Armenian fears of a new genocide were put on hold following the fall of Shusha, the crown jewel of Nagorno-Karabakh, high in the Caucasus Mountains. Last November, Azerbaijani forces captured the city—known to Armenians as Shushi—after which a cease-fire ended the military hostilities.

But not the cultural ones.

Last month, satellite imagery allegedly revealed the destruction of Shusha’s Armenian Genocide Memorial, constructed in 2009. Its desecration leaves a bitter taste during this year’s April 24 remembrance of the 1.5 million lives lost when Turks expelled Armenians from their homes a century ago.

President Joe Biden may recognize the atrocity by stating the word genocide in his commemorative speech.

But the horrors witnessed in Turkey reached also to Shusha, where Azerbaijanis massacred the local Armenian population.

“As in 1915, the Turco-Azeris are committing not only a human genocide against the Armenians but also a cultural genocide,” said Rene Leonian, president of the Union of Armenian Evangelical Churches in Eurasia. “Unfortunately, nations and international organizations are too passive to firmly condemn these abuses.”

They can now add the case of a vanishing church building to the list.

Following the war, video footage emerged of an Azerbaijani soldier shouting “Allahu Akbar” from the rooftop of the Holy Mother of God Church in the town of Jabrayil. Later, in searching for the simple stone-built chapel, the BBC discovered no trace whatsoever.

The escorting policeman first said it was destroyed in the war. He then changed his story, saying the Armenians dismantled it before they left.

Presidential advisor Hikmet Hajiyev told the BBC the matter would be investigated but then shifted the discussion to the nearly 30-year Armenian occupation.

The shift was not wholly inappropriate.

The church in question was built on a military base, after Armenia seized the disputed Caucasus enclave during the first Nagorno-Karabakh war in 1993. Jabrayil became a ghost town, as Azerbaijani residents fled. The area was later looted and left in ruins.

Nagorno-Karabakh means “mountainous black garden,” in a combination of Russian, Turkish, and Persian names. Armenians call the region “Artsakh,” as it was named in their fifth-century kingdom. It changed hands throughout the centuries, and in 1923 then commissar of nationalities Joseph Stalin had the Soviet Union designate the region as Azerbaijani territory, despite its majority Armenian population.

But beyond the disappearing outpost for worship, Azerbaijani actions—and rhetoric—threaten historic churches also.

The Ghazanchetsots (Holy Savior) Cathedral in Shusha, built in 1888, was struck twice by missiles early in last year’s war.

Azerbaijan stated the church originally belonged to the Russian Orthodox, saying it was subject to “Armenification.” It plans to return the church to its former shape—and owners.

But such actions are “cultural genocide,” said Davit Babayan, foreign minister of Artsakh. He and many Armenians believe Azerbaijan is pursuing a systematic campaign to erase their heritage from the region.

Cited as precedent is the destruction of more than 2,000 khachkars—ornately carved headstones from a Christian graveyard—in Nakhchivan, a non-congruous Azerbaijani enclave. A 2005 video depicts earlier efforts to wipe out historical evidence of Armenian populations there.

A January 2021 report from the office of the Human Rights Ombudsman of the Republic of Artsakh states that at least 1,456 Armenian historical, cultural, and religious sites are now under the control of Azerbaijan.

It lists khachkars, gravesites, and fortresses, and includes 161 monasteries and churches.

But for many of these, the Armenification accusation goes further. Many belong to the ancient Caucasian Albanian people, says Azerbaijan. Unrelated to the modern nation of Albania in the Balkans, this ancient Christian people are said to be the original inhabitants of Nagorno-Karabakh, before Armenians altered the region and laid claim to their heritage.

Today Caucasian Albanians are known as Udi, and Azerbaijan wants them to get their heritage back. 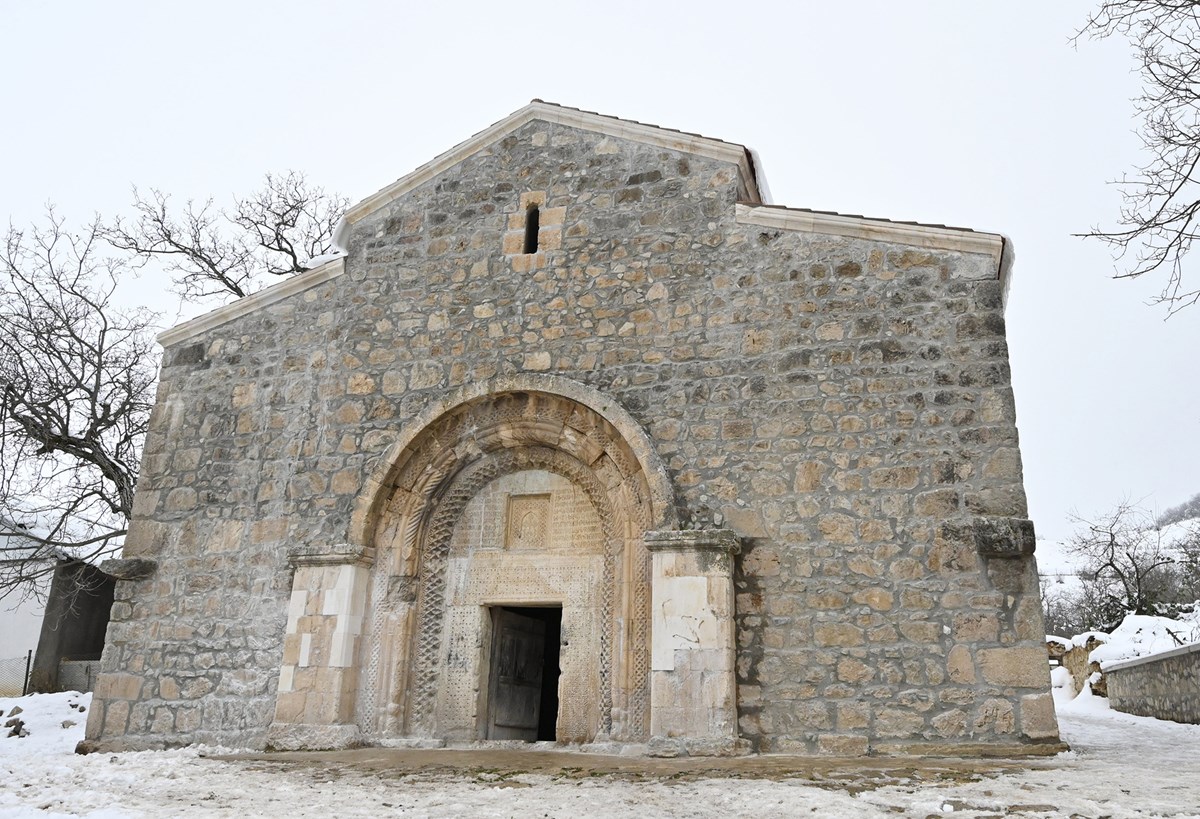 Image: Press Service of the Republic of Azerbaijan

Last month, Azerbaijan president Ilham Aliyev visited the Hadrut region of Nagorno-Karabakh. Filming for national television, he entered the 12th-century St. Astvatsatsin Church in the village of Tsakuri, highlighting the graffiti and general state of disrepair.

The Armenian inscriptions are “fake,” he said.

“If it was truly Armenian, would they be using it as [a] rubbish dump?” asked Aliyev. “This is our ancient history. This is our Udi friends’ church.”

He later visited a graveyard, accusing Armenians of falsifying tombstones.

Similar tombstones have since been vandalized, stated the US Commission on International Religious Freedom (USCIRF). Since 2013, USCIRF has listed Azerbaijan as a Tier 2 nation—now called the Special Watch List—for its practice or tolerance of violations of religious freedom.

Two soldiers have been arrested by Azerbaijan for the vandalization.

But video footage has also captured the toppling of a khachkar in Hadrut.

And video released by the Azerbaijani Ministry of Defense was stated to reveal the removal of medieval Armenian inscriptions in the famous 13th-century Dadivank Monastery. An Udi priest had previously been dispatched to conduct services there.

“Azerbaijan is trying to make Albania of equal value to Armenia,” said Ara Sanjian, associate professor of history at the University of Michigan–Dearborn and director of its Armenian Research Center, “and project today’s rivalry back into the past.

“I want to see evidence,” he said. “I can’t say it didn’t happen, but the onus is on the Azerbaijanis to prove otherwise.”

International academics find it difficult to examine all the historical sources. But Thomas de Waal, author of Black Garden: Armenia and Azerbaijan Through Peace and War, stated the Albanian theory has “little currency outside of Azerbaijan,” calling it “bizarre.”

Such disputes are typically settled through UNESCO, the United Nation’s cultural body. But working only through recognized states, the institution had no jurisdiction to chronicle religious heritage during Armenian occupation.

And since the war ended, UNESCO stated in December that Azerbaijan was not cooperating. In January, Aliyev threatened to revise relations with UNESCO, claiming it was acting with bias toward Armenia, failing to investigate damage during the occupation.

Last month, presidential advisor Hajiyev said Azerbaijan was ready to accept a mission. But as of publication, UNESCO told CT it was still in the process of discussion “in a spirit of consensus and strict impartiality.”

International organizations, such as the Metropolitan Museum of Art and the World Council of Churches, have called for preservation.

Johnnie Moore, a USCIRF commissioner, agreed, but put the onus on Armenia.

“The religious freedom community should also do a report on the desecration of Islamic sites during the years Armenia controlled the area,” he said.

“Christians cannot expect the world to stand against destruction of their religious heritage when we don’t stand against what others have suffered.”

In addition to hundreds of cultural sites damaged, Azerbaijan said more than 60 mosques had been destroyed. Another was turned into a pigsty. One in Shusha has been preserved, but labeled “Persian” after Iranian help in its reconstruction.

“They even tried to steal our mosque,” said Mushfig Bayramov, an Azeri convert to Christianity. “It is incredible how these people hate us.”

Sensitive to the suffering of both sides, Rima Nasrallah, assistant professor of practical theology at the Near East School of Theology in Beirut, has paid special attention to the monastery of Dadivank.

The threats reminded her of not only the destruction of Armenian heritage in Turkey, but also the losses of Arab Christians in the Middle East.

In conjunction with scholars and theologians from Germany, she signed a statement rejecting the destruction of cultural heritage and its “ideological reinterpretation,” especially in service of a political agenda.

“Where monuments have been destroyed or changed, part of our Christian story was lost,” Nasrallah said.

“These are not just random halls for weddings and baptisms; they are sacred spaces where people have met God and felt his presence.”

Aliyev has pledged to protect these churches—and give them to the Christians of Azerbaijan. Though Udis appear to be the beneficiaries, Aliyev stated that Armenians are free to remain in what he now calls “Karabakh,” dropping the “mountainous” descriptor that signaled Armenian-populated areas.

Azerbaijan issued postage stamps that appear as if an exterminator is spraying the region of Nagorno-Karabakh.

And a Military Trophies Park was opened in Baku, the nation’s capital, in which Aliyev walked through an exhibit of helmets taken from slain Armenian soldiers.

While these images and violations have received abundant coverage in Armenian media, mainstream publications have been more cautious. Though USCIRF and the BBC are starting to notice, Armenians simply grow more frustrated.

Many put their hope in God.

“As the civilized world continues to turn a blind eye, Azerbaijan’s greatest strength is in denial,” said Leonian, who directed the Artsakh ministry of the Armenian Missionary Association of America for 17 years.

“But God’s patience is limited, and one day the nations will open their eyes.”