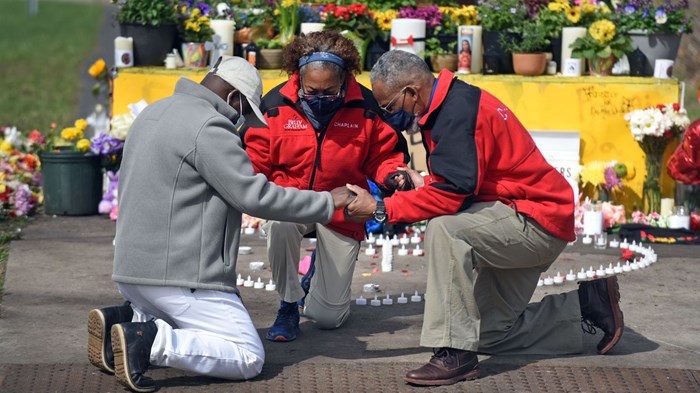 Less than a year after ministering at a memorial to George Floyd in South Minneapolis, chaplains Robert and Frieda Roulds returned to the Twin Cities last week to offer spiritual care in the aftermath of another black man’s death at the hand of police.

The husband-wife team arrived in Brooklyn Center, Minnesota, three days after Daunte Wright was fatally shot by an officer during a traffic stop. At a memorial erected at the site of the incident, emotions were high as they heard tearful mourners recount their experiences with racism and ongoing frustration with law enforcement.

“They don’t realize that it’s one grief after another after another,” Frieda Rounds said. “They are carrying a lot with them.”

The Rouldses, from Illinois, are two of five chaplains deployed to Minnesota by the Billy Graham Evangelistic Association (BGEA)’s rapid response team. This is the eighth time in its 20-year history that BGEA has sent chaplains in response to situations it deems “civil unrest,” most of which stem from police killings.

Though their ministry focuses on temporary emotional and spiritual care after a crisis, they’ve returned to the same area for the second time in just under a year and ended up recognizing some of the same people from before.

Minneapolis has endured so much trauma—COVID-19 restrictions and deaths; George Floyd’s death; the murder trial of former officer Derek Chauvin, who is accused of killing Floyd; and now Wright’s death—that the chaplains say people don’t know where to start process everything that’s happened over the past year.

“If you haven’t resolved one grief or trauma, you can’t move forward and deal with the one you’re in right now,” said Frieda Roulds. “You still have one that’s holding on to you that you need to deal with.”

The Rouldses were invited by Revive Brooklyn Park Church to support ongoing response efforts by local clergy, who have mobilized amid recent gatherings and protests. With a temporary curfew issued by the Brooklyn Park mayor, many churches have canceled weeknight activities.

Pastor McKinley Moore of Jehovah Jireh Ministries, a Church of God in Christ congregation in Brooklyn Center, said his community is distressed and worried and that people need support from clergy. He organized afternoon prayer meetings in front of the Brooklyn Center Police Department building and at the site of Wright’s killing.

“It helps when pastors from neighboring communities come in to assist,” said Moore, who has lived in Brooklyn Center for 29 years. “We appreciate that.”

But it’s more complicated when people arrive from out of state, he said. People from the outside may not understand the community divisions, tensions, and lingering frustrations they’re stepping into. Local pastors have the benefit of knowing their neighborhoods and being there to offer spiritual care and assistance long-term.

The BGEA chaplains see their work as temporary, as a way to help ministry leaders at a time when they may be stretched for capacity. They recognize that doing so in these in “civil unrest” situations is a particular challenge compared to arriving after a natural disaster or other types of crises.

“When there’s a disaster, there’s loss and grief. But with civil unrest we’re hearing and seeing a lot of people who are angry,” said Robert Roulds. “There’s no other grief components; we’re just dealing strictly with anger.”

Before going out for the day, he leads the group in prayer for God to lead hurting people to them and their message. “Give us eyes to see, ears to hear, and a heart for the people in this community,” he prayed.

Because tensions run high, chaplains are trained to watch people closely before approaching to ask how they are holding up.

“It takes a greater wisdom on the part of the chaplains to know how to navigate through this type of ministry event and to stay focused on our mission, which is to be a ministry of presence and to share the hope we have in Christ as a solution to the problems that we face as individuals and society,” wrote Ken Dunlap, the team’s manager of deployment and peer support.

Race is also a major factor in the two police killings and the community response. The Rouldses, who are coordinating the ministry in Brooklyn Center, are African American. Frieda Roulds recalled last year how seeing children afraid of what was happening in their community made her think back to growing up in Birmingham in the civil rights era and being afraid that her family would be targeted with violence.

BGEA has an extensive church network that connects chaplains to communities in need after a crisis, and its goal is to work in partnership with churches so that support efforts can continue even after the chaplains leave.

Josh Holland, assistant director of the BGEA rapid response team, said sometimes BGEA will send in chaplains at the request of an individual church, but not always. “The primary factor for us is when an event exceeds a community’s ability to respond, and we have chaplains who are available to come along the local church,” he said.

The Rouldses and their team came to Minnesota at the request of Mark Henry, lead pastor of Revive Church in nearby Brooklyn Park.

Robert Roulds prayed with the church last week on Facebook Live and shared about their work, saying even people who look like they’re doing fine on the outside are often really grateful to have someone offer to pray for them. They also attended Revive’s services on Sunday to meet with anyone from the church who needed counsel or care.

The ministers—who show up on site wearing shirts, jackets, and hats designating them as chaplains—also hope to ease tensions by hearing out and honoring citizens’ concerns. Robert Roulds described how the Brooklyn Center Police Department building is barricaded by National Guard troops while protesters stand on their own on an opposite corner.

“The residents see one-sidedness and protection for police but not for residents. They feel like their voices are not being heard, and there’s a lot of frustration,” Robert said. “That’s why we are here: to be a ministry of presence and to let them know the world is not against you.”

About 70 Minnesota clergy across faith traditions came out to the police department on Thursday night in solidarity with protesters seeking justice for Daunte Wright, and Brooklyn United Methodist Church has assembled a team to stand guard during nightly protests to protect businesses, apartment complexes, and homes from violence.

BGEA chaplains work with the community during the day, but their training has taught them to not engage in conversations with rioters. Robert Roulds said rioters are fueled by their anger and a sense of hopelessness, so during the night chaplains “pray and ask God that the solution will be peaceful and there will be no more harm.”

He shared with the Revive congregation an encouragement from Galatians 6:9: “Let us not become weary in doing good.” While his team will be there for two weeks, the deeper work of lament, healing, and reconciliation will take place in the months and years ahead.

Besides Minnesota, BGEA chaplain teams have been deployed this year to a COVID-19 field hospital in California; sites of devastating ice storms in Texas and tornadoes in Georgia; the Boulder, Colorado, neighborhood where a gunman killed 10 people at a grocery store; and now the FedEx facility in Indianapolis where a gunman killed eight people and wounded several others on April 15.

Crisis Chaplains Return to Minneapolis After ...