In Turkish-controlled northern Cyprus, another Andrew Brunson-style case is brewing.
Jayson Casper|April 23, 2021 06:00 AM 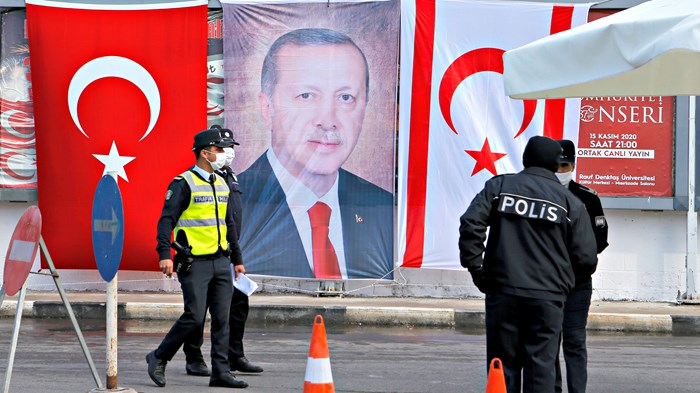 Image: Alexis Mitas / Getty Images
Turkish Cypriot police stand before a portrait of Turkish President Recep Tayyip Erdogan on November 15, 2020 in the disputed coastal quarter of Varosha in Famagusta, during his state visit to the self-proclaimed Turkish Republic of North Cyprus.

Will the Turks create another Andrew Brunson?

On the Mediterranean island of Cyprus, they claim to have found his disciple.

Three months ago, American pastor Ryan Keating was detained for 11 hours by the self-proclaimed Turkish Republic of Northern Cyprus, a state unrecognized by every nation except Turkey. Its police raided the café and wine shop that housed his church, and then proceeded to his home.

They confiscated dozens of Arabic and Farsi language Bibles.

Keating, 44, was released on nearly $20,000 bail, after local friends bonded deeds to their property, vehicles, and even a tractor.

Last month, Keating was charged with illegally importing Christian materials. His passport has been confiscated while he awaits trial. A fine has been assessed of at least $60,000—ten times the value of the Bibles, which he said is “wildly inflated” to begin with.

The raid, however, was based on the accusation that he did not have a permit to make wine. Yet Keating showed CT his 2018 license to operate the café, his 2019 license for winemaking from the municipality, and the additional requested paperwork from 2020, when his permit renewal was delayed by the customs department.

The interrogation focused only on his ministry.

“This country, its government, and our neighbors have been friendly to us,” he said. “But there are not insignificant pockets of hostile nationalism.”

“My case is an example of localized opposition,” Keating said. “But now, Turkish-style politics is being enforced in Cyprus.”

He was the victim of such politics once before. 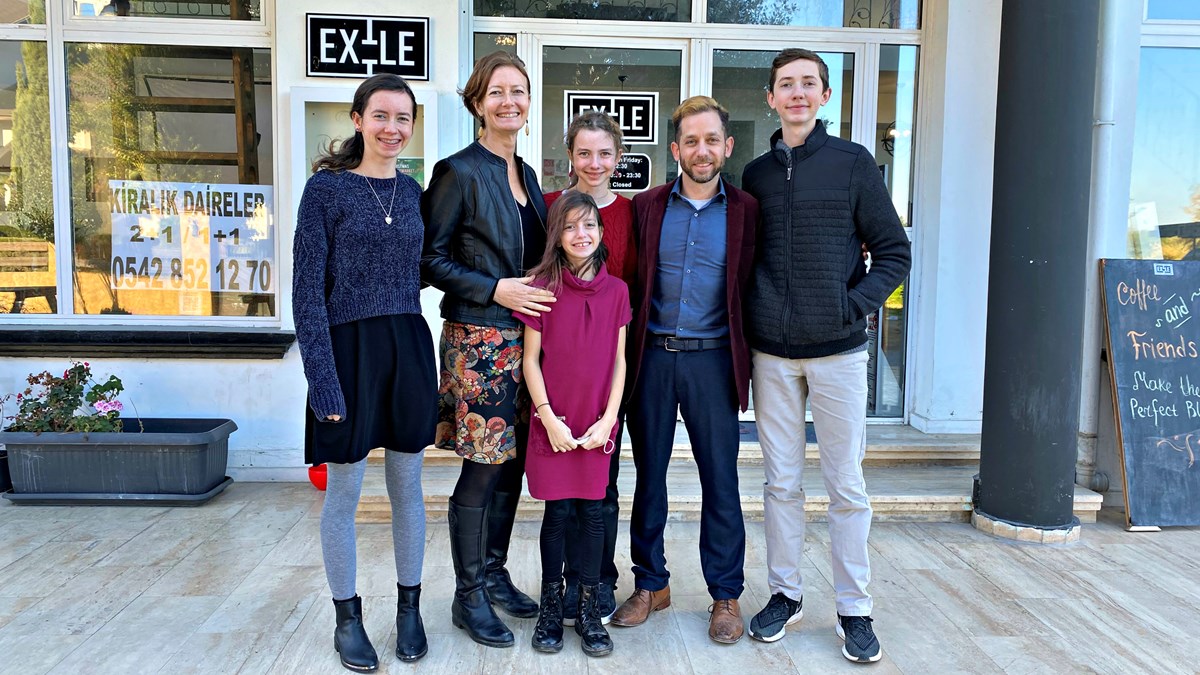 Pastor Ryan Keating and his family

Resident on the island since 2017, Keating previously lived 10 years with his wife and four children in Turkey. Operating a coffee shop, the Yale University graduate was also pursuing doctoral studies at Ankara University while heading a refugee ministry sponsored by a Protestant church.

In 2016, following the arrest of Andrew Brunson, Keating was deported on the grounds of “national security” and banned for life.

Since then, the Turkish Association of Protestant Churches has documented at least 35 examples of other foreign workers barred from Turkey. Most try to keep out of the media in hope of legally reversing the rulings against them.

So far in Cyprus, Keating faces only a fine. But a prominent Turkish-language newspaper conveyed the same conspiracy-focused accusations he said he faced during interrogation.

It called him a “disciple” of Brunson.

Keating told CT he did not work with the American pastor. But he did tweet on Brunson’s behalf and defended him in an interview with the BBC.

George Ioannides, an elder in the Greek Evangelical Church in Nicosia, a divided city and capital of the Republic of Cyprus, agreed that Keating was likely the victim of shifting politics in the occupied north.

“Ryan is sensitive to the culture, knows the language, and makes himself available to serve, wherever there is a need,” Ioannides said. “But his history in Turkey likely triggered his arrest.”

The birthplace of Barnabas, the biblical “son of encouragement,” Cyprus has been divided since a 1974 coup attempt by Greek Cypriots prompted an invasion by Turkey. Overall, it has a population of roughly 1.3 million.

The Republic of Cyprus and its 840,000 people are 89 percent Greek Orthodox, with a 2 percent Muslim minority. The occupied north is 97 percent Muslim, divided between original Turkish Cypriots and Turkish settlers—violating Geneva Convention restrictions on population transfer.

A United Nations peace process, which established a religious track in 2011, collapsed in 2017. But it helped achieve a 2013 agreement for Greek Orthodox and Muslim leaders to freely cross the 110-mile Green Line that divides the island. And there has been a recent uptick in northern facilitation of access to Christian sites, guaranteed by the 1975 Vienna Agreement.

But the preservation of religious heritage remains a point of strong contention.

“Some churches have become mosques, others are used as stables or for military purposes, while some of them are totally destroyed in the effort to obliterate any sign of the traditional Christian identity of the land,” stated Metropolitan Vasilios, head of the diocese of Constantia–Ammochostos. “After all, this has been the tactic of Turkey throughout its whole history with regard to the lands [it] conquered.”

According to the New York–based Orthodox Order of St. Andrew, more than 500 churches and chapels have been desecrated or destroyed in the occupied territory, with over 60,000 artifacts illegally transferred abroad.

The interfaith Religious Track of the Cyprus Peace Process (RTCYPP), now under the Swedish embassy in Nicosia, has noted violations. It has urged the authorities to restore the churches of St. James and St. George in the Nicosia buffer zone—repeating a call first issued in 2014.

In the south, the RTCYPP condemned vandalism last year against the Köprülü Mosque in Limassol, where anti-Muslim and anti-refugee graffiti was scribbled on the wall.

In the north, it recently condemned a Muslim charity’s use of St. Michael Church as a bazaar, as well as a techno party held in the 11th-century Armenian monastery of St. Magar. The latter is in dire need of repair.

A Protestant church has also been violated. Turkish Cypriots turned the Armenian Evangelical Church in occupied Nicosia into a factory and defaced its cornerstone inscription of a Bible verse. The building is now left derelict, overgrown with weeds.

Hrayr Jebejian, head of the Bible Society of the Gulf and an Armenian Cypriot citizen, is “saddened” to see the state of the churches. The Bible Society of Cyprus is attached to Greece and does not have any official presence in the north. He said doing so would recognize the entity.

A source in the Bible Society said that the Cyprus office can provide whatever materials are needed, but that it cannot deliver everywhere. It would be the customer’s responsibility to carry the materials onward.

Turkish Bibles were not seized in the raid on Keating’s church, though some were taken from his home. The Arabic and Farsi materials were dropped off by a friend who no longer had use of them. But it was the box’s mailing label from the south, he said, which likely caught the attention of the police.

Keating said Bibles are not available for sale anywhere north of the Green Line.

But other Christian resources were mailed directly to his church, he said, passing through Turkish customs without any assessment of fees. He is convinced the charges against him are just a pretext by a minority of officials offended at Christian witness.

Keating’s church hosts two services, one in English and the other in Turkish. The diversity is evident in both, with people from Cyprus, Central Asia, Iran, Iraq, and Europe attending—which demonstrates the need for Arabic and Farsi Bibles.

Before COVID-19, the Turkish language service hosted up to 40 people weekly, including a handful of Turkish Cypriots. The English service has about 70 members.

While the Republic of Cyprus calculates there are 314 Greek Orthodox and 69 Maronites resident in the occupied territory, the Cyprus Evangelical Alliance (CEA) lists two affiliated churches in divided Nicosia and nearby Kerynia.

These are pastored by Kemal Basharan, a 69-year-old Turkish Cypriot. In 2014, he established the Turkish Protestant Association after a 10-year legal battle with the authorities. He counts 300 believing families in the Turkish area, though many are fearful to publicly identify with the church.

Basharan has received death threats, but maintains his witness. Amid the local controversy of Turkish president Recep Tayyip Erdogan’s strong support for Quran courses in schools—which the Turkish Cypriot Supreme Court ruled was unconstitutional—Basharan wrote an article in the newspaper to ask if Bible courses could then be permitted.

“If I get locked up somewhere, who will know about it?” he said, describing his affiliation with the CEA. “I wanted to join something good, and it was an open window to the outside world.”

While the northern administration is officially secular, it recognizes only Islam as an official religion. And though it does not regulate the worship of other faith groups, it requires such groups to register with the police as associations in order to open bank accounts and engage in civic activity.

Basharan believes the authorities are treating Keating “like a drug dealer,” yet he makes certain to import his own Christian materials through Turkey—and pay an approximate 10 percent customs fee.

Though he has faced interrogation for doing so, Basharan said there is even greater opposition to Christianity since the presidential elections.

Keating is not the only one targeted. A Turkish Christian and his American wife were fined at the airport for bringing in religious materials. They moved to Cyprus after the wife was denied her residency permit after 10 years of living in Turkey. Two months later, Turkish Cypriot authorities gave them five days to leave the country.

“They didn’t like it, but they had to allow it,” said Basharan. “Now with Erdogan and the new government, the swords are out.”

By contrast, the Republic of Cyprus recognizes Maronite Catholics, Armenian Orthodox, and Roman Catholics as official churches in addition to the Greek Orthodox and Muslim faiths. Others must register as associations or foundations. The CEA represents 36 congregations before the government.

“There is freedom; we can worship God without any trouble,” said Ioannides. “But for Ryan all we can do is pray, as our word does not register in the north.”

Yiannos Pitsillides, president of the CEA, told CT that evangelicals face “subtle yet strong” social discrimination, especially from the older generation. But the number of member churches has more than doubled in the past two years, as leaders have come to value greater relational unity.

And though the alliance recognizes the sensitivity involved in having relations also with Turkish Cypriots, they respectfully pursue it as a Christian calling.

“We believe that the love of Christ surpasses race, ethnicity, and any other humanly imposed barriers,” said Pitsillides. “We hope to be an example of reconciliation among Greek and Turkish Cypriots.”

Cyprus, meanwhile, finds itself increasingly contested in Mediterranean politics. Allied with Israel, Greece, Egypt, France, and the United Arab Emirates, it has negotiated natural gas rights in its offshore areas. Meanwhile, Turkey has forged a cooperative maritime zone with Libya.

And Erdogan has bucked the UN peace process in Cyprus by calling for a two-state solution. The defeated Turkish Cypriot president favored a federal compromise and has accused Turkey of interfering in the election.

Is Keating, like Brunson, a casualty of geopolitics or the victim of localized bias? Either way, he expresses optimism in the objectivity of the court system, through which he hopes Cyprus can avoid the fate of Turkey.

“I have had much freedom here,” he said.

“But I am going public with my story because I don’t want it to become a precedent.”