The university alleges the former president manipulated the board to create a “safety net” for himself while anticipating the backlash of his marital scandal and Trump support.
Bob Smietana – Religion News Service|April 16, 2021 12:32 PM 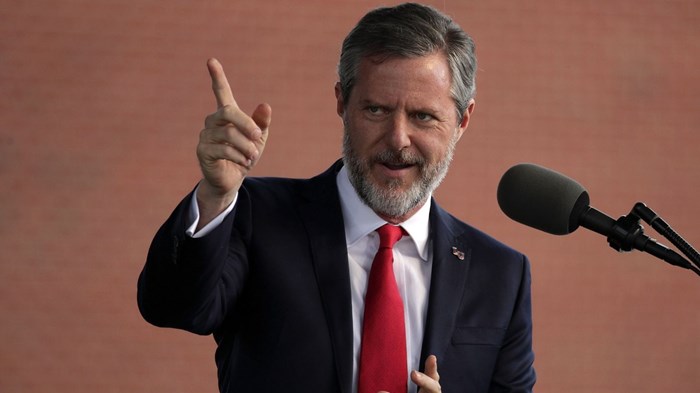 Liberty University, one of the nation’s largest Christian universities, is suing former President Jerry Falwell Jr. for $10 million, citing a breach of contract and a conspiracy to mislead the university’s board.

Falwell, son of Liberty founder the late Rev. Jerry Falwell Sr., resigned as Liberty’s president in August 2020 after years of controversy due to his support of Donald Trump and allegations of misconduct.

A complaint in the lawsuit, filed in a Lynchburg, Virginia, circuit court, claims Falwell “fashioned a deceitful scheme to manipulate the Executive Committee of Liberty” while negotiating his last contract.

The complaint also states Falwell created the so-called Granda plan to conceal his family’s relationship with Giancarlo Granda, a young man the couple had met while vacationing in Florida. Granda has claimed to have had a long-term sexual relationship with Jerry Falwell Jr. and with his wife, Becki Falwell. The Falwells have denied that claim but have admitted that Becki had an affair with Granda. The couple also bought a Miami beach youth hostel in 2013 that Granda managed and also had a share in.

The complaint claims Falwell devised a plan to cover up the relationship, fearing Granda would make it public, and that Granda asked Falwell for payoffs in order to keep racy photos of Becki Falwell out of the public eye.

“Most damaging, Falwell Jr. knew that Granda would be able to provide details about the fact of the affair with Becki, its duration, Falwell Jr.’s role in abetting it, the attendant circumstances of the affair, and the specific activities in which Granda, Falwell Jr. and Becki engaged in during the affair.”

Rather than telling the board about Granda, Falwell hid it from Liberty’s board, according to the complaint. Falwell also became concerned his high-profile support of Trump would backfire and might cost him his job.

Then, in 2019, he negotiated a new employment agreement with the board, which included a raise and a more favorable severance if he were fired. The complaint claims Falwell continued to conceal his dealings with Granda while trying to create a “safety net” for himself.

Falwell’s actions clashed with the school’s moral code, known as the “Liberty Way”—which requires faculty and administration to agree to a statement of faith and to adhere to “biblical standards of morality,” including strict rules limiting sex to within a heterosexual marriage.

The school’s president was expected to be “a standout spiritual leader for the college,” according to the complaint.

The suit seeks $10 million in damages and a return of any Liberty property still in Falwell Jr.’s possession.

Falwell Jr. did not immediately respond to requests for comment.