Korean Missionaries Gather to Exhort the Next Generation and North Korea

More than 700 participate in first Korean World Missionary Fellowship convocation to be held within Korea.
J. Y. Lee|August 9, 2021 06:00 AM
한국어 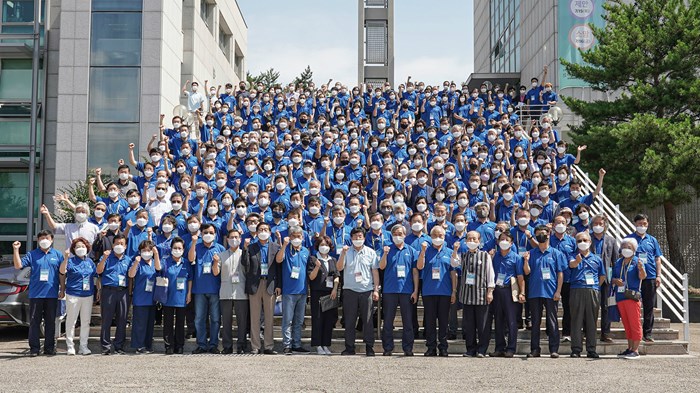 More than 20,000 missionaries belong to the Korean World Missionary Fellowship (KWMF), which last month held its first convocation hosted in Korea after decades of convening in the United States.

Despite the pandemic postponing the quadrennial event, the hybrid gathering cohosted by evangelical Handong Global University in the port city of Pohang drew 300 missionaries in-person and 400 virtually from 75 nations.

There was a tone of urgency among senior missionaries at the decline of a Korean missions movement that once sent the second-highest number of missionaries in the world. “We need to view our mission with a new perspective and engage in our work with more diverse approaches,” KWMF Chairman Choi Keun-bong, who has worked as a missionary in Kyrgyzstan for 28 years, told CTS News. “If we do not do so, we may enter a time when it would be hard for missions to survive.”

The three-day convocation, served by 300 mostly student volunteers, featured numerous panels and workshops on Korean missions as well as opportunities for fellowship. The days were long, kicking off with revival prayer meetings at 6:30 a.m. and wrapping up with worship services at 10 p.m.

Among the key themes of the convocation were North Korea, generational transition, and educational ministry. On the last day, the three came together in the Pohang Statement, translated from Korean into English, Spanish, and Chinese [further explained here].

For the first time in its history, the KWMF published a code of ethics for missionaries and a public call to emancipate from North Korea six South Korean Christians currently held captive from four to eight years [see sidebar below].

“We declare, as Korean missionaries, that we have the special duty and calling to bring forth reconciliation and evangelization in the Korean Peninsula,” the group stated. “We call for the protection and release of the unduly detained Christian workers in North Korea.”

Although Pyongyang—once called the Jerusalem of the East—seems impervious to foreigners today, Handong awarded an honorary doctorate to an Egyptian Coptic Christian businessman during the convocation partly to help liberate the detained Christians.

Orascom CEO Naguib Sawiris lifts up Romans 8:31 (“If God is for us, who can be against us”) as his favorite Bible verse, and the billionaire has invested $250 million in North Korea to provide telecommunications services to its six million citizens. “It is my faith in God that is the source of my courage,” he told the Handong community in an interview, and he committed to strive for the release of the six detained Christians.

The other recipient of a Handong honorary doctorate at the KWMF event was Reuben Torrey IV, who was recognized for his American family’s four generations of missionary service in East Asia.

The patriarch, R. A. Torrey, was a superintendent of Moody Bible Institute who led revivals in China and Japan in the first decade of the 1900s. His son, R. A. Torrey II, became a missionary in China, where R. A. Torrey III was born. Torrey III grew up in Pyongyang, helped re-establish Anglican Sungkonghoe University in Korea, and founded Jesus Abbey in the eastern mountains of Korea in 1965.

Torrey IV continues to serve at Jesus Abbey, which has become a vibrant ecumenical community visited by some 10,000 Christians every year.

South Korea has long sent the most number of missionaries after the US—an impressive feat for a young nation of 52 million whose Christians numbered less than 1 percent of the population in 1900. But during the past decade, its number of missionaries has been surpassed by larger nations such as Brazil and China. The KWMF convocation regularly discussed this “inflection point” in Korean mission history.

“Handong has a thousand children of missionaries as students,” university president Chang Soon-heung told CTS News. “We hope that young people would gain a new heart for mission after this convocation.”

The gathering provided an opportunity not only for Handong students and other volunteers to learn from the participating missionaries, all of whom had served for at least five years, but also for the missionaries to replenish themselves and receive the support they sometimes lack in their mission fields.

“During the last evening’s worship, I felt the presence of the Holy Spirit and sensed that sovereign God would use this convocation as an inflection point for a new era of mission,” said Jang Ho-jin, a graduating student at Handong International Law School who volunteered as a vocalist with the law school’s praise band. “Children danced to our songs on stage, and missionaries of all age sang and danced together which made us feel united as one.”

For four months leading up to the convocation, Handong surveyed Korean missionaries to explore the myriad challenges they face. About 60 percent of the 300 respondents stated they are in need of psychotherapy or counseling; 70 percent had encountered legal problems in their mission field; and 90 percent did not have a retirement plan. In response, Handong offered counseling and legal support booths throughout the convocation, and announced a plan to build a residential community for retired missionaries next to its campus.

The last KWMF convocation, which gathered 971 missionaries and 4,500 clergy and lay participants, was hosted in 2016 at Azusa Pacific University in California after the first seven convocations took place at Wheaton College in Illinois, beginning in 1988. The location of the next convocation is still undecided.

“If I were the president of Wheaton or Azusa, I’d want to host the next KWMF convocation as it was such a gem and a blessing,” said Won. “This convocation will be relevant not only for Korean mission, but also for world mission as we innovate on what we have learned from Western missionaries to move from ‘West to the rest’ evangelism to ‘[global] South-to-South’ cooperation.”

The KWMF convocation was welcomed by leading pastors and seminary presidents in Korea. Leaders at Yoido Full Gospel Church, the world’s largest congregation, and at Soongsil University and Presbyterian University and Theological Seminary, founded by American missionaries more than a century ago, were among the two dozen Christian leaders who sent congratulatory videos.

“I believe that the mission work will not diminish after the pandemic,” said Onnuri Church senior pastor Lee Jae-hoon, whose church came to the rescue of Handong when the university founded in 1994 faced financial challenges during its early years. “With God’s wisdom beyond our imagination, we will be better equipped for the commission to witness the gospel.”

Profiles of the six South Korean Christians detained in North Korea and advocated for by KWMF (provided by HGU):

2) Choi Chun-kil: Pastor arrested and detained since December 2014 and sentenced to “indefinite compulsory labor” in June 2015. Official reason for his detainment is “anti-DPRK espionage activities under the manipulation of the US and puppet South Korea.”

3) Kim, Jung-wook: Pastor arrested and detained since October 2013 and sentenced for life in 2014, for establishing a noodle company which ran humanitarian aid projects and a North Korean ministry in Dandung, China, that offered food, medicine, and shelter.

The official reason for the detainment of each is “anti-DPRK espionage activities under the manipulation of the US and puppet South Korea.”

4) Ko Hyon-chol: Arrested in May 2016 while crossing the Amnok River to help orphan girls escape from North Korea to an island located near the river. Current status unknown.

5) Kim Won-ho: Abducted on the Chinese side of the border in March 2016. Current status unknown.

6) Ham Jin-woo: A reporter abducted in May 2017 while reporting on the Chinese side of the China-North Korea border between Sanhe and Longjin. Before he fled North Korea, he worked in its General Bureau of Reconnaissance managing intelligence operations targeting South Korea and Japan. He obtained South Korean citizenship in 2011 and worked as a reporter at Daily NK, a South Korean media outlet which specializes in North Korean news. He also helped missionaries that helped North Korean people. Current status unknown.

[ This article is also available in 한국어. ]

Korean Missionaries Gather to Exhort the Next Generation and North Korea

Korean Missionaries Gather to Exhort the Next ...