Fate of Lalibela Rock Churches Raises Concerns Among US Ethiopians 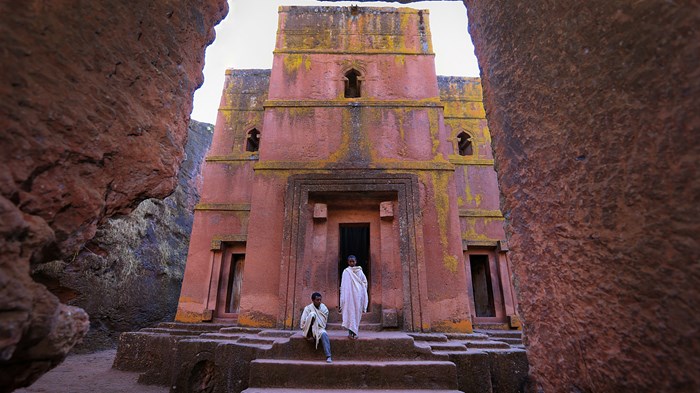 The fate of the ancient rock-hewn churches of northern Ethiopia has become a grave concern for Ethiopian Americans, as a civil war between the government of Prime Minister Abiy Ahmed and Tigray rebels imperil the fate of many religious sites across the country.

For months, Ethiopian troops have fought a rebellion by the Tigray People’s Liberation Front (TPLF), which began after TPLF forces attacked an Ethiopian military installation in early November 2020. Tensions had risen after Ahmed’s government withheld funds for elections held in Tigray province in defiance of federal COVID-19 restrictions on gatherings.

In recent weeks, the TPLF forces have captured the town of Lalibela, in the northern Amhara region, the site of a cluster of some of Christianity’s oldest houses of worship. The Lalibela churches were carved by medieval Ethiopian Christians as an alternative pilgrimage site to Jerusalem, whose geography the complex loosely follows.

“The recent military intrusion of the TPLF into Lalibela threatens the home of the ‘New Bethlehem,’ where 11 rock-hewn churches built in the 12th century are still places of worship today,” said a longtime analyst of the region.

The churches are also a favorite with foreign tourists to Ethiopia. “We call on the TPLF to protect this cultural heritage. We also call on all parties to the conflict to end the violence,” the State Department said in a statement following the seizure of Lalibela on August 5.

The churches were declared a UNESCO World Heritage Site in 1978. Ironically, that designation came during the height of the Ethiopian Civil War, which pitted a number of rebel groups against the Communist dictator Mengistu Haile Mariam.

“My heart is broken for us Ethiopians in America and around the world. Our life is dismantled,” said Kesis Asteraye Tsige, an Ethiopian priest in Kansas City. “Everybody is wounded, sad, and lamenting. We don’t know what will happen to this site now that it is not controlled by the government … If [the TPLF] are Christians, they shouldn’t do this.”

Asteraye Tsige, who leads Debre Sahel Medhanie Alem Ethiopian Orthodox Tewahedo Church, said the fall of Lalibela marks the first time the government of Ethiopia has acknowledged the risk to Ethiopian cultural heritage posed by the rebellion. Tsige said he had heard rumors that some churches were damaged in the fighting.

He urged the government of Ethiopia to ensure the protection of holy sites.

In November, the government of Ethiopia accused the TPLF of destroying an airport in the holy city of Axum, where Ethiopian Orthodox Christians believe the Ark of the Covenant is stored. Also under the control of the TPLF is the Negash Amedin Mosque, the third-oldest in Africa, which was reportedly damaged in December in fighting between Eritrean and TPLF forces.

Fate of Lalibela Rock Churches Raises Concerns Among US Ethiopians