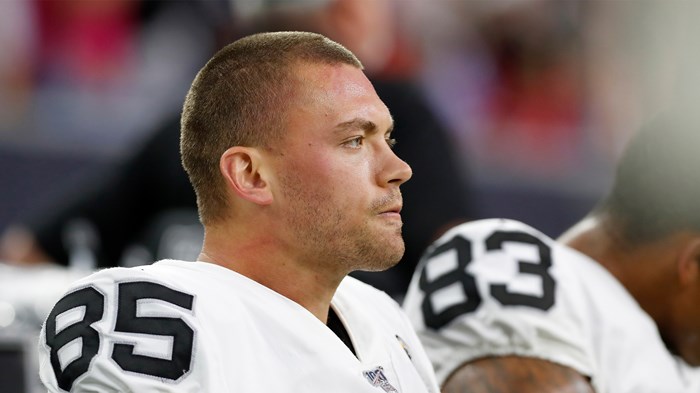 Derek Carrier, a tight end for the Las Vegas Raiders, and his wife Dora Carrier were regular listeners to RZIM podcasts and gave the ministry $30,000 in January 2020.

They supported RZIM’s mission to “touch both the heart and the intellect of the thinkers and opinion-makers of society with the truth of the gospel” and trusted the integrity of the ministry’s leadership. They didn’t know that Zacharias had owned multiple spas where he sexually abused employees and had been credibly accused of preying on women in multiple countries.

Now the Carriers say they believe Zacharias and the leadership of RZIM “misrepresented the true nature of their ministry and the use of funds donated in support of their stated purpose.” Ravi Zacharias’s estate, administered by his widow Margaret, is also named as a defendent.

The lawsuit, filed in Atlanta on Thursday, asks the federal court to certify the Carriers as representatives of a class of donors harmed by RZIM. According to their lawyers, the class would include people like the Carriers who gave large sums to support apologetics, but also donors who gave $5, $10, or $100.

“I would imagine the vast majority of donors gave under $100,” Kim Johnson, an attorney representing the Carriers, told CT. “Nobody is going to file a claim for $100. Nobody can bear the costs of going to court for such a small amount. A class action allows us to represent all the donors and hold this ministry accountable for what was really a sham.”

Sarah Davis, who replaced her father as head of RZIM a few months before he died in 2020, did not immediately return CT’s request for comment.

In March 2021, after releasing a report on the investigation confirming Zacharias’ history of sexual abuse, Davis announced that RZIM would reorganize as a grant-giving ministry, distributing funds to other groups focused on defending the truth of the gospel and caring for victims of sexual abuse. The RZIM board released a statement apologizing to donors and others for failing to “ensure the accountability of Ravi Zacharias.”

According to the independent investigation paid for by RZIM, Zacharias used tens of thousands of dollars of ministry funds dedicated to a “humanitarian effort” to pay four massage therapists. One of the women said after she received the financial support, Zacharias demanded sex.

The ministry has an estimated $30-$45 million but has not reported donations to the Internal Revenue Service since it reclassified itself as a church in 2015. At the time, it was receiving about $25 million in gifts annually.

RZIM and Ravi Zacharias’s estate will have the opportunity to file motions to dismiss the class action suit. If the case goes forward, the court will consider whether there is a legally acceptable class of plaintiffs and start the discovery process.

The Carriers are seeking a jury trial and asking for compensatory, consequential, and punitive damages.

The Nevada-based Christian couple became supporters of RZIM after years of listening to the ministry’s podcasts, including the daily program “Just Thinking” and the weekly “Let My People Think.” In November 2019, they heard Zacharias asking for $300,000. He explained the ministry, with 93 speakers in 15 countries, required donor support.

“If you seek the mind of the Lord and ask him what he will have you give, I am sure we can meet that goal,” Zacharias said. “Without givers like you, our ministry would not be able to continue reaching those around the globe with the gospel.”

Zacharias was stepping down from leadership at that time but assured podcast listeners that the work would continue with their support.

The Carriers prayed about it, and decided to give part of their tithe to the ministry. They sent their $30,000 gift at the start of the year.

Derek Carrier has been outspoken about his faith on and off the football field, frequently sharing his testimony and telling groups of teens why he believes faith and family are greater than football.

“I do everything as if it’s worship,” he once told his hometown California newspaper. “At the end of the day, I kind of just leave it and say, ‘Whatever the outcome is, your will be done, not mine.’”