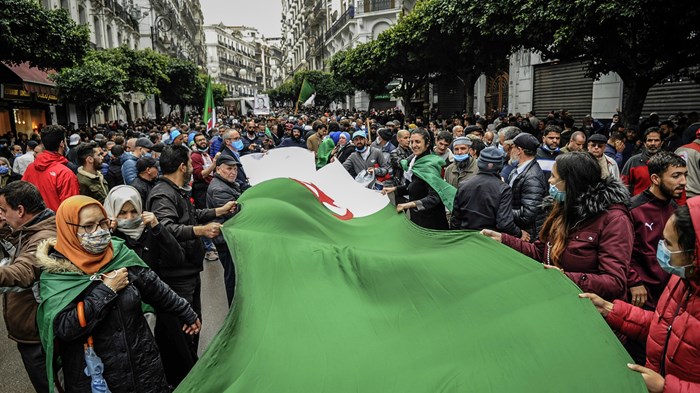 Image: STR / picture alliance / Getty Images
People in Algiers wave a big Algerian flag during a protest held today to mark the second anniversary of the mass demonstrations, commonly known as the Hirak Movement, that pushed long-time ruler Abdelaziz Bouteflika out of office in April 2019.

Algeria’s Christians hope that a one-two punch may reopen their churches.

Last December, a letter from the United Nations asked the North African government to give account. And this week, popular protests resumed after crackdowns and a pandemic-related hiatus.

Two years ago, Protestants cheered when the Algerian Hirak (Arabic for movement) forced the resignation of then 82-year-old president Abdelaziz Bouteflika following his announcement that he would run for a fifth term in office. Protests continued, however, as the ruling clique was slow to make changes.

“Hirak supports human rights, and I have no doubt they will help the churches,” said Youssef Ourahmane, vice president of the Algerian Protestant Church (EPA). “And the letter from the UN shows something else is wrong, and now they will have to deal with it.”

The seven-page missive’s language reads like a teacher scolding a recalcitrant student.

“Please explain in detail the factual and legal basis that justified the closure of the 13 places of worship and churches,” stated the letter, written in French. “Please provide information on the re-registration procedure of the [EPA], and explain the reason why this has not been finalized to date.”

Signed by three UN experts specializing in the freedom of religion and belief, peaceful assembly, and minorities, the now-open letter represents the latest chapter of international advocacy for the persecuted Protestants of Algeria.

The nation ranks No. 24 on the Open Doors World Watch List of the most difficult countries for Jesus followers. Only three years ago, it ranked No. 42.

“2020 was a very difficult year for us Protestants, who have been deprived of our places of worship,” said Salah Chalah, president of the EPA. “[But] we love our country and we regularly pray for its prosperity.”

Algerian Protestants number between 50,000 and 100,000 believers, with the great majority concentrated in the Atlas Mountains region populated with Kabyle, a non-Arab indigenous ethnic group.

Besides the 13 churches forcibly shut down, the UN noted 49 other Protestant places of worship threatened with closure. It also rebuked the “physical force” used against church members, as well as discriminatory treatment against Christians in airports and other border crossings.

In 2018, the Algerian government denied Christians were persecuted, stating churches were closed for “nonconformity with the laws.”

But in October 2019, Chalah was one of several kicked and beaten with batons while protesting the closure of the Full Gospel Church of Tizi-Ouzou, 60 miles east of the capital, Algiers. Three hundred of the congregation’s 1,200 members gathered in solidarity as 20 police officers sealed the doors of what was understood to be Algeria’s largest church.

“May everyone know that we have been beaten and abused for one reason only—our Christian faith,” Chalah said at the time. “And because that’s the cause of our pain, we’re proud of it.”

The EPA was founded in 1974 and officially recognized in 2011. But while a 2006 ordinance guaranteed non-Muslims the protection of the state, it also stipulated that worship can be conducted only in buildings approved for that purpose by the National Commission for Non-Muslim Religious Groups.

To date, not one church has received permission.

Ourahmane, age 65, has been a Christian for over 40 years. Earlier in his ministry, the security forces told him the church was free to do whatever it wanted—except mass street evangelism campaigns.

Bouteflika was an autocratic secularist of sorts, far warier about Muslim threats to his rule. In 2015, for example, 900 illegal mosques were shuttered, with 55 kept under surveillance. Much of his popularity was won by ending a decade-long civil war that began in 1992 after the military overthrew the democratically elected Islamic Salvation Front.

But as the president aged without a clear plan of succession, the authorities were left vulnerable to pressure. Ourahmane believes that pressuring churches is simply one of many cards the government uses to stay in power.

It was Angela Merkel of Germany, he said, who intervened to win the EPA’s 2011 registration.

Continuing a Western bid for legitimacy, amendments to the constitution in 2016 strengthened the right to practice religion. But needing to shore up its religious credentials, one year later the government campaign began against Protestant churches. Three were reopened in the second-largest city of Oran, however, following complaint by the US ambassador.

But the Hirak movement likely pushed the government to reestablish conservative popular support, resulting in the current total of 13 church closures. And although COVID-19 restrictions have been removed for mosques and some foreign-populated Catholic churches, no Protestant congregations have been permitted to open.

It is unclear if the Algiers government is calculating correctly.

According to a new Arab Barometer survey, 3 in 4 Algerians believe freedom of expression should be guaranteed, and 2 in 3 believe democracy is always the preferred system of government.

But in terms of religion, there is less clarity. An Arab Barometer survey two years ago found that while 44 percent of Algerians believed their country would be better off with more devout people in government, 43 percent believed religion is a private matter that should be separate from public life.

And though only 42 percent said that religious leaders should have some influence over public policy, this figure has risen from 23 percent in 2011, when the Arab Spring began.

The anniversary of the Hirak movement is February 22, and in advance the government dissolved parliament, called for new elections, and released 60 detained activists as part of its pledge to implement protester demands.

But its earlier efforts to do so fell flat.

President Abdelmadjid Tebboune was elected amid little fanfare and Hirak rejection. And a new constitution—that removed guarantees for freedom of conscience—passed by a 2–1 margin, but with only 15 percent turnout amid a Hirak boycott.

Ourahmane believes there is strong support for Christian freedom among the Kabyle, who comprise 5 million of Algeria’s 40 million population. And while maybe 10 percent of Arab Algerians would actively support their rights, most would not be concerned either way.

But if the US pressed Algiers for the full components of human rights—including religious freedom—he thinks Algerians would even support the imposition of sanctions.

Wissam al-Saliby, UN advocacy officer for the World Evangelical Alliance (WEA), warns unilateral action is not the solution. Sanctions are a stick, while he says the carrot of diplomatic, economic, and security cooperation could be better utilized by the world’s liberal democracies on behalf of human rights.

To further such consensus, last year the WEA, EPA, and the World Council of Churches scheduled a side event at the Human Rights Council meetings in Geneva, Switzerland. Cancelled by COVID-19, it would have received the personal attendance of the UN special rapporteur for freedom of religion and belief, Ahmed Shaheed.

A similar letter from the UN to Algeria in 2018 went unanswered.

“Algeria is a country of concern,” Shaheed told CT after the cancelation, mentioning both Christian converts and heterodox Muslims. “The state must ensure that all communities can freely practice their faith and provide the legal status necessary for effective functioning.”

The WEA also wrote a letter on behalf of Algerian Protestants and has been at work in Geneva to alert diplomats to the issues involved. Having Shaheed’s endorsement, as well as heavyweight advocates like Amnesty International and Human Rights Watch, raises the churches’ case significantly.

Even the European parliament, whose political parties are sometimes wary of religious freedom issues, took a stand.

Despite UN and civil society pressures, he said, there has been insufficient diplomatic pressure by governments to encourage Algeria to reverse course.

At least this time they answered the UN, though the response is not yet public.

“I would like to ask all Christians in the world to continue to pray for us,” said Chalah. “But I also want to reassure them that the flame of our faith is always lit.”

As it is for Ourahmane, waiting to see how God will work.

“I have no doubt that one day the church in Algeria will have total freedom,” he said. “God can use different means to do this—whether the UN, or Hirak.”