In-depth study of the faith of 8,660 black Americans offers an unprecedented snapshot of their congregations and beliefs before COVID-19 and George Floyd.
Jeremy Weber and Morgan Lee|February 16, 2021 11:15 AM 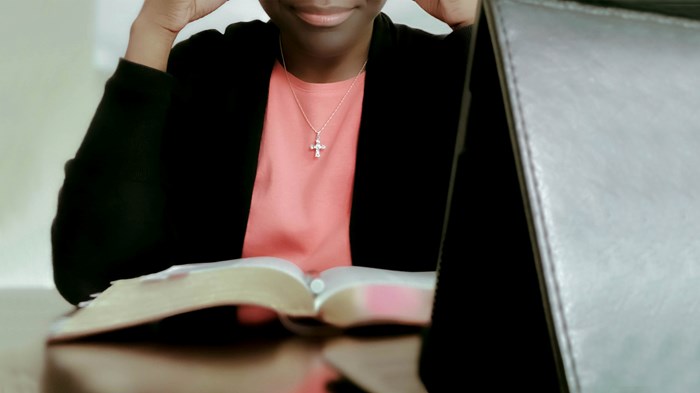 Black Americans remain more religious than other Americans, according to a massive new survey. Yet fewer are attending or seeking out predominantly black churches.

Two-thirds of black Americans identify as Protestants, but only 1 in 4 of these identify with historic black denominations.

Yet retention is strong: 3 in 4 black adults have the same religious affiliation as when they were raised (significantly higher than the rate for Americans at large), while 1 in 4 black Americans who were raised as unaffiliated or as Catholic now identify as Protestant.

Note: Pew defined black churches as “those where the respondent said that all or most attendees are Black and the senior religious leaders are Black.”

These are among the findings of “Faith Among Black Americans,” released today by the Pew Research Center. The study is Pew’s “most comprehensive, in-depth attempt to explore religion among Black Americans” ever, comprising both a national survey of 8,660 adults who identify as black or African American as well as guided small-group discussions and interviews with clergy.

“Many findings in this survey highlight the distinctiveness and vibrancy of Black congregations, demonstrating that the collective entity some observers and participants have called ‘the Black Church’ is alive and well in America today,” stated Pew researchers.

“But there also are some signs of decline, such as the gap between the shares of young adults and those in older generations who attend predominantly Black houses of worship.”

The fact that the black church isn’t declining as fast as the white church is not cause for celebration, says Mark Croston, national director of black church partnerships for LifeWay Christian Resources.

“An 81 percent retention rate may be a good number in business, but not for the church,” he said. “The gospel is relevant and needed in every generation. We have to make sure we are ministering it in ways that will cause it to connect with people we are missing.” 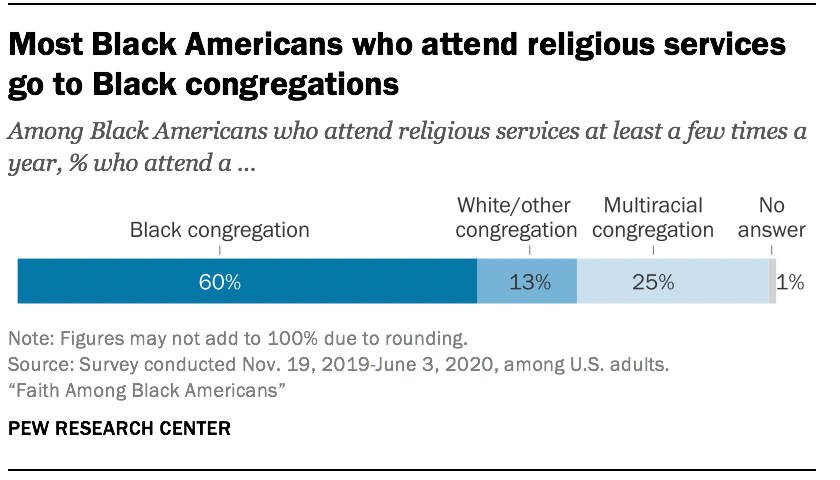 Most respondents were surveyed between January 21 and February 10, 2020, before COVID-19 disrupted church life and before protests against police brutality became widespread after the death of George Floyd.

Pew also surveyed 4,574 adults who do not identify as black or African American, in order to draw comparisons.

Overall, Pew found that black Americans are more likely than Americans at large to believe in God, attend religious services, say religion is “very important” in their lives, and affiliate with a religion.

“One might observe that Black churches have done well with spiritual nurturing the Black community through historic tough times and with fighting social and political injustice but not as well with pursuing an ecclesial vision for racial/ethnic inclusion,” said Antipas Harris, the president of Jakes Divinity School. “As a result, more white-led, multicultural churches are drawing Black millennials and Gen Zers into movements that do not have a clear or full vision for social and political racial conciliation necessary to transform a continued racist society into greater diversity, equity, and inclusion.” 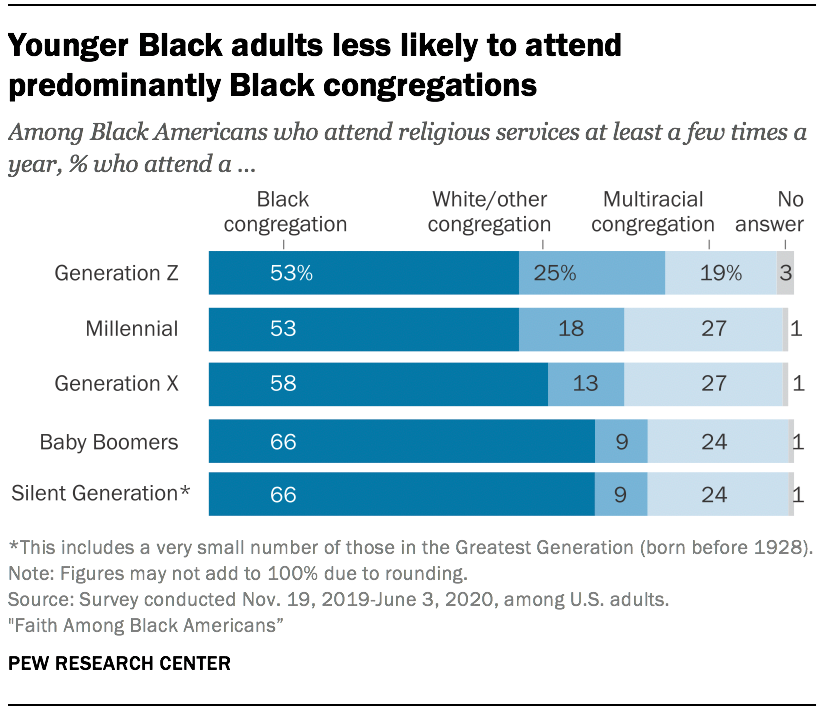 Only 1 in 4 black Protestants identify with one of the eight historic denominations that compose the Conference of National Black Churches. Larger shares identify with evangelical or mainline denominations (30%) or offered a vague descriptor such as “just Baptist” or “just Pentecostal” (32%). The remainder said they were nondenominational (15%).

And while black “nones” are growing—now comprising almost 1 in 5 black adults (18%)—most of the unaffiliated still credit black churches with improving racial equality (66%) and more say that black churches have too little influence in society (35%) than too much influence (19%).

However, 6 in 10 of all black adults agree that “historically Black congregations should diversify” (61%). And those who worship at black (61%), white/other (66%), or multiracial (62%) congregations agree slightly more than those who seldom or never attend (60%).

“It is important to note that ‘multicultural’ generally means ‘monoculture with multicolors’ since most of the churches that fit this description tend to be white-led churches that have attracted blacks and not the other way around,” said Jeff Wright, the CEO of Urban Ministries.

The dominant culture’s “expectation” of “unilateral assimilation,” is something that Jacqueline Dyer, an associate professor of social work at Simmons University, has also noticed.

“I have had conversations with clergy who are noticing that in the wake of COVID-19, George Floyd and political unrest some Black church members in predominantly white churches are leaving to return to the Black Church,” she said. “The departing Black members are feeling disenfranchised.”

A continued one-way migration threatnes the gifts the black church offers not only to the black community, but to the Body of Christ as a whole, says Oneya Okuwobi, a researcher who studies the sociology of organizations, race, and religion.

“If we lose the spiritual heritage of the Black church as people and resources flow to other expressions, we will all be impoverished in the process,” said Okuwobi.

Meanwhile, 6 in 10 of all black adults agree that when church shopping, finding a new congregation where most attendees share their race would be “not too important” or “not at all important” (63%). A majority of those who worship at black congregations agree (58%), though they are less likely to do so than those who attend white/other (75%) or multiracial (69%) congregations or those who seldom or never attend (65%). 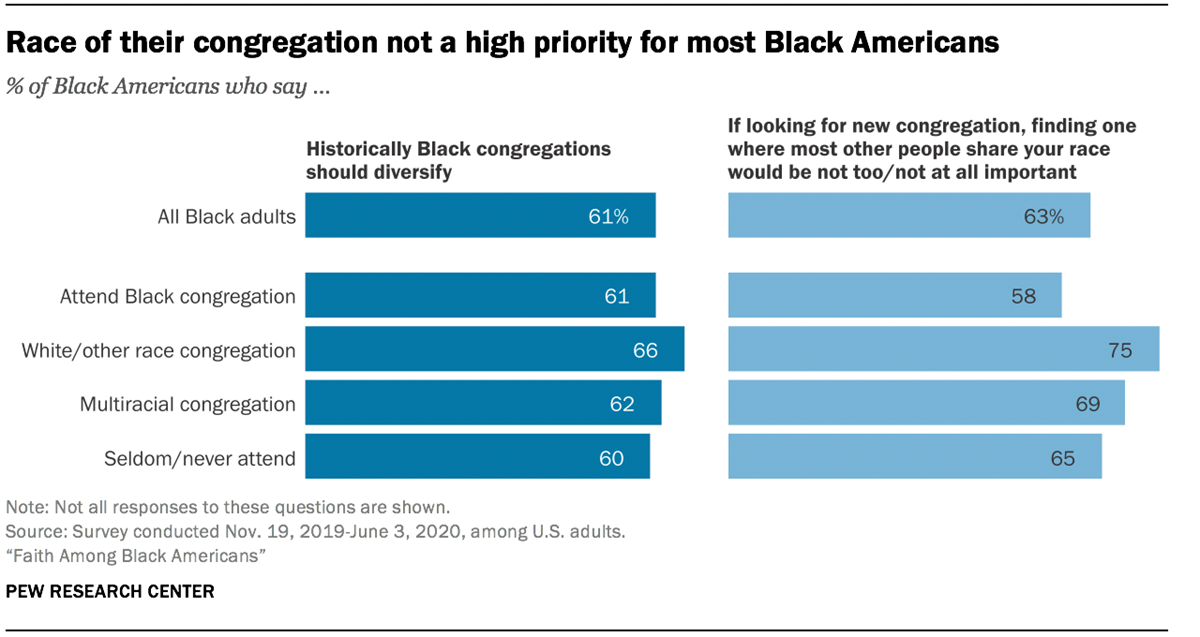 Despite these sermons, in the wake of the pandemic and last year’s racial injustice protests, “it became clearer that, while the black church still has a role, it is no longer the driving force for social justice,” said Harris, who also serves as associate pastor at the Potter's House of Dallas. “The onslaught of economic crises and the increase of food deserts challenged mere food pantries and homeless dinners and Saturday lunches. There is a need for a new model of doing church to sustain the essence of the black church spiritual, social and political involvement in social transformation.”

Although church teachings actively address racial injustice, “Protestants who go to Black congregations are somewhat less likely than others to have recently heard a sermon, lecture or group discussion about abortion,” stated Pew researchers. 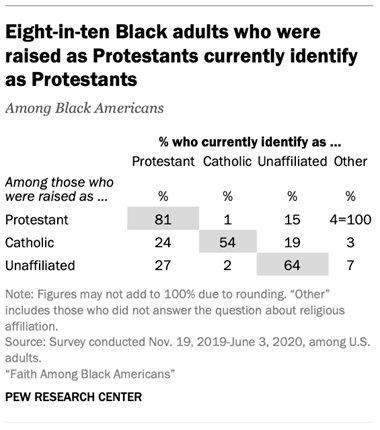 “This suggests that predominantly black churches focus less on Christian doctrine and spiritual formation and more on social justice issues. The two should not be mutually exclusive.”

“The Black Church does well in preaching about ‘big’ issues of race, criminal justice, and economic disparities,” said Quonekuia Day, an instructor of Old Testament and biblical Hebrew at Gordon-Conwell Theological Seminary. “However, issues that impact the individual and families (which eventually impact the community), such as abortion, mental health, domestic violence against women and men, do not receive adequate attention.”

Beyond particular sermon topics, many black churches also boast a “distinctive atmosphere for worship.” A full 9 in 10 black Americans who attend services at least yearly say their congregation includes “calling out Amen or approval” (89%). Then 6 in 10 say there is dancing, jumping, or shouting; 5 in 10 say there is speaking in tongues; and 4 in 10 say all three take place.

“Taken as a whole, about half of congregants who attend Black Protestant churches [51%] report that the services they attend feature all three of these practices at least some of the time, compared with roughly a quarter of Black Protestants in White or other race churches [27%] and 18% of Black Catholics,” stated researchers.

According to Pew’s small-group discussions, researchers noted, “Black Americans suggest that these distinctive characteristics may be more important than the churches’ racial makeup itself for explaining the continued appeal of these congregations.”

In addition to these distinctive characteristics, Okuwobi has observed that black congregants in multiethnic churches are more likely to experience racial discrimination, feel as though they have to give up parts of their racial/ ethnic identity to fit in, and struggle to build relationships.

“I’ve seen Black congregants retreating to ethnic affinity spaces where they can express their pain in a supportive community. This retreat has occurred as congregants consider leaving their multiracial churches for Black ones or have created Black spaces either within the multiracial church or on their own,” said Okuwobi. “...If younger generations continue to increasingly attend white and multiracial churches, pastors and leaders have a responsibility to make these congregations places of safety for them. Likewise, pastors and leaders of Black churches will have to make room for their leadership to attract and retain them.”

The stickiness of these particular characteristics will be tested in the coming years. Most of Pew’s research was conducted prior to the pandemic and the George Floyd protests. Harris believes that the pandemic will hurt long-term local church attendance and that millennials and Gen Z’s close relationship with technology will encourage people who do engage, to do so remotely.

But Vince Bantu, assistant professor of church history and black church studies at Fuller Seminary, believes that the events of the last year will lead to an opposite outcome. 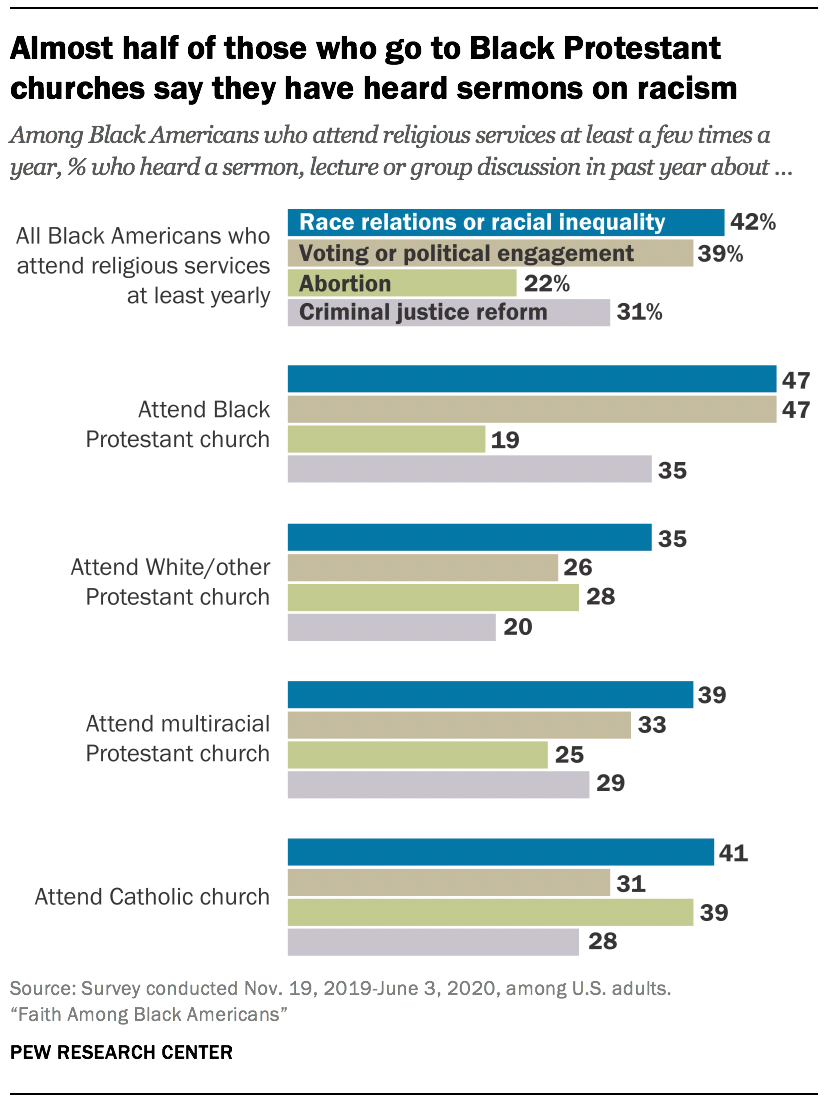 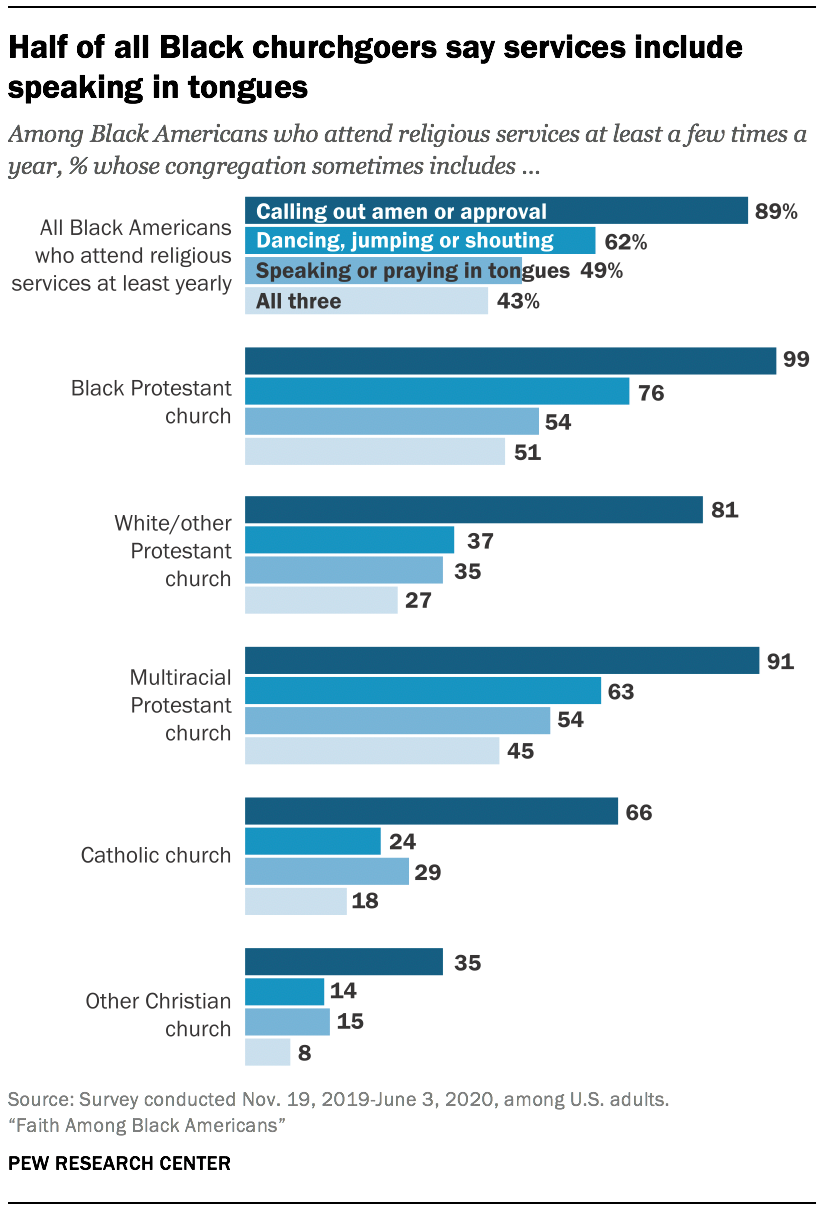 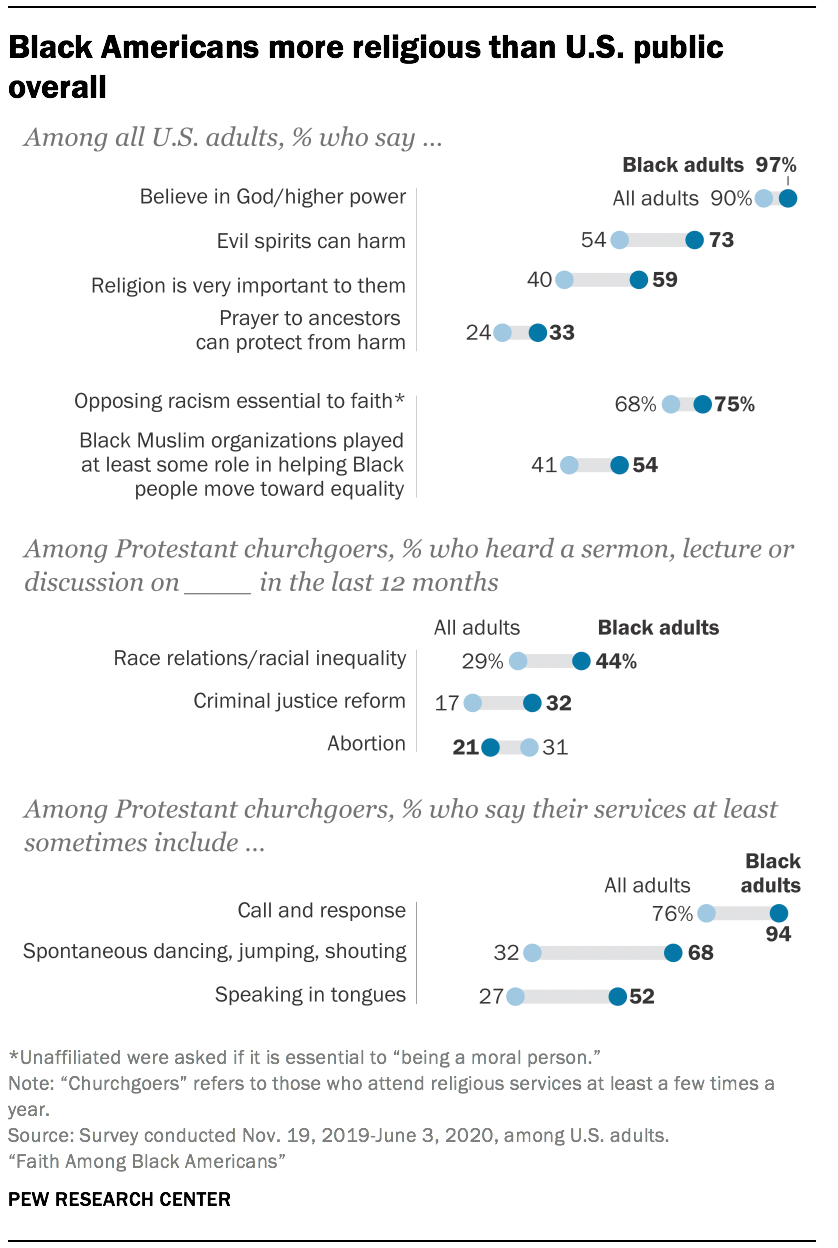