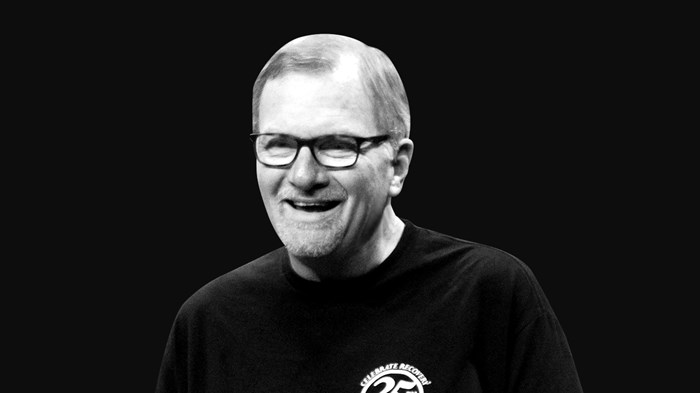 Celebrate Recovery founder John Baker, who turned his testimony recovering from alcoholism into a biblical 12-step program used by more than 7 million people, died unexpectedly on Tuesday at age 72.

Baker’s ministry began in 1991 at Saddleback Church in California and has spread to 35,000 churches nationwide over the decades. Celebrate Recovery is credited with helping destigmatize addiction among evangelicals and opening the church up as a safer place for recovery.

“Thirty years ago John Baker turned the ruins of his life over to Jesus Christ and God transformed him from a driven businessman with an addiction to alcohol, a failing marriage, and alienated children to a Christ-follower with a passion to help others with their ‘hurts, habits, and hang-ups’ through the principles of recovery,” wrote Kay Warren, cofounder of Saddleback Church and a mental health advocate. “There is simply no way to put into words how I love John and will miss this kind, creative, brilliant and faithful man.”

Evangelical leader Johnnie Moore, whose family previously belonged to Saddleback Church when living in California, remembered Baker’s commitment to “saving the lives of the people whom God loves.”

“He became a doctor of hope for those whose lives were caught in vicious cycles of guilt, shame, and failure. With God’s help, he showed again and again that those cycles can be broken,” he said. “Pastor John was never content just to save souls. He wanted to also save lives, now. It isn’t just the impact he had on individual lives but on all of those who loved those who decided to walk into a Celebrate Recovery meeting.”

Baker was raised in Collinsville, Illinois. He shares in his testimony that he grew up a believer in a Baptist church but struggled with feelings of unworthiness. He partied in college at the University of Missouri and as an officer in the air force, and his drinking habit grew as his career in business took off in his 30s.

Eventually Baker considered himself a “functioning alcoholic,” turning his back on God and separating from his wife. When he hit his bottom, he began attending daily AA meetings, working through the steps, and finding hope in a God who loved him unconditionally.

His efforts to make amends to his wife, Cheryl, as part of the 12 steps led to him attending Saddleback Church with her, hearing Rick Warren preach, and renewing their marriage vows in a span of months.

He wrote out a vision for what would become Celebrate Recovery’s own version of the 12 steps, each one paired with a teaching from Scripture, and shared it with Rick Warren back in 1991. As the story goes, Warren replied, “Great, John—go do it!” and the program soon launched at Saddleback.

Baker went on to study at Golden Gate Baptist Seminary and serve at Saddleback as volunteer, staff member, pastor, and elder as Celebrate Recovery grew across denominations and ministry networks.

At Saddleback, it became the top outreach ministry, with 70 percent of participants coming from outside the church.

“John touched more people with the healing power and grace of Jesus Christ than anyone else that I have ever known personally and one of those lives was mine,” wrote Celebrate Recovery’s national director and national training coach Mac and Mary Owen.

Celebrate Recovery roots the 12 steps in biblical principles, and its final step charges participants to use their recovery to spread the good news.

“This program is not something that you complete and then all of sudden, ‘Hey, I’m better. See ya,’” Baker said. “They’re always there to help somebody if they’re struggling. They know that it worked for them, and that’s the greatest story they have.”

The ministry has also expanded to serve the incarcerated, as the program became adopted by state prison systems in New Mexico, California, and beyond. Prison Fellowship president James J. Ackerman collaborated with Baker to add Celebrate Recovery Inside to its curricula.

“John was a great leader, and he will be greatly missed, but the impact of his faithful obedience will go on for generations,” Ackerman wrote in tribute. “I take comfort in the thought that as John enters the presence of his Lord, he will hear the words, ‘Great, John—you did it!’”

Baker is survived by his wife and Celebrate Recovery cofounder, Cheryl; children Johnny and Jeni Baker and Laura and Brian Gibney; and their grandchildren.