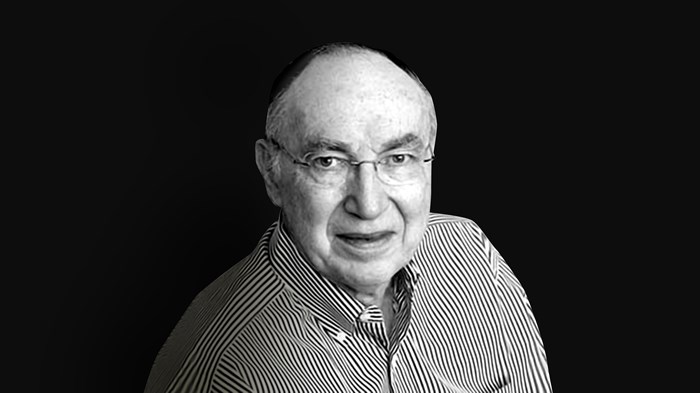 Hershel Shanks, the founder and longtime editor of Biblical Archaeology Review, died on Friday at the age of 90.

With his popular bi-monthly magazine, Shanks trumpeted the latest discoveries at digs across the Holy Land, promoted (and sometimes prompted) fierce archaeological controversies, and tirelessly advocated for public access to the latest scholarship.

Shanks had no credentials in archaeology, biblical studies, or the ancient Near East. He was a lawyer. He nonetheless did more than anyone in recent memory to stimulate biblical archaeology.

“He has a gift—a journalist’s eye, as it were—of spotting hidden nuggets within the world of arcane academic scholarship,” said Eric H. Cline, professor of classical and ancient Near Eastern studies at the George Washington University. “He winnowed wheat from chaff and brought topics, ideas, and new discoveries to a much larger audience of interested readers.”

In scholarly terms, Shanks made the technical research “accessible” to an educated public. But Shanks’s core insight was that the main obstacle between an eager public and academic scholarship was the scholars themselves. The insight was not always appreciated by professional archaeologists.

“His tactic was always to overdramatize the topic and try to marshal public attention to pressure scholars (which usually worked),” wrote William G. Dever, archaeology professor at Lycoming College in Pennsylvania, in a special edition of the Review honoring Shanks in 2018. “Then he would turn to a new, perhaps even more sensational issue.”

Dever served on the editorial board for the Review, but noted he had to resign in protest several times.

“I recall saying once, ‘Hershel, get into epistemology. That’s the next big thing,’” Dever recalled. “Without blinking an eye, he replied, ‘Okay, but what’ll I use for illustrations?’”

Shanks was a born into a Jewish family in Sharon, Pennsylvania, in 1930. His father, Martin, owned a shoe store, and Shanks sold his first pair at 11 years old. He decided not to go into the family business, though, and after earning an English degree at Haverford College, he went to Harvard Law School and became a lawyer. Shanks worked in the Department of Justice for several years, and handled Appeals Court cases. Then he went into private practice in Washington, DC.

At 42, however, he took a yearlong sabbatical that changed his life. He decided to move to Jerusalem in 1972 with his wife, Judith, and their two young daughters, Elizabeth and Julia. Shanks planned to write a novel about King Saul, but instead spent the year visiting archaeological digs with his family.

By the time he was done, Shanks had a new passion. With the support of his wife, an editor at Time-Life books, Shanks decided to leave the law and launch the Biblical Archaeological Society and its magazine.

“I remember telling Hershel that no amateur could possibly understand and interpret the then-burgeoning and complex archaeological research in Israel in any sensible way,” Dever said. “Boy, was I wrong!”

Shanks started the magazine in 1975. Within 10 years, he was sending new issues to more than 100,000 subscribers. Nearly a third of his readers were evangelicals. Most of the subscribers were educated but, like Shanks, not academics. They were just interested in the new insights archaeology could add to their understanding of the context and world of the Bible.

Christopher Rollston, professor of northwest Semitic languages and literatures at the George Washington University, said he understood the reach of the Review when he visited his small hometown in Michigan. He spotted a copy in the local barbershop, and a guy at the lumberyard asked him questions about a recent article.

The biggest test of Shanks’s clout in the field came in the early 1990s, when he decided it was time to make the Dead Sea Scrolls widely available. Though the texts had been discovered in the 1940s, only bits and pieces had been shown to the public—or even to other scholars.

The academics in charge of the study of the scrolls were carefully guarding them until their own extensive research was published. The head of the research project said people who wanted access to the texts were “a bunch of fleas who are in the business of annoying us.” Martin Abegg, a graduate student, recalls being forbidden from sharing information about the scrolls with academics in the US.

Shanks thought this was dumb and persuaded Abegg to let him publish the “bootleg” version of the scrolls that Abegg had reconstructed by computer from a concordance of Dead Sea Scrolls words that was assembled in the late 1950s but kept secret outside of a small group of specialists.

A Preliminary Edition of the Unpublished Dead Sea Scrolls—The Hebrew and Aramaic Texts from Cave Four was published in 1991. TheNew York Times said it broke “the scroll cartel.”

The same year, Shanks convinced another scholar, Robert Eisenman of California State University, Long Beach, to let him publish a facsimile edition of photographs of scroll fragments he had secretly obtained.

Shanks was sued for copyright infringement and ordered to pay $40,000, but as Lawrence H. Schiffman, Hebrews studies professor at New York University, later wrote, “The lock had finally been broken.” The Israel Antiquities Authority appointed Emmanuel Tov the new head of the Dead Sea Scrolls research team, and scholars published “every scrap of parchment, including unidentifiable pieces” in the next 12 years.

In addition to his work on the magazine, Shanks authored more than a dozen books, including three on the Dead Sea Scrolls, two on Jerusalem, and one on the Temple Mount. He wrote a book on ancient synagogues and another on Jewish jokes, as well as an autobiography, where he briefly recounts his “subtle and complicated” relationship with the Bible and his own struggles reconciling the God of the Old and New Testaments with the pain and suffering he saw in the world.

According to Robert R. Cargill, who took over at the helm of the Review in 2018, Shanks’s great strength as an editor was that he never shied away from controversy.

“He asked tough questions,” Cargill wrote, “and if he didn’t like the answer, or if he felt that someone wasn’t being straight with him, he asked someone else. He welcomed dissenting opinions and often pitted them against one another so that his readers could witness the scholarly debates for themselves.

“That was Hershel’s other great strength: He knew his readers and fought for them passionately.”

Shanks, for his part, said the work was not as altruistic as it might have seemed.

“I didn’t look for the idea that I thought would interest the reader,” he wrote in his autobiography. “I proceeded from what interested me! Then my job was to make the public interested in what I was interested in. My excitement and enthusiasm no doubt helped me along.”

Shanks is survived by his wife, Judith, and his daughters, Elizabeth and Julia.