After Military Coup, It’s ‘Time to Shout’ for Myanmar Evangelicals 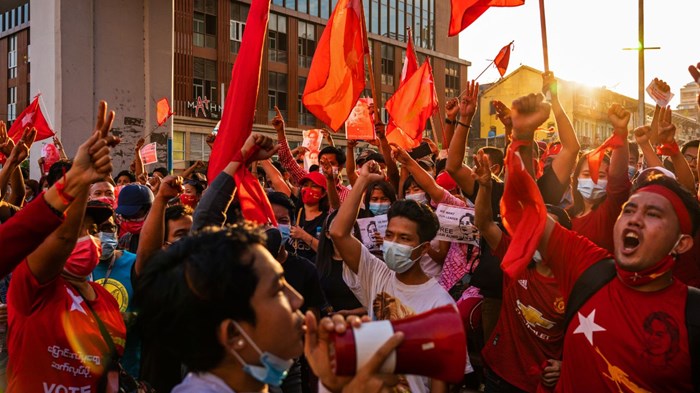 Evangelical pastors in Myanmar have taken to the streets alongside their Buddhist neighbors in the week since a military takeover, believing that God is on the people’s side and praying desperately for him to bring justice.

Amid nationwide internet and phone shutdowns, some churches gathering online due to the pandemic couldn’t connect to worship together last weekend, the first Sunday since the coup in the Southeast Asian nation formerly known as Burma. Hundreds of displaced Christians have been physically blocked out of their towns due to travel restrictions and roadblocks.

Ministries are scrambling to adapt so they can keep encouraging one another and ensure evangelism efforts don’t let up during another dark chapter in their country’s history.

“Our friends and relatives are unreachable, but they will not succeed in suppressing our voices,” said Michael Koko Maung, who leads a national network of church planters.

“On the ground, our brothers and sisters [believers] will continue their movement of peaceful civil disobedience, the drumming of pots and pans, peaceful mass marching demonstrations, and the chants of condemnation to the military. Abroad, we will let the world know that we are fighting back.”

Pastors in his network, Nehemiah Ministries, shared masked selfies of themselves crowded onto overpasses and holding signs at intersections as mass protests continued for a third straight day on Monday.

The unrest began a week before, on February 1, when the military detained civilian leader Aung San Suu Kyi, cut off communication and news networks, and put a commander in charge of the country. The move harkened back to decades of military rule and Suu Kyi’s historic fight as a pro-democracy activist.

The takeover exaggerates existing vulnerabilities for Myanmar’s Christian minority, according to Open Doors. In the past, the military government has upheld Buddhist culture and tradition to the extent that churches become subject to restrictions, one local pastor told the ministry.

Evangelicals make up just under 5 percent of the country’s population and are its largest religious minority. Despite the risk of retribution, some Christian institutions and individual pastors have spoken out. The Myanmar Evangelical Christian Alliance as well as an interdenominational Christian group in Mandalay, the second-largest city in the country, recently issued statements condemning the coup.

“The leaders in high positions in the church have the most to lose. If they are vocal, they and their denominations could be targeted for prison/house arrest, or the military could use deadly force as they have in the past and in many of the former leaders’ memories,” said Ellis Craft, Southeast Asia ministry director for the US-based missions organization Reach A Village.

“The churches that are growing the fastest in Myanmar like Nehemiah Ministries are nearest to the ground and are active in the communities,” said Craft. “It makes sense that they are the ones out there standing up to injustice.”

Maung shared with CT over Facebook Messenger that a small group of leaders were able to meet in his office in Yangon Monday to coordinate ministry activities. Since the coup, they have had to figure out how to get funds to pastors in the field while money transfer apps are down and make plans for continuing house worship in cell groups. (COVID-19 restrictions allow gatherings of fewer than 30 to continue to meet.)

Day by day, more of the network’s pastors have joined the protests. But more than anything, they continue to pray together. “Christians in Myanmar are not timid and coward, but Christians might fight with [their] greatest weapon, prayer and Jesus himself,” Maung wrote. “We also request all of you who sympathise [with] us, pray for us in this fight to overcome sin and Satan’s schemes.”

The recent unrest threatens internally displaced minorities within the country, such as “more than 500 believers, including missionaries, trapped in Kyaukkyi, in the Bago Region” without the aid they need, another local Christian reported to Open Doors. In Chin state, a part of Myanmar bordering India and Bangladesh, believers worry about possible human rights abuses as the military presence increases.

The coup compounds the suffering the citizens of Myanmar have known all their lives, leaders say. Christians, though, continue standing on the promises of God and the hope that he will hear their unceasing prayer just as the government hears the protesters filling the streets.

There’s been “time to pray, time to wait, time to keep silent,” said Maung. “But it’s time to shout.”

After Military Coup, It’s ‘Time to Shout’ for Myanmar Evangelicals