Proposed legislation would give 11 million a path to citizenship and prioritize keeping families together.
Bekah McNeel|January 21, 2021 11:20 AM 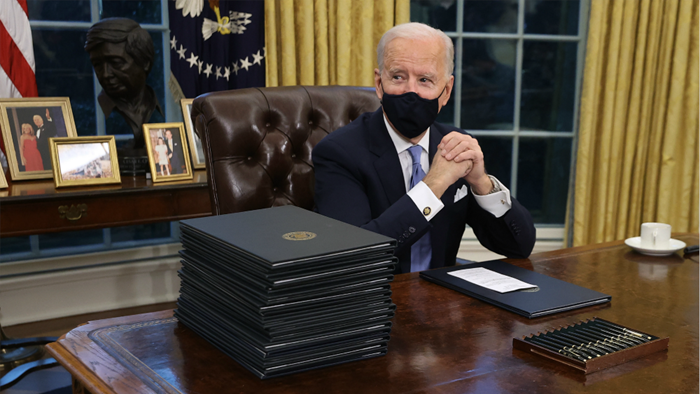 Evangelical advocates for immigrants and refugees were encouraged by President Joe Biden’s decision to send proposed reforms to Congress on his first day in office. Just hours after he was sworn in, Biden unveiled the US Citizenship Act of 2021.

“I see it as a positive sign,” said Matthew Soerens, national coordinator of the Evangelical Immigration Table. “The new administration is leading on this issue as a day one priority.”

Soerens and others have not yet reviewed the bill that will be sent to Congress but say the proposed legislation is the beginning of a long process toward much-needed reform.

According to the White House, the legislation is “centered on the basic premise that our country is safer, stronger, and more prosperous with a fair and orderly immigration system” and places a priority on keeping families together.

Biden’s plan represents a sharp U-turn after four years of strong opposition to immigration and a policy of making the process more painful, captured most vividly by the separation of thousands of children from their parents under a “zero tolerance” policy on illegal border crossings. Former president Donald Trump’s administration also took hundreds of other steps to enhance enforcement, limit eligibility for asylum, and cut legal immigration.

World Relief welcomes the change and said a reform bill could help the country live up to its ideals and values.

“We firmly believe that America has a moral imperative to welcome refugees, asylum seekers and other immigrants once again into our nation,” said CEO Tim Breene. “Our hope is that Americans, regardless of political party, will set aside their differences and come together to rebuild an immigration process that will reflect the best of American values and the biblical values that guide many Americans.”

The legislation proposes an eight-year path to citizenship for all undocumented immigrants currently in the country. They would first be given documentation—a work permit. Then, after five years of working, paying taxes, and not committing any crimes, immigrants would be eligible for permanent residency, or a green card. Three years after that, immigrants could apply for full American citizenship.

The legislation would also increase the use of technology to enforce security at the border and includes plans to address the root causes of the rising rates of migration from Central America.

Children who were brought to the US in infancy would be eligible for green cards immediately. Going forward, the US would prioritize family reunification when granting visas. Christian organizations have consistently voiced support for both approaches.

“As Christians in America, we should advocate for an immigration system that proves we love people like God loves people,” said Chris Palusky, president of Bethany Christian Services, which uses financial grants from the federal government to help shelter and settle unaccompanied minors.

Observers don’t expect the proposed Biden bill to pass through Congress without changes. There will undoubtedly be some pushing and pulling as legislators tussle over priorities.

Palusky is calling on the nation’s political leaders to seize this moment and come together in a constructive give and take.

“Congress and the Biden administration should make clear to the American people that finding common ground by reforming a broken, unjust immigration system benefits all of us,” he said.

While Democrats hold a majority in both the House and Senate, the legislation will still need some Republican support to pass. Alex Nowrasteh at the libertarian Cato Institute said that Biden’s proposals will undoubtedly see pushback, but the simplicity of the bill bodes well for an actual discussion.

“The good political part of this bill is that Democrats are finally playing hardball on immigration [and not] presenting legislation already laden with compromised positions,” Nowrasteh wrote. “Instead, they will start with a cleaner and simpler bill and then ask what other senators and congressmen need to get on board, which will no doubt be a lot of expensive security signaling along the border.”

During the Trump years, Americans grew more favorable toward immigration. Gallup polls show that in 2016, about 20 percent of Americans supported more immigration. By 2020, that number had climbed to 34 percent—higher than at any time since the polling firm first started asking the question in 1965.

The Associated Press reports that 71 percent of voters also support the idea of a path to citizenship for immigrants in the country illegally, compared to about 3 in 10 who prefer a program of deportation.

Many Republicans have moved more to the right on the issue, however, prioritizing border security to the exclusion of everything else. Some conservatives, including Senator Josh Hawley and Senator Tom Cotton have already indicated they will oppose Biden’s plan if it doesn’t include increased funding for immigration enforcement.

But since Biden proposed this bill on the first day, the politicians have time to work things out, Soerens said. He will be “watching, praying, and advocating” for progress, in hopes that both sides will come to the legislative process in good faith, with the goal of achieving real reform.

Samuel Rodriguez, head of the National Hispanic Chrisitan Leadership Conference and a former Trump adviser is also calling for a serious, bipartisan effort.

“Democrats and Republicans have all agreed for decades that our immigration system is deeply flawed. It is time to finally comprehensively address these concerns,” Rodriguez said. “Immigrants enrich every sector of society and every aspect of American life. They can no longer be Democratic pawns or Republican pawns in political gamesmanship. Each is made in the image of God and acknowledging their dignity begins with addressing their concern.”

While Congress works out the details of the legislation, Biden has signaled he will immediately repeal or replace many of the changes Trump made by executive order, beginning with the ban on travelers from majority Muslim countries. The administration is said to be considering the various countries eligible for temporary protected status as well as increasing the number of refugees the US admits after the previous administration slashed refugee resettlement to historic lows.

Christian advocates for immigrants and refugees are also encouraged that the Biden Administration’s proposal includes substantial aid for Guatemala, Honduras, and El Salvador, in an attempt to address the violence and instability that has caused much of the recent increase in migration. The proposal calls for $4 billion infused into remedies, including foreign aid.

For organizations like the Association for a More Just Society, this is good news. “Central Americans are our neighbors and people looking to migrate are hungry, thirsty and scared after a year of unique challenges,” said Jill Stoltzfus, executive director of the organization that works on human rights issues in Honduras. “We believe aid to the Northern Triangle should be restored so that organizations can effectively confront violence and poverty.”

According to Stoltzfus, the desperate situation of many potential migrants has grown worse than ever with the pandemic and natural disasters, and local civic institutions are in dire need of support. She said that strategic foreign aid to organizations with proven track records strengthening civic institutions in the countries of origin is an effective way of stemming the migrant crisis before it starts, and she and others hope the new administration will embrace this more compassionate approach to America’s global neighbors.

Whatever the administration does, however, the call to Christians remains the same.

“God instructs us to see ourselves when we look in the eyes of the vulnerable,” Stoltzfus said, “and to respond with love.”

Additional reporting from the Associated Press.