For believers under democratic rule, peaceful transitions are “part of honoring and submitting to God’s ordained leaders.”
Kate Shellnutt|January 6, 2021 02:56 PM 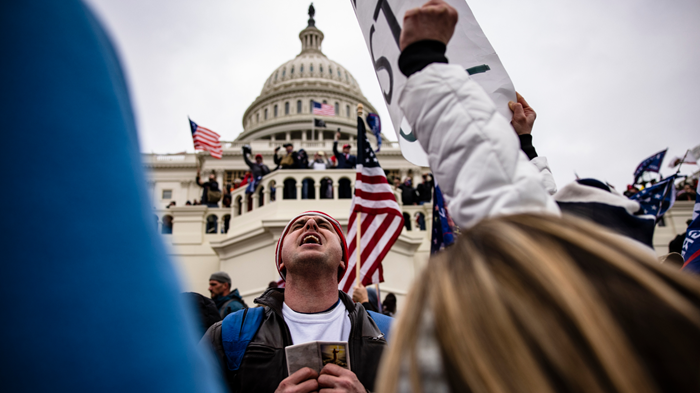 Evangelical leaders, both supporters and critics of President Donald Trump, spoke out and offered prayers for protection as rioters in Washington, DC, clashed with police, putting the Capitol under lockdown.

The swarming of the Capitol coincided with the congressional session to certify President-elect Joe Biden’s electoral college victory, which drew protestors to DC to support the outgoing president and urge Republicans to reject the election results.

In the middle of the two-day Jericho March, as participants circled government buildings to pray for a Trump victory, members of Congress were praying together for their own safety from violent mobs while sheltering in place inside the Capitol, NBC reported.

SBC president J. D. Greear referred to the Christian responsibility to submit to government leaders in a peaceful transition of power and also asked for the president to urge his supporters to back down.

While Christians across the spectrum have decried the behavior of the Capitol rioters, some have pointedly blamed Trump for his refusal to accept the results of the election, while others are calling more generally for a spirit of bipartisan unity and peace.

“Will you join me—Democrat & Republican—in praying for America?” tweeted Greg Laurie, who has repeatedly visited the White House to pray for Trump. “Pray for peace on our streets, for protection & wisdom for our leaders.”

Southern Baptist Theological Seminary president Albert Mohler, who backed Trump in 2020 but has refuted claims of election fraud, put the responsibility directly on the president. “President Trump is responsible now for unleashing mayhem,” he wrote.

Rallying his supporters behind him, Trump has repeatedly suggested Vice President Mike Pence reject the Biden victory, though Pence said he did not have authority to do so.

The president first tweeted in support of law enforcement and, more than an hour after the Capitol breach, asked demonstrators to “remain peaceful.” In a video clip, he repeated false claims that the election had been stolen. He told protesters, “We love you, and you’re very special,” but asked them to “go home now.”

Even endorsers of the president condemned the actions of the Capitol crowds, many of whom were waving Trump flags and Christian flags and dressed in militia gear.

Michael Brown, a Messianic Christian author who voted for Trump, said, “More than evangelicals bringing out the best in Trump, he has brought out the worst in us. Face it.”

Brown spoke out to say a spirit of “lawlessness and anarchy” is always wrong, whether from pro-Trump protestors or “BLM-Antifa rioters.” Tony Saurez, a member of Trump’s advisory board, agreed, praying “God protect our country, our government and our citizens.”

Sean Feucht, the Christian musician and political hopeful known for his worship protests in violation of COVID-19 restrictions, asked those storming the Capitol to stop. Evangelist Jay Strack, a Trump adviser based in Florida, asked followers to pray for leaders in Washington.

Protests also broke out around state capitols where election results were being challenged by Trump supporters, including in Georgia, where state leaders were escorted out of the building for safety, and in Michigan, where Christian protestors appeared to erect a wooden cross in Lansing. During a previous DC protest in favor of Trump last month, vandals destroyed Black Lives Matter signs at multiple churches.